CAA Protests: Is there a method to the Leftist Madness? The sinister intent of what they hope to achieve. 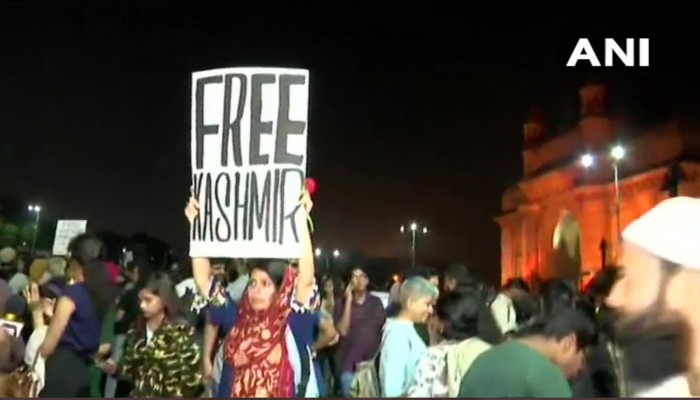 Emulating others is quite common. Individuals emulate another and even societies emulate other societies at times. Needless to say even criminals and destructive forces emulate other such elements. One can figure this out when one sees the present events in historical context. For example in the recently concluded elections in Britain, a group of people came on streets opposing the victory of Boris Johnson. One could easily remember how this was reminiscent of the protests that followed after victory of Donald Trump in United States of America (USA).

While it may seem funny it is also outrageous that the ones who came down on streets were opposing results of free and fair elections. I mean be it USA or Britain, elections were conducted in most transparent terms and the voting was done by masses and yet the protestors were not ready to accept the verdict delivered by the masses? One would wonder how come the protests against electoral verdict have more prominence then the verdict itself.

We witnessed a similar phenomenon in India too. Soon after victory of Narendra Modi in 2014 and 2019 there were sections of society who were not ready to accept the massive mandate given by the people of India. Remember the victory of Narendra Modi led BJP-NDA was no small feat as BJP got 272+ seats on its own in 2014 and in 2019 it even bettered its performance by getting 300+ seats. But most of us are aware about how sections of media, Bollywood, some so called economists, socialites etc. ran a campaign of misinformation and propaganda against Narendra Modi led government.

It was then when I was wondering if there is anything common between the massive propaganda being run against Trump and Modi. Of course on the face of it all looks like some forces who believe in “democracy” want to oust these leaders because they (Modi, Trump) are “fascists” according to them. But is it that simple?

That quest leads me to the book ‘Shadow Party’ by David Horowitz and Richard Poe. The purpose of writing this article is to show glaring similarities in incidents happened in USA with incidents in India and highlight the pattern. The book explains and narrates how a group of politicians and radical elements are working not only to grab power in USA but even weaken the interests of USA and how radical elements in India have put into action the same tactics. The incidents and issues shared in the book are of USA but one can easily figure out that similar tactics are being put to use by the usual suspects in India.

The book refers to Jan Kozak who was theoretician of Czech Communist Party. Kozak explains how small number of communists had grabbed control of government in Czechoslovakia. According to Kozak the communists used the tactic called ‘Pressure from above and below’. The tactic involved exerting pressure for radical changes from two ends that is from upper side using government machinery and from below by using street provocateurs. Kozak explains how communists worked to fill the streets with rioters and protestors and create mass disruption. Objective was to create an impression that the masses want change or masses are opposed to certain policy of government. Once this was done, then useful assets in government and rival political leaders started exerting pressure to cave in to demands of street protestors and create/amend laws and policies to meet their demands.

Does it ring a bell? Have we seen this phenomenon elsewhere? You got it right. The recent protests against Citizenship Amendment Act (CAA) are having the same pattern as explained by Kozak above. A group of radicals started protesting on streets against CAA (Pressure from Below). Their protest (despite being violent and leading to damage of Public Property) was supported by sections of media, Bollywood and other such elements. Then principal opposition parties like Congress and other regional players like Trinamool, AIMIM, and DMK etc. started demanding rollback of CAA (Pressure from Above).

A group even filed petition in Court to stop the government on CAA. Remember the media will try to show the protests as Public Opinion but fact is that the protests are being done by radicals and anti BJP folks who are unable to fathom public mandate of 2014 and 2019. The visuals of protests are being portrayed as Public Opinion but fact is that CAA was part of BJP’s poll promise (manifesto) and public has voted based on poll promises. We all are aware how the ecosystem of street protestors, politicians, activists, group of lawyers are working to weaken the interests of India.

The book then narrates incidents on how radicals have tried to undermine the interests of USA. A careful reading of the same shows similar pattern in India too. It explains how a small group of radicals can push its agendas if the citizens are in dark about the ulterior motives of radicals. The main tactic used by radicals is to misguide the masses and create noise. In one of the incidents a Lawyer (Lynne Stewart) was found helping terrorist (Omar Abdel Rehman) who was charged for plotting terrorist attack in USA. The lawyer not only defended the terrorist but even helped him inside prison which was in gross violation of US laws. Now think again. We have seen how some lawyers have worked overtime to defend and save terror convicts and urban naxals. When the US FBI arrested the Lawyer a campaign was started to save her. One of the organizations that was at the forefront of ‘Free Lynne Stewart’ campaign was American Civil Liberties Union (ACLU). Hang on…I am sure you would have figured out by now that there is an Indian Civil Liberties Union (ICLU) which claims to provide legal aid/guidance/support, active in India too. See how we can still find a pattern even when things look menial on the face of it.

The book further explains how ACLU operates in USA. This ACLU was filing series of petitions in court to ensure, among others, that prisoners of war are not investigated “harshly”, allowing Muslims to cover their heads to obscure their identity on government records, to block National Security Agency from intercepting suspicious calls of terrorists. According to the authors one of the most radical acts of ACLU is to induce local governments to declare their territories as “Civil Liberties Safe Zone”.

The name might sound simple but behind this inducement is a dangerous agenda to ensure that the US Patriot Act is not applied in these zones and there should be no support or cooperation with Homeland security and other federal agencies working to thwart terror threats to USA. Imagine…in the name of Civil Liberties these groups have been making efforts to handicap  the investigating agencies and ensure that Federal laws like Patriot Act which aims to secure USA and its citizens against  potential terror threats are not applied only. Many states and cities in USA under active pressure from radical groups have created “Civil Liberties Safe Zone” thereby obstructing any efforts of federal government to safeguard its citizens. Think if the agency doesn’t have powers and the government does not have enabling laws then how can it secure its citizens? This will lead to anarchy. Again it’s ‘Pressure from above and below’ at work.

I am sure while you were reading the about ACLU and its agenda you must have felt….boss same thing is happening in India too. We have often heard about how some state governments are claiming that they will not let Central government to roll out CAA and NRC in their territories, how some groups  are inducing people to not to show their documents to official agencies (yes, that crappy ‘Hum kaagaz nahi dikhayenge’) etc. Not only this when Atal Bihari Vajpayee led BJP-NDA government had rolled out Prevention of Terror Act (POTA) usual suspects had created a noise to ensure that the law should be rolled back and shockingly when congress led UPA assumed office in 2004, it actually repealed the law.

As if this was not enough, the same Congress led UPA government denied permission to the then Narendra Modi led Gujarat government from having an anti-terror law even when identical law was prevailing in Maharashtra. These things show how radical elements irrespective of the country are working in sync to weaken the state. One would wonder that why should a so called civil rights organization oppose anti-terror law when terrorists themselves have no respect for human values. We had also seen lot of noise from usual suspects when surgical strikes were conducted by our armed forces. Why would one question potential of country’s armed forces and give credence to India’s adversaries?

There are many aspects in the book which the reader would feel are applicable in Indian context too. My objective to draw parallels from the book and things happening in India is to show that we might feel that these are spontaneous protests but no, these are well coordinated efforts to ensure that the state is weakened from within. Think who benefits from a weak USA or weak India. I am sure we all know the answer.

PS: The book actually has highlighted how controversial philanthropist George Soros operates. It’s a must read for anyone trying to understand the madness that gripped streets of USA after victory of Donald Trump. We have seen similar outrages in name of church attacks, lynching, women safety, infant deaths from usual suspects in India. The recent protests against CAA, NRC and while I am writing this, the prevailing unrest in JNU are all hinting towards a pattern followed by radicals. I am hoping that security agencies are keeping close vigil on these elements hell bent on destabilizing Indian state.