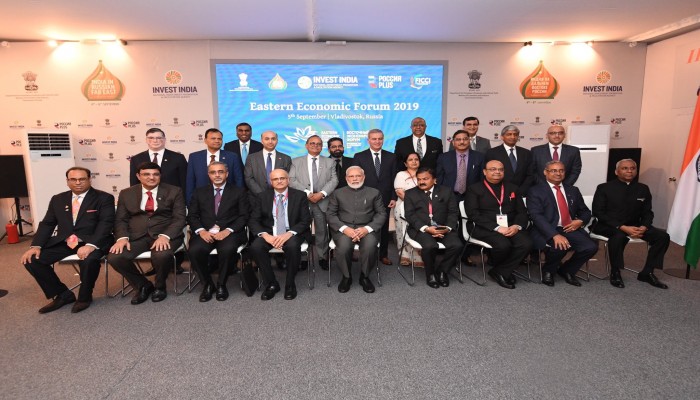 Modi’s iconic visit has many firsts to its merit- Narendra Modi became India’s first Prime minister to visit Russian Far East, for the first time India has extended line of credit to a specific region of a country which culminated in the unveiling of “Act Far East” Doctrine as well. In April Narendra Modi became the first Indian Prime Minister to be conferred the highest civilian award of Russia-the order of the Holy Andrews Apostle the first. But Modi wasn’t bestowed the honor during his current visit as it is awarded in a special ceremony held at Kremlin. Russia’s highest state decoration is a recognition to the exceptional services rendered by Modi in fostering Special and Privileged Partnership between the countries. Inviting India to be a chief guest at the EEF is a testament to India’s growing global profile and rising prominence in geostrategic calculus.

Russia which spans two continents is a predominant power in the Eurasian landmass with Pacific maritime boundaries.  Russian Far East a part of Siberia is the eastern most territory which extends between Lake Baikal to Pacific Ocean. It shares land boundaries with China, South Korea and Mongolia; and maritime boundaries with Japan and the US. Europe’s declining markets and the alienation by the West post 2014 prompted Russia to evolve a strategy for Asia, the engines for growth to resurrect its economy. Russian began actively engaging with potential players- South Korea, Japan, Indonesia and Vietnam. Facing the predicament of unreliable Trump’s policies, seeking to resolve territorial disputes with Russia South Korea and Japan actively responded to Russian overtures. Unrelenting sanctions regime, geopolitical and economic compulsions has driven China into Russia’s arms. Soon, China became its largest investor and trading partner. Russia-Chinese cooperation intensified.

Keeping historical hostilities at bay, Russia closely allied with China, advocated BRI, supported Chinese initiatives and adopted even the controversial Huawei. But China’s growing stranglehold over Central Asia Republics (CAR) irked Russia. As an erstwhile superpower keen on reclaiming its past glory Russia refuses to be second fiddle to the Middle Kingdom. Russia is discomfited by China’s relentless aggressive posturing. To contain China’s expansive penetration into Eurasian region under check, Russia as a founding member facilitated India’s entry into Shanghai Cooperation Organization (SCO).  Akin to the US, which prefers to hoist India as a strategic counter to China, Russia is buttressing India as a balance to China’s expanding influence in the region. Also, worried about India’s closer engagement with the US under Indo-Pacific construct and apprehensive of America’s foreign policies that can force India from buying military supplies Russia reenergized its engagement with India.

Instituted in 2015, Russia holds annual Eastern Economic Forum Summit at Vladivostok to promote foreign investment in the Far East. Till far, China is the biggest investor in the Far East. To reduce Chinese dependence and curtail its sway Russia opened the region for investments. So far 17 countries invested in the region. Russia unveiled investor friendly policies, established 20 Special Economic Zones (SEZ) and developed five free ports in the resource-rich Far East. Moscow simplified visa issuance procedure for 18 countries including India to the Far East. Due to Russia’s concerted efforts, this region alone registered 4% economic growth and received nearly 30% of total investments. Hostile climatic conditions, frozen lands and nine long winter months pose greatest hurdles in the development of this region which is scantly populated. To take advantage of India’s sizeable demographic dividend and skilled manpower Russia has invited India as the Chief Guest of EEF.

The Far East is Russia’s gateway to the Pacific and this region reinforces Russia’s Asian identity. Speaking at the EEF, Modi recalled India was the first country in the World to open consulate at Vladivostok and announced $1billion line of credit towards the development of the region. Modi said Far East will become bedrock of strong Indo-Russian ties. Unlike the China’s BRI (Belt and Road Initiative) that threatens nations into a debt trap, India’s developmental aid will be viewed favorably. To foster development, countries brought about paradigm shift in economic diplomacy by promoting active collaboration between private companies as against set precedent of intergovernmental agreements. Private entities of countries signed 35 agreements worth $5 billion. South Korea, Japan, Malaysia, Mongolia, India has set up stalls at EEF.

In the run up to the EEF, Modi encouraged the chief ministers of BJP ruled states to travel to the Far East along with business leaders to assess scope of investments. Indian Chief Ministers held talks with 11 governors of Far East to explore more opportunities. To boost Indian engagement Modi unveiled “Act Far East” policy and asserted, “Let us deepen the bond between India and Russia even further. India is proud of the achievements of the Indian Diaspora. I am sure in the Russian Far East too the Indian Diaspora will make active contribution towards the region’s progress”. Modi assured that partnership between rapidly growing India and its talent with the region is “historic-one plus one equals to eleven opportunity”. With leaders of Japan and Malaysia on the stage Modi stated, “Our relations in this region will have a strong foundation of rule based order, respect for sovereignty and territorial integrity and abstaining from interfering in the internal affairs of country”.

Another important facet of EEF is expanding cooperation with countries in the Asia-Pacific region. Russia never openly endorses the Indo-Pacific construct promoted by “The Quad” and by consequence doesn’t accept Free, Open, Inclusive Indo-Pacific (FOIP). It religiously sticks to connation of “Asia Pacific” like China. But much to the chagrin of China, the joint statement after the summit meet read, “India and Russia as stake holders in this common space agreed to intensify consultations on complementarities between integration and developmental initiatives in greater Eurasian space and regions of India and Pacific Oceans”, indicating a tacit acceptance of FOIP. This alignment of Indo-Pacific and Asia-Pacific is a phenomenal feat.

India a resident power of Indian Ocean has hardly any presence in the Pacific. Russia which is a strong power in the Pacific is insignificant in Indian Ocean. Besides strengthening maritime cooperation India’s extensive engagement with Russian Far East will make them responsible stakeholders in the maritime security of Pacific and Indian Oceans respectively. The partnership can bring semblance of peace and stability in conflict prone maritime commons and ensure free navigation. Also, Russian Far East can become India’s gateway for the North East Asian markets.

To sustain global rivalries, countries are adopting hedging strategies to counter expansionist aspirations of major powers. Driven by common interests’ countries are coming together. New security arrangements and alignments are becoming the order of the day. EEF provided a unique opportunity for India and Russia to expand avenues of cooperation to withstand turbulent geopolitics.