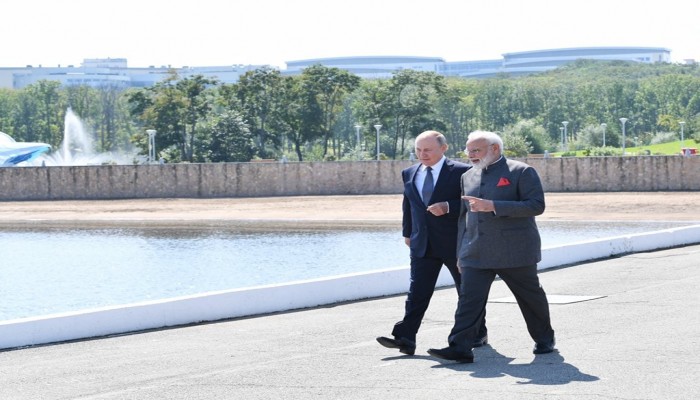 Prime Minister Narendra Modi on his first bilateral visit to Russia in his second tenure infused new energy into Indo-Russian longstanding partnership. Expanding the scope of ties which have been largely directional and centred on defence cooperation both leaders explored various avenues to strengthen the partnership. After the formal consolidation of the strategic partnership between the countries in 2000 both countries regularly held annual summit meets. Giving fillip to the longstanding ties, in 2010 countries elevated partnership to “Special and Privileged Strategic Partnership”.

Economic sanctions imposed by the West post Crimean annexation badly crippled Russian economy. Since 2014 Russia economy is in doldrums. Keen on pulling the nation out of the economic stagnation, Russia has turned its focus towards developing the Far East, a resource-region, double the size of India. The region has become a quintessential part of Putin’s Pivot to Asia strategy. To steer its development, Russia invited investments from 17 countries. Underscoring the importance of the region, President Vladimir Putin hosted 20th Indo-Russian Annual Summit Meet at Vladivostok.

After receiving Modi at Vladivostok, both leaders spent quality time together in a boat on their way to Zvezda Ship Building Complex. As a special gesture, Putin accompanied Modi to Ship building complex and showed him the most sophisticated ice breakers used in Arctic explorations and oil tankers that deliver hydrocarbons to India. With economic cooperation high on the agenda of bilateral talks, a 50-member delegation of Indian businessmen also travelled to Far East.

Since independence, India heavily depended on Russian defence purchases. Nearly 70% of Indian military hardware is of Russian origin. Russia has been India’s top most defence supplier for decades. Converting the buyer-seller relationship to co-production countries have strengthened defence cooperation. But India’s diversification of defence purchases and the volatile geopolitics created wrinkles in partnership. While India drifted towards the US ratcheting up economic and defence cooperation, Russia eventually got drawn into Chinese orbit and began eyeing Pakistani markets for defence exports. Western sanctions on Russia and its burgeoning economic reliance on Beijing further created some kinks in the partnership. Amidst turbulent geopolitical realignments, India asserting strategic autonomy made every attempt to strengthen ties with its old strategic partner. Reaffirming its trust, with Damocles Sword of the US sanctions hanging, India sealed an agreement for the purchase of Russia’s S-400 Triumpf Missile System last year. Defence cooperation has been central pillar of Indo-Russian partnership. To fortify strategic partnership, leaders focussed on “reaching new heights of cooperation through trust and partnership” at the 20th Indo-Russian Annual summit.

After reviewing the progress of the bilateral talks during the delegation level talks leaders prioritised strong and multifaceted trade cooperation to expand the range of Indo-Russian ties. Stressing on the need for increasing the bilateral trade which hovered around $11 billion, they set an ambitious target of $30 billion for 2025. Thus far, Indo-Russian trade and investment has been between government entities. In a marked departure from the past to boost investments, governments began encouraging the participation and collaboration between private companies. India invited Russian companies to be part of “Make in India” initiative and Russia is encouraging Indian investments in the Far East region. To facilitate seamless trade countries are working towards streamlining and standardising various procedures. Leaders proposed trading agreement between India and Eurasian Economic Union (EAEU) and began holding annual strategic economic dialogues.

Post 2014 Russia carried three quarters of trade in Rouble and in line with its sentiments, both countries agreed to promote mutual settlements in national currencies. To foster India’s investments Russia has recently opened Far East Investment and Export Agency in Mumbai. Further to this initiative, Moscow welcomed a delegation of Indian Chief Ministers to explore various avenues of cooperation. China holds a sway in the Far East region and an uncomfortable Russia is looking towards India to supply skilled manpower.  Russia is largest producer of diamonds and India’s diamond cutting companies which moved to Far East are working in tandem enhancing its marketability. Having overcome the tyranny of distance, both countries stand benefited. By creating investor friendly atmosphere Russia is attracting private investors to the region. Taking a call, Indian Coal mining companies began operations in Far East. In a bid to mainstream Far East in 2017, Russia held joint exercise with India at Vladivostok.

Boosting cooperation in energy sector, countries agreed on geological exploration including Arctic region and joint development of oil fields in India and Russia. To this end, countries signed a road map for cooperation in hydrocarbons for five years and explored the possibility of transporting LNG through the Northern Sea Route and oil pipelines.

Connectivity has been another bottle neck in Indo-Russian trade. Aside, expanding direct passenger and cargo flights, countries decided to use Vladivostok to Chennai sea route to cut down time of travel to 24 days from 40 days. This route will potentially bring much needed peace and balance to the South China Sea region. Strengthening the five-decade long space cooperation, Russian Space Agency Roscosmos, offered to train four Indian Astronauts for India’s first Manned Mission- Gaganyaan for fifteen months.

Another important facet of Indo-Russian strategic partnership is military cooperation. India will be part of Russia’s multinational military exercises Tsentr, in mid-September. Besides, Central Asian countries and China, some reports hinted at Pakistan’s participation. Despite the ongoing hostilities with Pakistan underlining strong military links with Russia, India will take part in joint drills. Upgrading defence cooperation countries agreed to co-produce the military spares for Russian origin weaponry under the Make in India initiative. In all, countries exchanged 14 MoUs in the areas of space cooperation, trade and investments, coproduction of military equipment, road transport, maritime connectivity, infrastructure, hydrocarbon cooperation and others.

In an oblique reference to Pakistan, Modi asserted that India and Russia are against any external interference in internal matters of member countries. Both countries stressed the primacy of international law, need for multilateralism and condemned terrorism in all forms and manifestation. Leaders called for an Afghan-led and Afghan-owned reconciliation and extended support to efforts for complete restoration of peace in Afghanistan.

Given the looming geopolitical uncertainties, development of entire gamut of India- Russian ties is a top priority of foreign policies of both countries. Keen on expanding scope of cooperation, leaders have explored every possible avenue to cultivate ties and increase engagement.