The Hermit and His Bunker 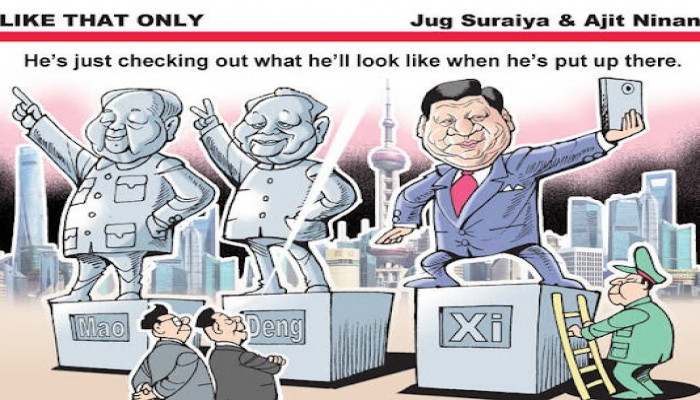 The tribe of Alexanders, Napoleons, Caesars, Hitlers, Stalins, Maos and many more of this world were men who sought glory for God, empire, nation or people they represented. They audaciously upset any status quo to ruthlessly establish a new order by doing what they considered was right. They strode paths which angels feared to tread. They took risks beyond normal imagination. They made the rules with all available means. Such men were single minded hermits whose life mission was beyond money or riches or fame. They were the products of the conviction of their divine destiny. Such hermits appear once or twice in a century. Xi Jinping is closest to such a hermit in this century. However, there is a difference. The hermits before Xi created history and it was scripted thereafter.  Xi the hermit, is writing his own history before making it! Such pre-history needs closer examination.

Xi the Hermit is leading the middle kingdom to its preordained role in the world from his bunker.  He is building national strength to rejuvenate the great Chinese nation, achieve the Chinese dream of reunification and take revenge on the ‘Century of Humiliation’.  As per him “China is facing a severe national security situation, with unprecedented external pressure, traditional security threats and non-traditional security threats are intertwined, ‘black swan’ and ‘gray rhino’ events occur from time to time”. Xi is the transformational leader essential to steer China to safe shores in this period of great uncertainty. In this new era, he must also take China to heights greater than which his predecessors ever thought of. He has to therefore continue in his role for life to see through China’s third rise. This pre-history is being scripted by the great CCP propaganda machinery. Wonder whether it is the Third Rise or Reich?

China’s first rise occurred when Mao led ‘the long march’ against imperialistic oppression and brought it freedom. He annexed Manchuria, Tibet, Xinxiang and Mongolia into the Chinese nation. He defended the nation against the USA in Korea, against India in Tibet and against Vietnam; to teach all of them a lesson. He secured the borders of present day PRC. However, Mao’s “Great Leap Forward” and “the people’s commune movement” ended in mass famine and millions of deaths. He brought misery to the people. His “anti-right” obsession led to constant strife and purges. It weakened the Chinese nation. From 1966, Mao’s “Cultural Revolution”, plunged China into a decade of chaos and violence. The CCP now officially describes the Cultural Revolution as “a catastrophe” and “10 years of turmoil”. Mao is an epochal leader and deserves a defining status in PRC. But then the real Hermit was yet to arrive.

China’s second rise happened when Deng led it to prosperity. Deng, is officially accredited to opening up China to the world and in reforming the ills of the Cultural Revolution. Though he is still widely revered in China, Tiananmen happened in 1989 under his watch. It was caused by external as well as domestic forces. Though the crackdown was necessary, the event was a period of “political turmoil”.  Deng and his handpicked successors — Jiang Zemin and Hu Jintao took China to great wealth and prosperity.  However, inequality, corruption, political indiscipline, lack of faith in the party, pollution and inefficient growth set in. Things were adrift.  China’s “capacity to safeguard its national security was lacking”. The Hermit had to arrive and Xi Jinping did.

In nine years, Xi Jinping has changed China’s politics, economics, foreign policy and diplomacy. He has reversed the ebbing tide to set China’s course to greatness. His ‘Thought’ will edify China’s modern history. It will be taught for generations in classrooms, textbooks and films. Xi has widespread public support for attacking corruption, reducing poverty and projecting Chinese strength to the world. All these achievements (sic) have been reverentially chronicled by fawning Communist Party biographers in the newly minted pre-history. Roughly two-thirds of the official history of CCP is now devoted to Xi. If the Party is absolute in China, Xi is the absolute of the Party. He is now scripted as China’s most consequential leader of its history. Ah ha. The hermit of Hermits?

Xi Jinping has skilfully manipulated the images of Mao and Deng. He has extolled them at one breadth and denigrated them at another. China had “massive achievements” in their period. There were severe setbacks also. He has subtly proven that while Mao and Deng were tall, he is the tallest of them all. He is that great visionary who is melding the best of Mao’s ‘cultural revolution’ and Deng’s ‘opening up’ while consciously avoiding the pitfalls of Gorbachev’s, ‘glasnost and perestroika’. He is weaving a powerful tapestry to make China truly the Middle Kingdom. This is when Xi Jinping becomes the Hermit.

In 2012, even as he assumed power, he had expressed concern at China drifting from its revolutionary roots. People were losing faith in the party. Hence, Xi the Hermit has fallen back on Mao’s revolutionary heritage by re-introducing communism with Chinese characteristics. Hence the “common prosperity” program to rein in economic inequality. The “dual circulation” to boost economy internally and all out efforts to strengthen China’s homegrown technological capabilities are signs of a reformer in the Deng mould. While the external environment is full of new dangers and challenges, there are also great opportunities. The Hermit has therefore expanded China’s international circle of friends and influence proclaims the new history. The sheet anchor for world domination and “building a community for the shared future of mankind” is the BRI. He is making the strongest Army in the world to realise the Chinese dream to be the undisputed world power to set the new international order. He has gone far beyond Mao or Deng.

The Hermit retreated into his bunker to eliminate the  coronavirus and secure his extended rule. He has to consolidate. I had earlier written that “Xi Jinping has been signalling an inward turn on domestic issues and a reluctance to compromise on the global stage. Xi Jinping is not really too bothered about the steady decline in China’s global reputation till such time he has all of China on a nationalistic high. International domination rather than cooperation is his mantra. However, Xi Jinping’s greater priority seems to be to stay in power and to be considered the greatest all time Chinese leader. The leader in his bunker and is directing China’s wars on his  terms and pace”. However, there is more.

For the Hermit to be considered taller than Mao and Deng he has to unify Taiwan into China, and keep USA at bay in the bargain. If he cannot do that, he must look at the poor man’s option. He must get hold of some part of China’s claims in Indian territory. Otherwise, his “Thought” will find place only in the dustbin of history. He understands that. Logic also suggests that attempting either is a high- risk affair. China has to prosecute conflicts in environments in which it has no experience. The outcomes are foggy, look bleak and defy logic. Kissinger feels that despite China’s provocative posture and military build-up it will not invade Taiwan in the next ten years. Is he discounting the Hermit?

For the past nine years the Hermit has turned logic on its head.  The post Mao Chinese leadership succession system was put in place by Deng so that China does not have another Mao or internal turmoil, purges and famines.  In the absence of a constitution or an edict, Deng evolved a Party system to set time limits on leaders in power, to anoint a successor and fade away. China attempted to avoid a Mao but got Xi instead. At this point, Xi has eroded the time limit, there is no successor in sight or no fading away. The Hermit has methodically purged his competitors through anti-corruption drives. He has not baulked at interning a million Uighurs, and lately Tibetans also. He seeks to dominate the oceans with the greatest military on earth, and exploring new frontiers in space. He is actively expanding China’s borders - South China Sea, Hong Kong, Eastern Ladakh, and Senkakus. Taiwan, the prize jewel is in active sights. His concept of Lebensraum for China is larger than what Hitler dreamt of for Germany. He has reversed China’s course back to communism. Is it the third rise of China or the Third Reich of the Middle Kingdom? You decide.

However, the Hermit’s situation is a bit more complicated. Unlike all those before him, he has to first destroy the Mao and Deng legacies and then create his own.  If Mao had a famine, Xi has the virus.  Hence, he has to take China to greatness as the virus is ravaging the economy and his people are getting old. The Virus is playing havoc in the West despite good and proven vaccines. The Chinese vaccines are ineffective and his people are vulnerable to the virus.  If he drops the Zero Covid policy, the virus will rage China and the dream will evaporate. If he waits for the virus to subside, his people will get old and decline. If he waits for ten years to annex Taiwan as forecasted by Kissinger, China will be an old pacifist nation. The Hermit is a man driven albeit with a deadline. If he cannot achieve greatness for China in the time he has, he is part of a historical heap. ‘Prepare to fight’ is what he has been messaging, of late, to his people. Will he defy the odds from his bunker? Will he attempt to annex Taiwan militarily? If he cannot do so, he must turn to India. Make no mistake. It is not a matter of if but when. Any guesses on When? Your guess could be better than mine.

Image provided by the author,