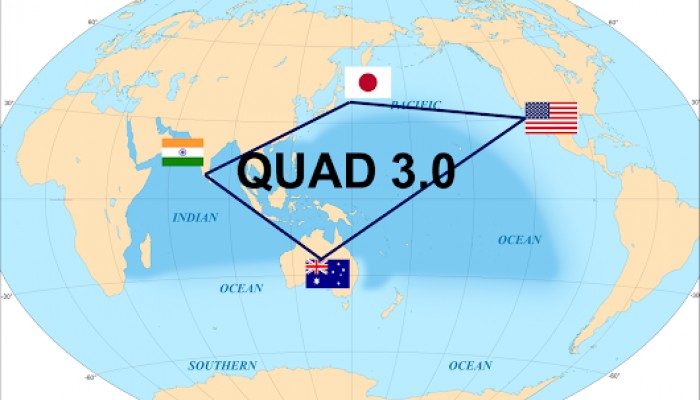 The Core of The Centre of Gravity

If the Indo-Pacific is the centre of gravity of international geopolitics and economics, its core is China’s rise. China’s ‘Dream and Rejuvenation’ was fine till it was peaceful. However, its military and economic assertion, threats and coercion, to impose a Chinese global order in accelerated time frames is unacceptable. China took advantage of the pandemic driven humanitarian crisis to reprehensibly progress its geopolitical ambitions.  To top it all it painted itself as the victim of a crisis it virtually perpetuated.  Chinese actions drove the QUAD nations to coalesce. However, the idea has not progressed to its logical conclusion. With new administrations in USA and Japan settling in, there is a consensus developing.  QUAD 3.0 is coming alive, hopefully to stem the Chinese tide. In my  last article I outlined a few issues which need to be considered to take the QUAD 3.0 concept forward. In this article, I shall focus on ‘Six Strategies’ which QUAD 3.0 needs to adopt.

The resolve of QUAD 3.0 nations is clear with the pace at which their dialogue and consultation is progressing. However, Quad 3.0 needs to have a flexible outlook. In the larger context of the Indo Pacific region, QUAD 3.0 should prevent Chinese domination to keep it ‘Free and Open’. Within the tighter grouping, there should be no ambiguity.  QUAD 3.0 should aim to contain China. This dual approach will be required since QUAD 3.0 will be the multilateral – multi-mechanism platform. These mechanisms could be evolved with European, ASEAN or other regional players. Also, action will have to encompass military, diplomatic, economic and health domains. All actions taken by QUAD nations must reinforce each other’s strengths, accommodate sensitivities and cover vulnerabilities. Further QUAD must leverage strengths of regional and extra regional players on an as required and case to case basis to achieve its aims. Hence the necessity to have a broad and long-term strategy. As the strategy evolves the QUAD nations themselves have to get into a formal grouping.

At this juncture, where does China stand? Depending on one’s viewpoint and beliefs, China is either a high-speed bullet train or a crashing meteorite. The real truth is somewhere in between. While China has controlled the Virus well, its population remains vulnerable. China does not have the capability to vaccinate all its people to achieve herd immunity for the next 2 years. Every outbreak hereafter will witness widespread lockdowns. This imposes economic penalties when compared to other countries which achieve herd immunity and are economically rebounding. As the virus fades, the aging demography will assert itself; if the plummeting birth rates – their causes and implications are any indicator.

China’s economy is also seeing unusual signs of bankruptcies, asset bubbles, reigning in big businesses, manufacturing dips coupled with arrest/wing clipping of high-net-worth dissenters. Civil society in China is virtually wiped out. Chinese overseas BRI investments are not paying off. Their praiseworthy technological prowess has limitations despite being driven by single mindedness. Chinese ‘Wolf Warrior’ diplomacy is now a brand incapable of eradicating the trust deficit created by flagrant violation of the International rules-based order. It leaves China bereft of allies’ sans Pakistan and N Korea. Chinese effort to have the greatest military on earth is a work in progress. The huge PLA is yet to achieve full mechanisation. Ability to fight an Informationised battle is far. Most importantly, PLA is not a fighting machine with brilliant generals’ like Rommel, Von Manstein or Von Rundstedt led by a messianic Hitler. It is a political Army led by an ambitious authoritarian leader aspiring eternal power. It is far from being a world beater; with a proven track record of military failure. Does it approximate to the aggressive China confronting the QUAD? Ponder. It is in this context that we need to examine the available strategies.

Strategy of Military Overstretch PLA needs to be stretched to prepare for THREE conventional scenarios - an amphibious crossing to annex Taiwan, naval domination of the Indo-Pacific and a conflict in high Himalayas. In any military undertaking it should face a TWO front scenario as it did in the past nine months. It should be drawn and committed militarily in ONE hybrid front. Pakistan and CPEC are a ripe possibility which is already developing into a hybrid front. It can be fuelled. Essentially a 3-2-1 concept. In all cases, QUAD 3.0 should aim to continuously change force ratios and capability to shift PLAs goal posts. This will force it to commit more resources than it has. PLA has a Stability – Instability paradox. Its leadership is very stable at the top. On ground there is instability, at the bottom – lack of initiative and experience. A conscript armed force of this magnitude often lacks motivation which is apparent in the PLA and contributes to lower instability. All this will keep stretching China not only militarily but will pose a burden on its plateauing economy.

Strategy of Five Instabilities China has five instabilities and all of them pertain to non-Han population in its outer periphery– Tibet, Xinjiang, Taiwan, Mongolia and Hong Kong. These challenge the core principle of ‘One China’. Most importantly, the five instabilities can keep Chinese focused inwards. The issues involved range from basic human rights to persecution of minorities to religious freedom to forced labour camps and extending up to genocide. These instabilities can also tie down PLA militarily. Overall, these instabilities make the leadership nervous. They have huge inter-relationships and can be made interoperable. They will keep China on its toes in all international fora. This is a low-cost strategy which can be kept on play day in and day out with great dividends.

Strategy of Diversion QUAD 3.0 must divert the economic flow away from China. At the root, supply chain relocation away from China will contribute immensely to lowering Chinese capabilities. However, it must be done in a planned manner over a period of time. The Supply Chain Resilience Initiative platform is available for expansion. QUAD 3.0 needs to embrace it. Also, QUAD 3.0 needs to provide an alternative to the BRI and a way out for debt trapped countries. In any analysis, the QUAD nations have the best credentials of strong economies with ability to consume, produce, and innovate. QUAD 3.0 must have an economic agenda. It will contribute to containment of China as also boost their own economies.

Strategy of Bleed China must be made to bleed economically in the BRI and CPEC. Already some of it is happening in Pakistan. A failing Pakistan is at the intersection of conflicting geopolitical interests depending on the way one looks at it. These can be leveraged through external and internal pressures to make Pakistan into a bleeding Chinese artery. Every base which China is establishing will end up in hybrid environment on its own eventually. If China wants to be a super power to lay down the rules of the international road it will have to write them in blood just as the USSR, United Kingdom and USA have done so before. It must not be allowed to get away with being a purveyor of money bag power.

Strategy of Denial The strategy of denial is multi domain with vast scope.  Some issues are highlighted here. Despite all its progress in technology, China still lacks some critical aspects of agricultural technology and it relies on imported seed. Food security fragility is a new emergent phenomenon in China. It has shortcomings in critical components of core manufacturing technology. China will continue to be energy dependant and its Malacca dilemma must continue. It is making a beeline towards the Arctic for future energy requirements.  It seeks diplomatic space specially in situations like Myanmar or Sri Lanka. China also seeks additional bases in the Indo-Pacific. Strategic denial of elbow room for China to break away from its constraints or expanding its interests will be very useful. It will contribute to prevention of domination of the Indo-Pacific as well as its containment.

Strategy of Loss of Face China has a huge historic liability. Its highly efficient long term centrally planned programs are often disastrous. The economics of the Great Leap Forward and the impact of the One Child Policy are prime examples. Its ‘Peoples War on the Virus’ and ‘Vaccine Diplomacy’ are likely to end with a similar loss of face. Its inability to produce vaccines of quality and in numbers leave it vulnerable. Eventually its vaccine diplomacy is bound to fail. There are indications of this already. It is likely to fail due to inability to reach herd immunity and being forced to contend with repeated flareups. A country which cannot help itself cannot help others! The Chinese self-image and ‘Face’ is important. USA and India in particular have the capability to put in a cogent strategy to effect loss of face to China.

The strategies outlined span multiple domains. They are being put in place already through individual / bilateral/ group efforts in some manner. It is not a revolutionary thought process. The effort here has been to highlight the possibilities of combined action.  One should not lose sight of the fact that China is too big to rein in by one or two nations alone. It will need a wider set of capabilities. China must be made to behave like any other normal nation. Also, China will come up with some counter strategies. That is par for the game. Need to tackle it together. What is given here is only a frame work thought process. It can be modified as per circumstances. Also, all partners need not be involved in executing all strategies. Also, execution can be through/in concert with other regional/extra regional players too. However, the most important thing is that QUAD 3.0 must first firm up itself.  It must define for itself what it wants to achieve within its limitations, differences and realms of possibility. QUAD has to stop being an IDEA and must manifest itself in definable form. That is the primary challenge before USA, Australia, India and Japan.

All Images are provided by the author.