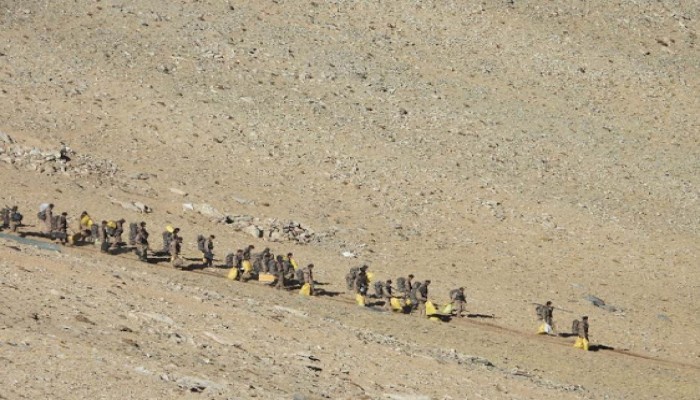 Questions to the Fore

The Sino-Indian Logjam is under disengagement. It has proceeded smoothly so far. The common question is - What will the Chinese do next? Is their withdrawal part of a larger strategic design? Will the Chinese regroup and get back at us? If so, what will they do? All these valid questions stem from one fact - the Chinese cannot be trusted. China came to overpower India militarily. However, it was surprised by the Indian response and forced to withdraw. For any aspiring superpower like China, being forced to vacate a captured area is demeaning. Especially, after advertising the captured areas as sovereign to it. To quote Sun Tzu, India has subdued China without fighting. That is the acme of skill. Notwithstanding all the spin and propaganda, this withdrawal will rankle China. They will itch to come back and sort us out. Hence, we need to assess as to when and what they can do, if at all. It is only then that we can come to some logical surmise.

Political success or failure is not guaranteed by a win or loss in war. Churchill was voted out despite success in WW2 and Saddam Hussein continued in power despite losing in Gulf War1. Both are high risk professions with unpredictable outcomes. Will Xi Jinping take a risk to pick up a bone with India militarily in the CCP Centenary year? He will be busy in all probability, consolidating his ‘reign for life’, which could now come under a shadow. The Beijing Winter Olympics are scheduled in 2022. There is talk of boycotting them due to human rights and genocidal issues in Xinjiang. They are being equated to Berlin Olympics during Hitlers period. Another conflict with India will highlight the Tibetan plight.  China’s behavior in the run up to 2008 Beijing Olympics is noteworthy. They went to extraordinary lengths to put on the ‘good boy’ act.  Politically, a war / conflict/ skirmish with India will not be in their playbook. In fact, the current disengagement indicates acceptance of military losses to retain political face.

The 1st strategic priority of China is Taiwan and South China Sea. Eastern Ladakh is their least strategic priority as per their White Paper of 2019. Any action here is at the cost of their main priority and might put them in a two-front situation. For all inexplicable reasons, they got into a two-front situation with eyes wide open and could not achieve their aims. Obviously, a heavy miscalculation. A major commitment along the LAC in future does not guarantee success. Further, they have to assess their own economy and the Virus situation. The future does not seem as certain for China as it was in Apr 20 when it was the only country which had a grip over the Virus. Their geopolitical situation is not improving. To remount an adventure into India anywhere else in the near future is difficult to imagine.

Any conflict with India destabilizes not only the border areas but also hinterland Tibet. In this conflict itself, the Tibetan issue has been raked up. There have been calls in India for using the Tibet card. So far India has not used it overtly despite USA raking it up. A return to conflict might see India using the leverage of Tibet in an overt and planned manner. Then they will be stuck in an escalating hybrid situation. Hence Xi Jinping’s program to ‘solidify Tibet’ and his legacy will be in jeopardy. If Tibet is hyphenated with Xinjiang, as it will, there will be further problems. Forget one China. We might see many Chinas! Will China risk it?

Conflict with India has propelled the formation of QUAD and has strengthened Indo–US strategic partnership. Through de-escalation of the current situation, China hopes to stem the tide.  India has been the reluctant partner in the QUAD. If China rekindles the conflict, then India will lean conclusively totally towards USA and QUAD. A loosely aligned QUAD can turn into an Asian NATO which China fears.

Indian strategic confidence has grown. China was clearly surprised by India’s non-military response through digital strikes and economic actions. This lead was followed by many countries The Indian public was antagonized. Many Indians / PIOs have gained prominence internationally. The anti-China wave prevalent in Indians/PIOs could force multiply the international anti-China sentiment. Overall, the implications are far reaching.  Surely China is aware of the risk.

China undertook this misadventure probably with the premise that Indian infrastructure was poor, the Army was ill prepared, poorly equipped and badly affected by the Virus. The misadventure was undertaken from a relatively stronger position. Their superiority in Comprehensive National Power should have guaranteed them victory. However, they could not even achieve their aims (whatever they were) despite obvious military advantages. Conversely, with time, Indian infrastructure and preparation improved. The Chinese edge was bunted. Improvement that was to happen in 5-10 years was fast forwarded in 9 months. With improving military capacity and border area infrastructure the gap between Chinese and Indian capability will further narrow. The Indian outlook is shifting to an offensive one and its defenses will become formidable. As this happens, the chances of an easy land grab and coercion will keep receding. If China could not enforce victory when it had all the cards, can it do so as India grows stronger?

By now the psychology of defeat would be setting in. They lost in Nathu La. They lost in Sumdorong Chu. They lost in Doklam. They have lost in Eastern Ladakh. Notwithstanding all their propaganda, external posturing and internal showcasing through fake videos, their leaders know the realities of outcomes. Soon they will be into analyzing this defeat-strategically and tactically and wondering as to how to defeat Indians. Every attempt has been repulsed. Their politico-military leadership will not only be perplexed but heavily demoralized. We have learnt from our defeat in 1962. It is time for China to learn from four ‘salami slices’ of defeats. Recovery from this psychology will be difficult. I doubt if they have a Manstein to deliver a ‘Backhand Plan’.

Ever since November, the Chinese have been wanting to disengage. When disengagement was agreed to, they went back in an unseeming hurry after being forced to raze their defenses. Such a disgrace. The Mass of PLA went with an astounding rearward Velocity. Now, Mass x Velocity is Momentum. This rearward Momentum is difficult to stop or reverse. It is a mixture of the mental and the physical. On the other hand, the speed with which India could mobilize and stymie the PLA indicates a ‘controlled’ forward Momentum. As time passes and infrastructure improves, this Momentum will be overbearing. Also, the lack of PLA willpower, and battlefield stamina was apparent throughout the campaign. The ‘Stability at the Top- Instability at the Bottom’ paradox of the PLA revealed itself. They never came to grips with the environment. A defeated army will take time to recover. There will be some deep analysis at tactical levels. I suspect heads of scapegoats will roll to add to the tally of their casualties in Galwan and due to the Himalayan weather. Honoring a few people for their bravery to assuage internal audience is only lip gloss.

A very major differentiative factor in this episode has been the quality of soldiers. The Indian soldier has come out to be experienced, steadfast, tough, hardy, motivated and well trained and mobile in mountain warfare. The Chinese soldier has come out to be a relatively static weakling unable to cope with the harsh reality of terrain. High altitude fighting is not a joke. All this without even a shot being fired. The Chinese ‘single child’ soldiers might not be steadily under fire. I suspect that they will break fast. I am sure the Chinese know it. The PLA can be well kitted and equipped. Unless they have good troops, they will not win. Unless they have good leadership, they will lose. The man behind the machine matters. My personal opinion of the PLA – ‘Nalayak ka Basta Bhari’.

Disengagement is still a work in progress. Leaving that aside and taking all these issues into consideration it is my fair surmise that China will not be keen to rake up a major issue till 2023. They will have to rethink, reorganize, retrain and rebuild. In the meantime, we should evolve to a higher level of overall preparedness. Will things be quiet till then? No. We must expect pinpricks and probing aggression all along the LAC. China will take advantage of any weakness. What we can also realistically expect is military moves through Pakistan, Nepal, Bhutan, and Myanmar. Expect a whole lot of anti-India propaganda and influence operations. Of course, at any stage situation can go out of control due to any incident and result into an escalation. That is a different matter. In all cases we should not let our guard down but be fully prepared all along the LAC. Chinese are as untrustworthy as hell. And. Do not forget those weasels- the Pakistanis.

In one of my initial articles I had written that ‘That there are two likely outcomes. The standoff ends at a table and China withdraws to resume an unmanned LAC or we end up with a manned LAC’. Well. China is withdrawing beyond Finger 8 and we are moving to a semi manned LAC. Since those initial days I have steadfastly written in support of the Indian Armed forces. There were many within the Services who were incredulous at my thoughts. There have been many comments and responses to the effect that I am pro government, pro establishment, a hawk , pro ruling party and so on. I am none of these. Post retirement, I took up military analysis as a hobby. My hobby is an extension of lifelong service with the Indian Armed Forces (they continue to teach me), three decades of studying China and multiple postings/assignments along the LAC from the Karakoram Pass to Kibithu. I applied Sun Tzu’s teaching: “If you know the enemy and know yourself, you need not fear the result of a hundred battles. If you know yourself but not the enemy, for every victory gained you will also suffer a defeat. If you know neither the enemy nor yourself, you will succumb in every battle”. I then factored in the reality of the Himalayan Terrain. Ergo. The results were foregone long back. The Chinese never knew themselves nor their enemy and much less of the terrain. They have succumbed. If they come back to fight in a hurry they will succumb again. Sun Tzu will have to reincarnate and coin a saying – “Losing without Fighting” for PLA to adopt.