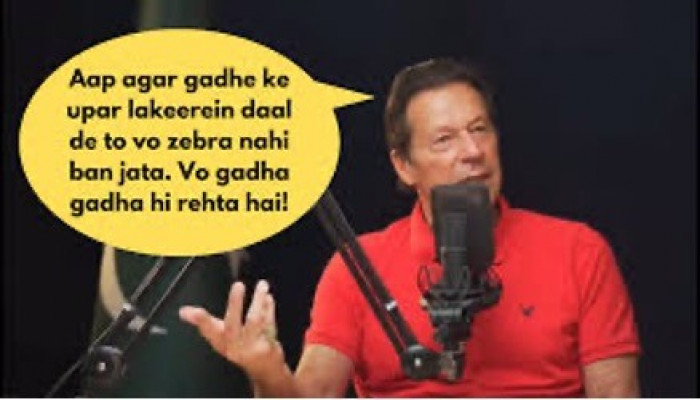 Pakistan the land of Shaheeds, Ghazis and Niazis was the ultimate geopolitical Zebra. Fast paced, agile and surefooted on the international stage. Always the audacious centrepiece. Weaving a web of deceit around its adversaries who were to made look like dumb donkeys. When Imran Khan remarked that ‘if you paint a donkey with stripes it does not become a zebra’ and ‘lighting is everything’, he was speaking an essential truth of Pakistan. The ‘Gyan’ is that how you see an animal or how it looks depends on the lighting. When seen from brighter shades of light, the animal resembles a Zebra. When seen from a darker shade of light it is a good old donkey. Whenever Pakistan made the move of a Zebra its fault lines were always visible like the stripes of the animal.  However, many times the perceptions also changed depending upon the lighting and the lens through which one saw Pakistan. The other day I read an article on Pakistan’s new fault lines. The article highlighted some serious stuff but it did not do justice to Pakistan’s real fault lines. It did make me think of the old fault lines which made Pakistan the geostrategic Zebra it thinks it is.

As the war against terror was receding, it saw an opportunity to put Taliban in power in Afghanistan. It ditched USA, its old benefactor and become the frontline state of the next superpower - China. Never missing a trick. However, the thing is that Pakistan’s frontline status has always been periodic and episodic. Its periods of being a frontline state are the whites of the Zebra which was punctuated by the dark stripes of dictatorship, breakup, political, religious and economic fault lines. When one looks at it over a time span it does seem that Pakistan is an International Zebra. Well, the fortunes of the Zebra have changed. Today it is no more a frontline state. Everyone knows that it is there. No one is interested in it. No one has missed Pakistan in the Ukraine war. If anything, Imran Khan’s trip to Russia at the commencement of the war has put Pakistan in the geostrategic doghouse. The fault lines which constitute its dark stripes are widening and the whites of the Zebra are disappearing.

Pakistan has always been besotted with endless political strife which has undermined democracy constantly.  However, the current degree of political and societal polarisation is unprecedented. The fact that the polarisation is based on increasing influence of radicalism is the new driver. In Pakistan, radicalism comes in many forms. The TTP variety believes in one kind and the TLP believes in another. Both are being courted by political parties for their purposes. This has generated societal divide and people have assumed radical positions which have led to a more than healthy disrespect of its institutions - judiciary, parliament, election commission, media et al.  These are being subverted at will by the new forces which are now gaining ascendancy. At the forefront of this change is Imran Khan’s party which has shattered most established norms. It is now challenging the holy grail of the state institutions – the Pakistani Army. This has rarely been witnessed before. The Zebra stripes are fast vanishing.

Over the past decade, militancy is on the upswing despite intermittent efforts to stamp it out.  Violence has increased in its tribal districts which are the hotbeds of militancy along with Khyber Pakhtunkhwa and Balochistan. The second coming of the Afghan Taliban has emboldened militants of all stripes that if an insurgent force can drive out a superpower then it can handle the weak Pakistan state machinery. Ever since Taliban has come to power, militancy has increased in Pakistan. Increasing radicalisation in Pakistan has contributed to the complexity of this problem. Security forces have been attacked repeatedly. The state writ has been challenged on the streets. However, the most unhappy are the Chinese who have had to endure three deadly attacks on their citizens in the past one year. Chinese confidence in Pakistan’s security ability to protect their citizens and CPEC projects is shaken. When seen in the context of what is happening in Sri Lanka, China will soon start having second thoughts on Pakistan. This has serious ramifications. Overall, the sharp rise in militancy is a broadening dark stripe which is obliterating the Zebra whites!

Economic problems have been endemic in Pakistani history. However, the current crisis is unprecedented. There is a crisis of currency, debt and disruption of capital inflows from external sources. All this is getting compounded by the day due to global inflationary trends, a resultant of the Ukraine War. While Pakistan is pretty used to such crises, this time it is different. Its traditional benefactors are not stepping up to bail it out.

Pakistan’s geostrategic value has fallen. The severity and magnitude of the current crisis is reflected in the Chinese run power plants which are threatening to pull out due to unpaid bills. All CPEC road projects are stuck as also the hydel projects.  It will take a long-time for the country to recover. Recovery is feasible only if there is political stability, which seems far away. Take another perspective.

Traditionally, Pakistan has been a nation which exports wheat. For the past three years it has had to import wheat to meet its domestic requirements. Currently there is a significant shortfall in domestic output shortfall due to a poor harvest. The Ukraine war has resulted in tight external availability. The domestic demand for wheat has grown since there is a substantial leak into Afghanistan.  If Pakistan was seen as the donkey which carried the NATO burden, it is today the donkey which is constantly carrying the burden of Taliban ruled Afghanistan. To make matters worse, Pakistan does not have currency reserves to buy wheat at elevated prices. The economy at large, and food insecurity in particular is worsening only to make the zebra whites invisible.

The Pakistani Army was its ace of spades. The best Army never to have won a war, finally exulted in the US defeat it engineered in Afghanistan. Ever since then, things have gone southwards. More than being prepared for a conflict externally, the Army is grappling with internal divisions. In the past few months, it has repeatedly taken a "strong exception" to "intensified and deliberate attempts" to drag its name into the country's ongoing political discourse by "some political leaders, journalists and analysts". Its hand in national politics is not new. The multiple dictatorships have never left a doubt about the political roots of the Army.

In its latest avatar it had brought Imran Khan into power. It was the force behind the hybrid experiment in which it did the backseat driving. That has back fired.  However, it has resulted in politics within itself which is ‘new’. When Imran Khan keeps repeating in his rallies that ‘God hadn't permitted human beings to remain neutral when the time comes to stand up for justice and support the good’, he is taking a pot-shot directly at the Army. It is a ‘new’ phenomenon. When senior retired officers take position for one party or the other it is another ‘new’. When Maryam Nawaz, criticises the former ISI chief it is yet another ‘new’. Overall, the Pakistan Army which once signified the Zebra gait of the nation is resembling the beleaguered walk of an overburdened donkey.

In Dec 2019, I had written in an article that Pakistan has ceased to be on the frontline. It is the battle ground now! It was apparent even then that Pakistan will be the battle ground for a geopolitical struggle between China and USA. That is playing out in almost every sphere of Pakistani life. It was quite evident that Pakistan was going to head into an internal power struggle. That is on full display under full floodlights on a daily basis for the past two months. Afterall, lighting is everything as per Imran Khan. The traditional physical battle grounds are continuing to devour Pakistan’s energy. The bad lands alongside Afghanistan which house the religious seminaries are still spewing out radical apprentices for terrorism. Terrorism is on the rise along the Durand Line. The fact that resource deficiency would be Pakistani scourge was never new. It was only a matter of time before Pakistan would be struggling to make ends meet. The debilitation of the state has happened faster than expected. The Zebra is vanishing.

Imran Khan heralded Naya Pakistan when he came into power. Bhutto has now promised Purana Pakistan recently. The difference between Naya and Purana Pakistan should have been the black and white stripes of the Pakistani Zebra. However, compare it on any metric. There is hardly any difference between Naya and Purana Pakistan. Both are pitch black like the darkness of the endemic power shortages in Pakistan with no shade of white or grey. Slowly but steadily, the Zebra stripes of Pakistan are disappearing into an expanding blackness. As the blackness increases one should start seeing the donkey crisscrossed with ever widening fault-lines. You see, lighting is everything!