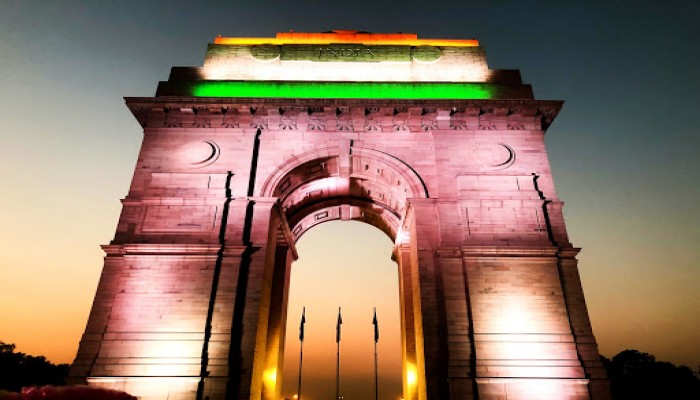 Ancient India was a great power due to its immense knowledge, culture and fabled wealth. It was a nation of states and never a nation state as ‘India’ is today. The conglomeration of states collectively represented a significant portion of the world GDP (as seen in the chart below). Invaders came to conquer or sack it in parts. Many went back - enriched or bankrupt, dead or alive, sung or unsung. Many stayed back to establish famous dynasties. More must have perished in obscurity. European colonizers came and fought over it till the Britishers emerged victorious. British India was the ‘Jewel in the Crown’ of the United Kingdom, the greatest superpower the world has seen. The jewel was deemed to be as powerful as the crown. When the crown disintegrated, the jewel acquired grime and lost lustre.

On independence, a poverty-stricken India was an unnatural state.  It was expected to dissipate and disintegrate into a nation of states and descend into a ‘poor’ form of ancient India. The West created Pakistan in the hope of having a stable geostrategic wedge in the then foreseen kaleidoscopic disintegration. The bet on Pakistan failed. On the other hand, India is rising like a phoenix from the ashes.  More importantly, India has defied itself to survive and rise.  It survived the internal churn of caste, creed, race, religion, ethnicities, ideologies, identities, language, politics and all other myriad diversities which constitute India. It survived the threats, vagaries and ravages of weather, elements and gods. It survived onslaughts from a predatory China and a toxic Pakistan. It survived the dismissive disdain of a disparaging West. Slowly, steadily and surely it grew. It grew through famine, hunger, poverty alleviation, nonalignment, self- isolation, political upheavals and economic reform. Between the ebbs of a stagnant India and the flow of a progressive India, two institutions never let it down. The first was, is and always will be the common Indian – undaunted, steady, hardworking and hardy. Successful despite seemingly unsurmountable odds. The second was its Armed Forces – apolitical, tough and unyielding. Both are respected, in India and abroad, by all stretches of public and private imagination, without an iota of doubt.

As the Global order is changing, contemporary India is rising fast. By most estimates it will be an economic power of great consequence. The chart below foretells the future. Many more such predictive tarots are on the internet. All point to the inevitable rise.  1.3 billion people cannot be kept down forever. If one is to go by the oft quoted Clinton’s maxim – ‘it’s the economy stupid’, we are destined to be a great power. If one goes by Mao’s theory that power flows from the barrel of a gun, we should already be a great power with the kind of Armed Forces we have. Our potential was evident long ago when India was offered a ‘Veto’ seat in UN when it was formed. The nation was not confident enough to accept it then. Today when everything seems to be in place, we are being denied our rightful place in the comity of nations. It needs reflection and correction.

Great nations and empires follow a trajectory charted by a national power structure.  The power structure consists of an outer troika of military prowess, economic strength and diplomatic ability. This is held together by its political edifice which in turn is defined by people at the core. This is a universal immutable phenomenon which varies marginally with each nation. Whenever any component is in imbalance the trajectory of the nation wavers. Examine any great nation, empire, or superpower of the past and present.  These ingredients will be in harmonious balance. When the constituents are imbalanced, a nation rarely rises. Invariably it declines. Ancient China was great, but it was always squabbling within. It existed in a state of constant imbalance. It was never a superpower in the accepted sense as the Roman, Mongol or British Empires were or like USA is or USSR was. Napoleon, famously said – ‘let China sleep, when she wakes the world will tremble’. China has woken. Its people and political edifice have emerged stronger. It has risen to be an economic superpower, possesses diplomatic ability and is in the process of expanding its military prowess. When its military prowess comes into harmony with the rest of the power structure, the world will tremble at the arrival of a new superpower. The path is well laid out, but time for that is still ahead. However, China faces the danger of a demographic decline. Any contraction of the core will limit its superpower ability. Also, its politics, engenders a self-limiting coercive diplomacy. In the event, China might not make the world tremble as envisioned by Napoleon but will continue to trouble it till it reaches some equilibrium.

Examine USA in the same paradigm. For the best part of a century, it has been a superpower with all ingredients in balance. It is now experiencing a tremor, since its economic strength is contracting (relatively), to induce an imbalance. That is directly attributable to its extended commitment to all kinds of wars in the post-world war period.

USA might be reaching exhaustion by wars as postulated by Paul Kennedy in his classic – Rise and Fall of Great Powers. Its decline is paralleled previously by the Roman Empire which fell apart due to military overstretch and economic depredation. Unless USA reinvents itself economically, it’s decline will continue. On the other extreme, an examination of Pakistan is illuminative. Its oversized military overshadows the power structure to the extent that it not only forcibly squeezes the political edifice, but it also corners diplomatic ability and economic strength. As a result, an imbalanced Pakistan is destined to remain an ever-failing state well into the future.

Where does all this leave India? If an honest examination is done, India has been an internalizing reticent power. This is due to multiple factors. The reality of internal political compulsions is at odds with the demands of external geopolitics. They have rarely been in consonance with each other. The incongruence of professed nonalignment vs practiced opportunistic alignment has limited our outlook and options. Consequently, our political edifice has been shaky and amorphous; expanding in fits and starts. The pen of the bureaucrat and the tongue of the diplomat have largely conditioned our political edifice. This has adversely affected India’s military prowess and imbalanced the power structure. Every setback, of post-Independence India, reaffirms this story. In all Indian successes, a temporary semblance of balance emerges only to recess into traditional imbalance. Notwithstanding all this, the unstoppable growth of India has been powered by antlike industrious people. This will endure. As the core of the power structure expands unceasingly, the centrifugal push on the outer layers will increase.

If India continues to remain reticent, it will be denied its rightful place in the emerging global order by nations with more balanced power structures but not necessarily powerful like France, UK, Russia and others. The case of Japan merits examination in this context. It is the ideal example of an imbalanced reticent power, which voluntarily eschewed and limited growth of its military prowess. It attempted to gain balance by using the surrogate military prowess of USA through an alliance. That policy is coming unstuck since the arrangement with USA has neither guaranteed Japan, its territorial / maritime sovereignty or catapulted it to great power status of global consequence. Contemporary India is in the same boat in many respects but with a difference. On one hand it has a military, strong enough to ensure territorial integrity and sovereignty but is always hard pressed to guarantee or deliver it. On the other hand, the military prowess of India is good enough to defend the nation but is not good enough to catapult rising India to be a power of consequence. Some kind of a ‘Trishanku Swarg’ phenomenon.

An aspirational India is aware of its potential and seeks its place under the sun. It is shedding its inhibitions and charting a new course. ‘Atma Nirbharta’, ‘Vaccine Maitri’ ‘QUAD’ ‘Look East’ ‘Neighborhood First’ and so on are not catch phrases but harbingers of a changed vision. When the Prime Minister goes to the frontline at the height of a crisis and states that the age of expansionism is over or highlights the limitations of bureaucracy on the floor of the parliament, or talks of enhancing indigenisation in sourcing equipment and weapons, doctrines, procedures and customs practiced in the armed forces in a combined commanders conference, there is an emerging maturity in the political edifice. The political edifice is strengthening on its own and simultaneously attempting to drive the outer troika into balance.

India’s military prowess faces two challenges. The first is to grow indigenously to meet domestic and international strategic challenges as per an indigenous doctrine. That doctrine and accompanied capability has to be largely driven by the political edifice through clear cut guidance. The second challenge is co-option of the prowess into the larger power structure to make it effective. In order to overcome both these challenges, the requirement of a politico military connect is mandatory. If that does not come about, the military will flounder in inconsequence, divergent to the national vison. If this situation is allowed to continue, India will be forced to remain a reticent power. As simple as that. To remedy the situation, India has two options. Adopt the US model of politico-military connect through the democratically enacted Goldwater Nichols Act. Alternately morph into the PLA-CCP model. The choice is stark.

Chinese incursions being staved off after nine months of ‘hard ball’ comprehensive national response has infused strategic confidence in India. India’s handling of the Virus has changed global outlooks. When international institutions say that India will be the fastest growing economy in the foreseeable future, it represents something. When the military leads negotiations with China over the border dispute, it is a ‘first time’ paradigm. When the Prime Minister pens an op-ed in Washington Post along with leaders of three other powerful nations, it indicates that India is shedding reticence and seeking a new balance. The day balance of India’s power structure is on the horizon; on that day no power on earth can stop India or its destiny.

All the images are provided by the author. Title image courtesy: Indian Observer Post