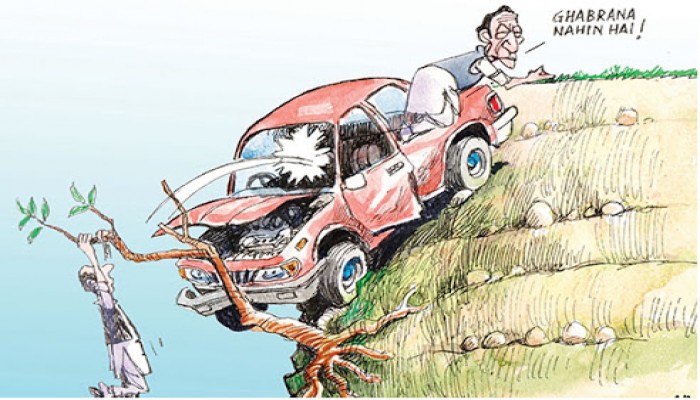 Sometime last year I stopped writing articles on Pakistan…it is so confusing… better to let Pakistanis speak about their plight…well… If I were a Pakistani, I would be wondering….no water, no food, no oil, no vaccines, no job, no security, … increasing debt, Chinese all around…this is a living hell... I want to leave the country…where do I go? .. no visas for the Gulf or Amrika…China a vigilante regime…Afghanistan…worse…Iran … all Shias…India? Is it time to get prepared?

Third Wave and Vaccines1:  In Pakistan, we have only had a ‘gift’ of a couple of million doses. It seems some purchase orders are in transit and under negotiation. But all told, these are still no more than a few million doses. Total administered doses are less than one million to date. And our population is some 220m. Even if we say that almost half of our citizens are young and consequently less vulnerable to the disease (though they can be carriers) that still leaves us with a population of some 100m people who need vaccinations. Where are we going to get vaccinations for all of these people? When are we going to get them? If we are going to progress at the rate at which we are currently, how much time will it take before we are able to bring the disruptions caused by COVID-19 under control?

Comment: Just imagine, the country is in steeeeeep debt, food security is poor, prices are spiiirrraaallling, no vaccines during a raging pandemic and what do these jarnails do?  They fire missiles and hold parades! This is like Marie Antoinette’s famous remark ‘let them eat cake’ or more appropriately like gabbar singh’s dialogue ‘ab goli kao’. If anyone should get booked for criminal negligence and tried for crimes against humanity it is these self-serving Pakistani generals. Who knows that might just happen to them one day….

Food Insecurity2: Life was not as hard two years ago as it is today for Tariq Mahmood, a 39-year-old taxi driver in Islamabad. He works seven days a week for 12 hours a day but rarely has more than a few hundred rupees left after feeding his family.

Mahmood said he has not felt this dejected by his dwindling finances in the past 14 years. For cab drivers like him the real culprit is not COVID-19, which shut down businesses, or the advent of ride-sharing services, which siphoned off customers, but spiralling food prices.

“I cannot afford the education of my child after paying for food for the family,” Mahmood told The Third Pole…. All my savings dried up during the lockdown and now I’m trapped under a mountain of debt,” he said.

Comment: This article is dated. I have reproduced it here to give an idea of the continuity of the problems in Pakistan. The average Pakistani is trapped in a mountain of personal debt besides the burden of state debt…what an Army! It has put the state and the individual in perpetual penury. Thank god I served in the Indian Army…we could ensure that Indians never had to suffer this fate… it is a different matter that the Government of India – past or present - chooses to gyp us from time to time and use the police against the veterans on Jantar Mantar. Chalega…desh toh mera hi hai.

Per Capita Debt in Pakistan3: The government has apprised the National Assembly that the per capita debt jumped to Rs 175,000 at the end of last fiscal year - an additional burden of Rs 54,901 or 46% on every citizen within two years.

In the Fiscal Policy Statement of 2020-21, the Ministry of Finance also admitted that the government violated the Fiscal Responsibility and Debt Limitation (FRDL) Act of 2005 by failing to reduce the federal fiscal deficit to 4% of the size of national economy.

The federal deficit stood at 8.6% of GDP - more than double the limit set by the law, it added.

Comment: Pity the Pakistani’s. Just extrapolate the increase. By next year this will jump to Rs 225,000 or more!

Institutions Role4: We are living in the age of institutionalisation where all development activities such as education, health, economics, shelter and food distribution for a society are handled by the institutions concerned. These institutions are formed through a structured system because an individual cannot carry out these functions alone……

The development of Pakistan rests on the strength of its institutions. If the institutions are strong, imbued with a sense of service and committed to carrying out their mandate, Pakistan’s position in the world as a nation would shine. It is therefore essential that we build and strengthen institutions that can lead us down the path of prosperity and development. Our past history of over 70 years has shown that one of Pakistan’s predicaments is weak institutions. We need to do something to address this.

Comment: Bhai Sahab! If your only functional institution is the Pakistan Army, how can you get development? Your development is at their cost! The rest of your institutions are defunct and deliberately kept so. The only thing Pakistan can do to address the situation is hang the Generals publically…… and then hope something better happens….

Comment: This is like saying aag aag aag in a fire fighting drill. Anyone in the mood for a roller coaster ride? Follow the prices of food in Pakistan. You will be thankful that you are in India.

No Trade with India5: The federal cabinet on Thursday deferred the Economic Coordination Committee's (ECC) decision to allow the import of sugar, cotton and cotton yarn from India through land and sea routes.

The decision has been deferred until India reinstates Article 370 of its Constitution, which guaranteed a semi-autonomous status for Indian-occupied Kashmir. Pakistan had suspended all bilateral trade with Indian following New Delhi's decision to revoke Article 370 in August 2019.

Comment: This is their idea of Burying the past. Ha ha. This is more like digging up the past to bury the future. For now, Pakistan will have to do with Cheeni Kam…though they will better off with the Cheeni Kam of the Han variety…

Daniel Pearl Case6: In a detailed verdict, the Supreme Court on Friday pointed a finger at the prosecution for its failure to prove guilt of the principal accused — Ahmed Omar Saeed Sheikh — in the murder of US journalist Daniel Pearl…. Besides, the evidence furnished during the trial was full of factual and legal defects, noted Justice Sardar Tariq Masood in the 43-page judgement he has authored…. Daniel Pearl, 38, was the South Asia bureau chief of The Wall Street Journal. Omar Sheikh was accused of abducting Mr Pearl in Karachi in Jan 2002 while he was conducting research on religious extremism. Later a graphic video showing his decapitation was delivered to the US Consulate after a month of his abduction. Subsequently, Omar Sheikh was arrested in 2002 and sentenced to death by the trial court.

Comment: It is a travesty of justice and that is an understatement. When you read between the lines, it is clear that the case was designed to fail. A similar thing will happen to Hafiz Sayeed and Azhar Masood if they are ever brought to trial…how can we bury the past Ms Imran and Bajwa when you keep digging up skeleton at regular intervals?

Pakistan Day Military Parade7:  The military parade in connection with Pakistan Day celebrations, previously postponed due to "inclement weather", was held in the capital on Thursday at Parade Ground near Shakarparian hills.

"We will defend our independence at all costs," he said. However, he added that Pakistan desired peace, security and development in the whole region and had taken practical steps in pursuit of this….."Pakistan wants to move forward with good intent and peace, but our desire for peace should not be construed as our weakness," he said.

President Alvi also paid tribute to the country's armed forces, stating that the entire country stood shoulder to shoulder with them in the face of foreign aggression and on national issues. "Our martyrs and our ghazis are our pride," he said.

"The entire nation stands by their Kashmiri brothers and sisters in this hour of trial." The president also urged the international community to take notice of the grim situation in the occupied valley.

Comment: Don’t miss the tone of the President’s remarks. This is the talk of a double-tongued snake called Pakistan. The merry men of Pakistan…the merry eleven-man of China and the merry Junta of Myanmar…all cut from the same mold…

Also, in February, the army had successfully conducted the ‘training launch’ of nuclear-capable ballistic mis­sile Ghaznavi as part of its annual field training exercise.

On January 20, a successful test of the surface-to-surface ballistic missile Shaheen-III was carried out.

Comment: When Rome was burning Nero was fiddling. When Pakistan is starving, the Generals are firing!