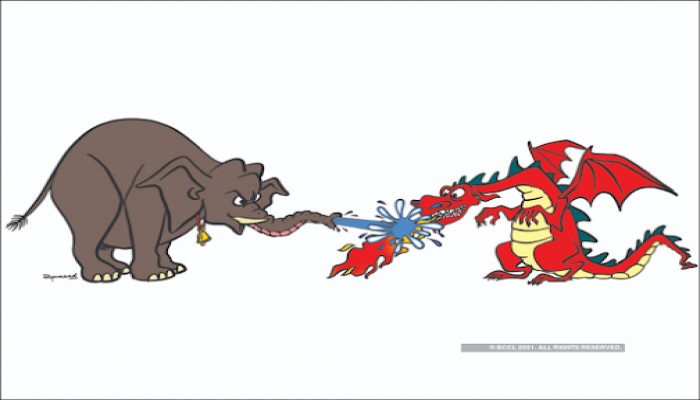 Rebalancing The news that 1 Corps is being restructured into a second mountain strike corps is really good.

It took China to actually do something to shake us out of our somnambulance to do what was apparent and required.  Sometimes it takes an external force to listen to internal reason. Newtons X law? In any case we are moving in the right direction. The main thing is that we are signalling an offensive intent to China at no extra cost. However, we must take it to its logical conclusion.

THIS IS AN OLD MAP AND DOES NOT REFLECT GROUNG REALITY. IT IS REPRESENTATIVE.

Changed Reality The raison d'etre for this rebalancing, is recognition of the fact that Pakistan is a receding threat and China is our main threat. The rebalancing is welcome. In its current form it is behind the curve.  There is more for consideration since the dynamics and realities have changed since the Chinese aggression in Eastern Ladakh. At that time, every media channel carried views of experts (ex-divisional, corps, and army commanders) explaining the manifestation of a collusive threat in Ladakh.  The new reality is that hereafter the threat will always be collusive. In my opinion, with the Sino-Pak deal inked on the Diamer- Basha Dam, the collusive threat will only escalate. I have analysed it in an earlier article - Water,Diamer Basha and Sino-Pak Collusion.  Increasingly, the scope for escalated armed conflict in the Sino-Pak-Indian context lies mostly in the unsettled borders of the LOC and LAC. Hence our requirement is really three mountain strike corps. Two oriented towards the LAC and one oriented towards the LOC. Hence detaching the Armoured Divisions to the Pivot Corps and converting the other two strike corps into dual tasked strike reserves will have to be done eventually. Contrary to popular thinking, a shift of this nature is dynamic and will enhance our strike capabilities against Pakistan and China at a minimal cost.

Force Multiplication In addition to the creation of a second mountain strike corps, we need to force multiply it with certain other actions. The good part is that it is within indigenous capability. However, one has to exhibit mental flexibility, think differently and grasp the moment. The remodelling of US marines is worth studying to draw lessons suiting our context. In my opinion, India must take the battle deep into Tibet with the Mountain Strike Corps next time China dares to do something. It should have the capability to interdict and inflict unacceptable damage to PLA communication arteries (Western and Eastern Highways), vulnerabilities (Chumbi Valley) and control large swathes of territory with fire (Depsang Plains and North Sikkim plains).  A terrain analysis of Tibet indicates that to effect deterrence, the business areas are between 40 to 250 km. The Chumbi Valley itself is 100 km (N-S) by 20-50 km (E-W).   We need to do the mental shift to implement  conventional deterrence methods – deterrence by denial or deterrence by punishment. It implies upgradation of Reach, Precision, Mobility and Battlefield Transparency. These interrelated entities are elucidated.

Reach Weapon systems which have the desired reach are either aircraft or missiles only. The issue with aircraft is that presently we do not have the numbers and will not have them for the next decade. Even if we had them, the fickle weather in the Himalayas might inhibit their employment. Hence, we need to bank on all weather ground-based missiles. A regression analysis indicates that we will need three types of missile systems which have ranges around 80-90km, 150 km and 300 km and beyond. These systems should be light enough to be taken to those places from where desired targets can be engaged. We have two systems which eminently suit the bill - Pinaka and Brahmos. We need a third, light and mobile system which has a range of about 150 km. For this, we have the technology and wherewithal but will have to put things in place. The day we can deploy these systems will be the day when abundant caution will be imposed on the Chinese. In my opinion we can deploy these systems in the same time frame as the strike corps gets rebalanced or even earlier.

Precision The adjunct to reach is precision. We must have the capability to inflict telling punishment at the places we are able to reach. The Pinaka and Brahmos have the capability of being precise to a very high degree even without terminal guidance.  The Pinaka system must be seen in this emerging paradigm. The unguided ammunition can carry out area destruction at tactical ranges. Though the unguided ammunition lacks pin point precision it is accurate enough. Its ability to operate single launchers in autonomous mode, multiple target capability, range of ammunition, lethality and spread contributes immensely in covering and controlling large areas by fire.

In my opinion this will be invaluable when vast areas like the Depsang Plains are to be addressed. With a range of up to 80 km the Guided Pinaka can carry out surgical tasks in the operational depth where PLA is vulnerable. The Brahmos is altogether a different class – near hypersonic and lethal. These systems with the combination of precision, reach and lethality will give a new meaning if employed effectively. Imagine conveying an assured heavy damage capability in the confined Chumbi Valley.

Here I would like to highlight a differential. Along the LAC, the terrain on the Chinese side is relatively flat and enables better targeting. On our side the terrain has steep slopes where a miss is as good as a mile. This differential will offset the advantage of numbers with PLA. The only hitch is that we do not have enough Pinakas at present. What is much worse is that we have reduced our numbers! I think India should review its decision and increase the number of Pinakas immediately. Otherwise, we will rue it one day as a nation.

Mobility Mobility in mountains is derived in three forms. First is the physical mobility which is being derived through our infrastructure development plans. Our development should enable us to deploy and re-deploy these systems where and when we want. It needs fine tuning.  The second is mobility provided by reach, precision and lethality of firepower. A mix of tube and rocket artillery will enable us to extend the battle field well into enemy depth seamlessly. However, the major issue which needs attention is mobility of destructive firepower afforded by armour.

We simply need a light-medium tank and that too in a hurry. In my opinion, we need an armoured brigade for each strike corps to have meaningful offensive capability and convey offensive intent. T90s used in Eastern Ladakh are only a stop gap defensive measure.  Either we go in for import from Russia (as usual) or look at a made in India option of converting the Vajra into a tank. We do not have a third realistic option. All issues put together I will opt for a Vajra based Made in India tank. The hull is proven, we have adequate technology and an indigenous production base. I have written about this in an article – Evolving into a Tank for High Altitudes.

Battle Field Transparency The biggest force multiplier is to know what is on the other side of the hill through battlefield transparency. We need good battle field transparency to gain intelligence and establish organic sensor to shooter linkages This is completely absent today. The first issue is to build good HUMINT.  We can do that with SFF and some imagination. Seeing is believing and the human element cannot be beaten. The next factor is to build battle field transparency through a network of surveillance and weapon location radars as also satellites. We have necessary capacity in this regard. The main issue is to have unmanned aerial surveillance capability. The present capability is not enough. We need indigenous UAVs with indigenous sensors. This is a sob story in India. The DRDO has not delivered.

Other sources are not being encouraged and we continue to be import reliant. There is adequate technical knowledge and capabilities in IITs and other start-ups. We need to start a line of UAVs of our own. These should include armed UAVs also. If we put together a program today, we will have a complete range in about a decade but results can show in a couple of years. Very importantly we also need to carry out a detailed target analysis and build target folders so that we are able to engage necessary targets effectively.

Special Forces and Infantry Our Special Forces are the best in business and vastly experienced. I am confident that if they are incorporated in this matrix, we will have out of proportion results. As far as the Infantry is concerned, they are the salt of my earth. They are our prime fighting element. We are overexposing them.

Artillery Division If all these missiles are being deployed, there will be a huge uptick in firepower. It is time that the Artillery Division is brought into play. In my reckoning the Artillery Division is to the mountains what the Armoured Division is to the plains. The integrative capability of the Arty Division HQ needs to be utilised. It is time Artillery is used as a deterrent factor and an enabler of the deep battle. It is also time to shed the age old and outdated concept that Artillery is meant for fire support only. The US Marines have shed their tanks completely and have scaled back their tube artillery. They are now migrating to a combination of long-range Missiles and unmanned systems. We need to take cues from them.  From what little one could make out of what the Chinese are doing, I can see that they are fully aping the USA.

Summary It is reiterated that the swing to rebalance to the North is welcome and timely. However, we need to force multiply the effort with additional armour and long-range missiles to take the battle deep into Tibet. We also need to improve our battle field transparency and enhance shooter to sensor linkages which are absent today. We need to go in for the integrative effect which an Artillery Division brings to table by shedding old ideas that Artillery is for fire support. All these suggestions which are being made are within currently available indigenous capability. Incidentally, the Chinese seem to have put these issues in place and are in the process of going to the next step of being networked to field more lethal systems.