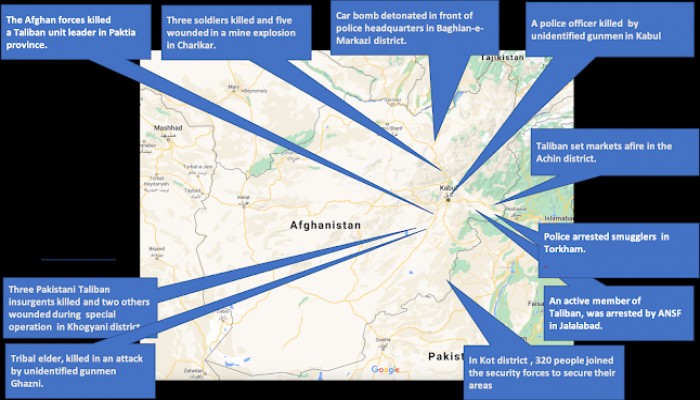 ‘Come September’ was a famous blockbuster tune of the 1960’s.

What will be the tune ‘Come September’ in Afghanistan?

On 01 Jun, some violent incidents occurred in Afghanistan (as marked on the map). Such violence routinely happens on any given day in the country. Give or take a few. Daily life in Afghanistan is hardly normal. Come September, the US troops will fly out of Afghanistan and leave it to its destiny. A new deck of cards will appear on the table. A new set of players in a new game. Everyone is cognizant of this and are preparing themselves for it. There is no one more aware of this than the Afghanis themselves.  With about two months left for the drawdown, the Taliban and the Afghan government, the main internal actors on stage, have started talks in Doha to reach an agreement. They might reach one for the present or not. However, given the fundamental differences in each other’s outlooks, any agreement will at best be fragile with a very high chance of failure. That is the international expectation anyway. If there is no agreement, it will be chaos and civil war. However, two issues would have changed. Firstly, USA will not be the focus of everyone’s attention. Secondly, each one will be on their own.

One has to go back in time to see what can happen ahead. As per a ‘Dawn’ editorial ‘A defeated Soviet Union cut and ran, while the Americans were also not keen to stick around for long after their ‘victory’. The result was an implosion in Afghanistan, the rise of the Afghan Taliban and the country becoming a hub for transnational militancy. The script may not be very different this time around’. In fact, the script is likely to be more complicated now. Internal degeneration is likely due to four competing interests.

The current Afghan Government and the Taliban will contest for power through all means. Presently, 50%   of Afghanistan is under government control, 30% under Taliban control and the remaining 20% is contested. They will continue in a state of tug of war in any agreement. The Islamic State is around and is expected to cast its shadow in the area.

The Islamic State is likely to gain strength from elements of both Taliban and the Government who are left unhappy with the peace outcomes. Also as per an UN report cited by CNN, ‘a significant part of the leadership of Al Qaeda are still believed to be in the Afghanistan/Pakistan border region...The belief is that Al-Qaeda remains firmly aligned with the Afghan Taliban and supports the Taliban strategy of securing a US withdrawal’. Add the Haqqani network, drug money, mining incomes and extortion. The cocktail is heady. The vacuum due to US withdrawal will be begging to be filled. Anarchy is on the cards. It will be fuelled by international players - regional and extra regional who are already waiting on the side-lines of the ‘graveyard of empires’.

Pakistan:  Pakistan shares the contentious ‘Durand Line’ with Afghanistan. Pashtuns on both sides have never respected it. Pakistan sought strategic depth in Afghanistan. It has had a deep hand in the current state of affairs. Pakistan actively ensured that USA does not succeed in Afghanistan. All this is well known and documented. That is in the past.

Today, an impoverished Pakistan cannot dictate terms but has high stakes in outcomes in Afghanistan. Its influence over either the Afghan government or present-day Taliban is tenuous at best. IS and Al-Qaeda in the region are problematic. As per Pakistan’s assessment, instability in Afghanistan means a fresh influx of refugees into Pakistan and the associated economic burden.  A civil war in Afghanistan is likely to regenerate violence and militancy along the Durand line (erstwhile FATA and Balochistan). Tehreek-i-Taliban Pakistan (TTP), which has shelter in Afghanistan is reviving. PTM will flourish.

Afghanistan will force Pakistan to shift focus and resources from Kashmir and India. That is unacceptable to the government and army, but unavoidable. Pakistan does not want to put its ‘boots on the ground’. It also does not want drone operations from its soil. However, the days of running with the hare and hunting with the hound are permanently over.

USA is seeking (forcing) a base in Pakistan to carry on with its air operations. That will have other ramifications and is problematic. Pakistan is midwifing China into Afghanistan as the main player. The acid test of Sino-Pak relations will now come. Who will put boots on the ground? Each is silently egging the other to do so.

In my assessment, Pakistan will face greater instability in the future and will be forced to look westwards. The beggared, nuclear, and failing power faces an existential challenge – not from India but Afghanistan. Pakistan will side with the Taliban in the eventuality of a civil war. That is a war it can’t afford.

China: The moment of reckoning for China – the super power, has arrived. Standard talk like ‘China is a supporter, mediator, and facilitator of the Afghan peace process…. China hopes to see Afghanistan rid itself of war, achieve peace, move toward stability, start reconstruction, and resume development’ is passe.  Till now China had the insurance of USA’s presence in Afghanistan. That will vanish in September. China has to protect its interests on its own. It wants to secure its borders and stop extremism spilling over into Xinjiang. It has invested $3 billion in a giant copper mine in Aynak and must secure it. It wants to extend the BRI to Afghanistan and further into Iran using its newfound equations with the latter.

China wants to dominate the regional scene. Spill over of extremism or terrorism from Afghanistan or Pakistan into Xinjiang will be the real problem.

CPEC and BRI will be threatened and China will be forced to look inwards. It cannot also allow vacuum to exist in Afghanistan. It has invested in the current Afghan Government and Taliban with a view to being the kingmaker in the long run. However, degeneration of the situation cannot be negated. The destabilising effect on Pakistan and CPEC is also a major issue. Its line that ‘it is in Pakistan’s interest to restore peace to Afghanistan at an early date’ indicates that China wants to outsource Afghanistan to Pakistan to put boots on ground!

However, China is also aware that it will have to do something itself. It has established  a military base 12-14 Km from the Tajik-Afghan border and 30 Km from the Tajik-China border in Gorno-Badakhshan province around 2019. It is in the process of constructing a road through the Wakhan Corridor. China is getting stretched and into centre stage wittingly or otherwise. India must leverage this emerging vulnerability to its advantage. Chinese commitment in Afghanistan is set to increase in unknown ways.

Iran: Iran is a complicated nation and its outlook on Afghanistan is difficult to fathom at present.  Till now, Iran’s actions were dictated by US presence. From here on, Iran might be looking to safeguard its interests in Afghanistan- trade and border stability. Iran will also attempt to influence outcomes in Afghanistan to strengthen its position in the Islamic world.

A Shia Iran, is likely to be at ideological odds with Sunni Taliban.  Al Qaeda has had some common ground with Iran. How all these equations will play out is to be seen. Iran’s role in any future Chinese military presence will be interesting.  All in all, Iran is the unknown factor. It can be taken for granted by anyone.

USA: USA is stepping out of the situation but will keep a gun still trained on Afghanistan. It will monitor the area so that no Afghan actor poses a threat to its homeland. It might leave behind a small force to oversee the emerging arrangement once it leaves. It will continue to influence events for some time. In case any regional actor steps out of line as per its estimate, USA will not hesitate to carry out drone/missile/air strikes. Without direct presence on ground and associated vulnerabilities, it will be free to use maximum force. It will force Pakistan to give it basing facilities. That way, it will throw a spanner in the Sino-Pak bonhomie also. It will endeavour to lead China up the garden path. It will seek basing facilities in one of the Central Asian Republics once again. Its naval presence will increase in the Gulf.

Russia: Russia wants to re-establish its global role. It also does not want terrorism to spread into its underbelly through Central Asia. Narcotic flow into Russia from Afghanistan is also an issue. Russia has already indicated that it will stay engaged in the situation through cooperation with Pakistan and India. Russia will continue to attempt to play the role of lead negotiator in the Post US withdrawal phase.

India:  The evolving situation needs clear understanding on India’s part. India’s historical links with Afghanistan needs to be protected and utilised. India also needs to preserve its regional role and importance. India has to keep Pakistan focussed on Afghanistan. India must be wary of Chinese entry into the region in a hands-on role.

India must also be cognisant of the increasing Iran-China foot print in the region. The general impression is that, India is getting marginalised.  However, that is not so. It can team up with USA, its strategic partner, and ensure that interests inimical to both are scotched. There is a good reason to cooperate with USA and develop the airbase in Tajikistan into something more potent. That will be significant. India has a presence in Tajikistan already.

We need to enlarge the Chabahar route in conjunction with Iran to increase trade with Afghanistan. India needs to re-energise its Northern alliance links before the situation deteriorates. India needs to support the current faction of the Afghan government in the new dispensation. It can play a part in conjunction with Russia. India must also reactivate its Pashtun links and support the oppressed in Baluchistan. India had many cards which it can play with and must not hesitate to do so.

India must be smart in this issue. The general impression that India does not have leverages is myopic. India has the capability of playing the enabler or spoiler in all scenarios. It must have a well thought out plan for the worst-case scenario. The Afghanistan scenario also gives India a chance to sort out some issues with China and Pakistan. It is an opportunity which we should utilise.