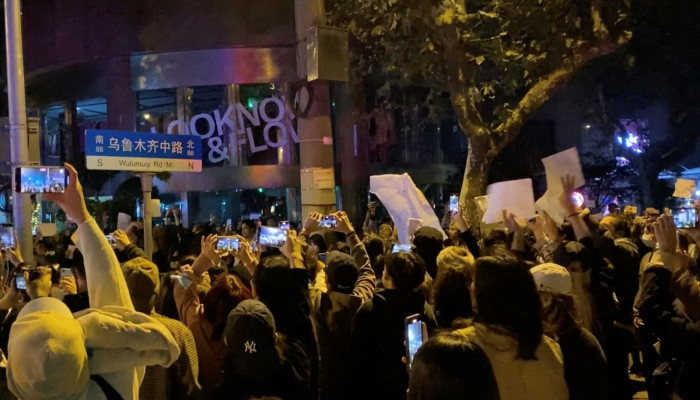 Stephen Roach’s recent article on Xi’s Obsession with Security quotes Paul Kennedy’s concept of ‘imperial overstretch’  in his classic book – The Rise and Fall of the Great Powers. Whether he has read the book or not, Xi the ‘Great Accelerator’ as he is known, must be worried. Is he accelerating China to its dream of rejuvenation and leading mankind to a common communist destiny or is he hastening the communist party to relinquish its monopoly on power? Let us not have a doubt. China is on the edge and Xi is in a bind.

Public demonstrations in China began in late 2021 in Xi’an, against zero-covid and spread to Shanghai during the lockdown.  Then came the great bank robbery in Jun-Aug when street protests erupted in Henan and people from all over refused to pay mortgages. The ‘bridge man’ appeared during the 20th Party Congress with his poster. Then came the violent protests by employees at the iPhone factory in Zhengzhou. This was followed by anti-zero covid eruptions all over China. While the focus is on widespread lockdowns, quarantines, mass testing and movement restrictions of Xi Jinping’s zero covid policy, this phenomenon is not a one-off Tiananmen Square event. Put all these together and the issue is much beyond that.

Zero-Covid is obviously a major factor in this game. Sometime in Jan 2022, Zhong Nanshan, China’s top respiratory disease expert, in an interview had said “ When other countries have been very well vaccinated, and China still lacks immunity, then that will be very dangerous.” At the end of 2022, China remains unvaccinated and people are in a dangerous situation. Cases are rising. There are gaps in vaccine coverage. The elderly are vulnerable. Chinese vaccines are ineffective.

A study by Shanghai’s Fudan University indicates that if China abandons its Zero Covid policy there could be up 1.6 million deaths. China’s limited hospital capacity could be overwhelmed soon. If China continues with zero covid, protests will snowball and overwhelm the security apparatus sooner or later. Even if nothing much happens as China exits zero covid, the recovery will be long since the virus will still be around.  China is in a perfect lose-lose situation.

From another perspective, Xi proclaimed victory over Covid in 2020. The supremacy of resolute communism saved lives when advanced democracies looked limp during the height of the pandemic. Chinese vaccines were touted to save the world. Sustaining the success of zero covid was reiterated in the 20th Party Congress.

Even now, Xi Jinping can fast track reopening China out of zero covid by importing vaccines. If he does that, it will be a ‘Victory into Defeat’ moment for him. That is impossible. There is more at stake. The social contract between the people and communists is to ensure prosperity to people and save them in return for their unquestioned loyalty and giving up freedoms.  The zero covid policy has put this under the hammer.

Since the turn of the century, the Chinese people enjoyed prosperity of a booming economy. However, the economy had started to slow down by 2018 even before Covid.  Xi Jinping had turned hard left by then. Zero Covid combined with Xi’s hard left evangelism, common prosperity, curbs on private sector (real estate, big tech and entertainment industry) have deepened the slow down.

Unprecedented floods hit China two years back. An unprecedented drought hit China in the same area this year. The dark clouds of climate are threateningly omni-potent. The overall result has been loss of jobs, pay cuts, youth unemployment, movement curbs, supply chain disruptions, factory closures, loss of homes and savings during the real estate crash, lack of educational facilities due to closure of big tech, lack of entertainment, lack of power, lack of water and so on.  The combined effect of all this has started to impact people’s lives. The social contract had started fraying.

Initially, zero covid was seen to be saving lives and had public support.  Soon it turned into a political tool to control movement and people’s lives. The dark side of control surfaced in the Shanghai lockdown and Henan bank protests. It got amplified in public perception in the Foxconn factory violence case and in the Urumqi fire. The zero covid policy was to save people. However, when people start dying or losing their life savings due to zero covid it became a major problem. While the immediate effect has been widespread protests, the long-term effect is beyond this. Where does it go from here?

A few things crystallised during the 20th Party Congress. Xi Jinping has been consistently stoking nationalism for quite some time. He has sold the ‘Chinese dream’, ‘revenge on the century of humiliation’ and ‘rejuvenation of the great Chinese nation’ and painted that China faces ‘unparalleled complexity, graveness, and difficulty’ when ‘navigating perilous, stormy seas’.

In the process, the emphasis shifted from economy, wealth and prosperity to security. As the emphasis shifted so did the resources. China has been profligate on expenditure on military, space and nuclear programs and less on the social sector. China’s advancement in technology has not made a difference to the man on the street who still does not have good vaccines or power to run his factories or seed technology to grow grain and ensure food security. In Chinese folklore, famine and hunger is a recurring foreboding event. Hence food security and grain technology are an important factor in the Chinese psyche. All this is not lost to the Chinese people.

Xi has taken China into a hole. The escape route is a return to a booming economy and ever-increasing prosperity. However, Xi Jinping has put his weight behind security and not on an unbridled economy. Further in his concept, economy must be state controlled with the private sector playing second fiddle. His master plan to rectify the economy is by dual circulation and common prosperity. It needs two factors to succeed. Consumption and exports.

A rapidly aging population and a stagnating economy will not contribute to either in the long run. Zero covid has complicated both in the short run in any case. From all indications the Chinese prescription for future growth is return to debt driven infrastructure (which China does not need) and costly investments at self-reliance.

Many are showcased as China claiming its rightful place in the world order. However, it will not address the people’s current problems – zero covid, pay cuts, joblessness and so on.  It will also not assist exports since Xi has soured relations with all his main customers – USA, UK, EU, Canada, India et al. In fact, his assertive policies and lofty ambitions of a Sino-centric world order have kick-started a trend of off-shoring / friend-shoring. As this gains pace, exports will be hit. Sequentially, consumption will also be affected.

All this must be seen through another prism also.  When Xi Jinping took over in 2012, corruption was rampant and inequality was widening. The communist party was losing control. He was not going to let China go the USSR way. In his view, Xi’s Mikhail Gorbachev’s, perestroika (restructuring) and glasnost (opening) reforms set the stage for the dissolution of the Soviet Union. There would be none of that for China. He took China back into the time when the leader and the party controlled the military, the security apparatus, propaganda, government data, ideology, and the economy.

Domestic control and geopolitical challenges assumed greater character than the economy and hi-tech was only a tool to achieve that. It is to note that Xi Jinping also had the strong economic base of being the global manufacturing hub which gave him the ‘powerful countermeasure’ of ‘international production chains’ and ‘dependence on China’.

In all this, one must note that Xi Jinping and his predecessors were keen to avoid the mistakes made by USSR. Yet they made their own. Deng instituted the disastrous one child policy. Xi Jinping’s obsession with control led him to Zero Covid and his assertive nationalistic attitude spooked the developed world. This was evident in the contrast between the 2008 Olympics and the 2022 Winter Olympics. The former was a coming out party for communist China and welcomed by all. The latter was full of artificial snow devoid of visitors.

Any analysis of China and Xi Jinping will inform us that the leader and his people are not on one page. The current protests in China will be muzzled off. An apparent calm will return. All these protesters will be termed as frustrated dissidents and dealt with accordingly. This process has started. The deeply entrenched communist party will not give up on power. However, the ground beneath their feet has shifted.  There are also clear indications that Xi Jinping does not have the tools to affect an economic recovery.

From many analyses, it is also clear that China will stagnate economically. Equally clear is that Xi Jinping will continue with his profligacy on security issues including advanced military, space and nuclear program consisting of hypersonic missiles, stealth aircraft, robotics et al backed by hi-tech systems like AI and Cyber which, while threatening to the world will only enhance his control over China. So, what are we getting to at the end of the day?

My mind goes back to the start of this article. In 2018, I had written in an article that China was an overstretched hegemon. The economic slowdown had begun, the debt bubble was expanding, and the CPEC/BRI was facing a pushback. At that time, itself, I felt Paul Kennedy was spot on. Accordingly, I had surmised, “…. empires rise for economic purposes using military means. As they rise, accumulation of power through geopolitical expansion acts as an aphrodisiac. Soon empires reach a point when their vastness requires an unproductive economic splurge to retain the strategic edge. Invariably it comes at the cost of turning off the capital from productive areas. They then collapse. Every colonial empire has recently followed this script”. Today’s China is on an imperial overstretch.

Will it collapse? It will not. A nation of 1.4 billion homogeneous and industrious people does not collapse. However, the events in China will change Xi and the CCP, who will prefer to be in the power of China which is not a superpower rather than being out of power in Superpower China.