Andhra Pradesh gave NDA a chance in 2014, Has NDA lived up to it? 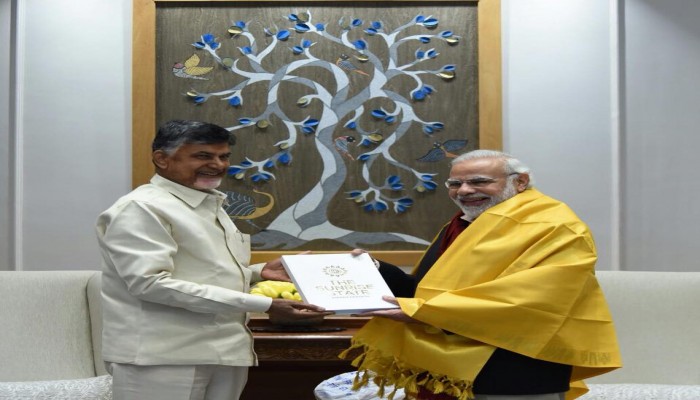 Recently, C-Voter in association with the Republic TV channel has published results of a survey. In this, they have predicted that if elections were to be held today, the NDA would return to power with 335 seats in the Lok Sabha!

What has caught my attention is the BJP’s loss/gain in the two southern states – Telangana and Andhra Pradesh. We will cover some details regarding Andhra Pradesh in this article, and Telangana in another.

C-Voter has predicted that of the 25 seats in Andhra Pradesh, the NDA will win 12 seats and the YSRCP will win 13 seats. This is a loss of 5 seats from 2014.

There have been many TV debates in the Telugu channels based on this survey, because this is the first time anyone has shown a lead to the opposition YSRCP. Almost every debate over the past 3.5 years have always focused on how close both YSRCP and TDP are always in terms of the vote share – and therefore very difficult to project the number of seats anyone would win. An assembly by-election recently and some local body elections have shown that TDP is still very much in control.

However, the survey results that indicate reduced numbers in the Lok Sabha seats is primarily because the people of Andhra Pradesh are angry with Modi’s government. But why are people so angry?

The hastened bifurcation process that the UPA Government completed in the fag-end of their tenure has left Andhra Pradesh in tatters. For any contentious thing, the only solution they gave was that it can be decided in the next 10 years (common capital, common entrance exams, common High Court etc).

Due to this hastened process, the people of Andhra Pradesh felt cheated, and to assuage their feelings, some key promises were made in the Act – studying the feasibility of establishing a new railway zone; Hyderabad as common capital for 10 years; establishing of national institutions (educational, health, industries); funding entirely the Polavaram irrigation project, etc.

But the biggest of all the demands was granting of a special category status. And this was not included in the Bill that was passed in the Lok Sabha. And since the support of BJP was required to pass this in the Rajya Sabha, the then Prime Minister, Manmohan Singh, made a statement on the floor of the house that the Central Government would grant this status.

Venkaiah Naidu had also vociferously argued that the status should be granted for 10 years and not five. Given the urgency with which the UPA was rushing through the Act, it didn’t want to go to the Lok Sabha again. The BJP also agreed to this compromise of not including this in the act, but taking the Prime Minister’s word at face value.

However, after coming to power, the NDA Government has shown a lot of reluctance in granting this status to Andhra Pradesh, while it has shown due diligence on various aspects of the bifurcation Act. This has become a rallying point for the opposition parties in the State, especially the badly damaged Congress!

This has cut very little ice with the people. All they want is – AP must be given special status because this was what was promised before the elections. Any package under the guise of nomenclature is not acceptable. Frequent statements by bureaucrats saying that AP doesn’t need special status further angers the people of the state here (a recent statement by the NITI Aayog vice chairman has kicked up another storm!)

A new Railway zone to Vizag is another prominent demand, and is yet to be fulfilled. Congress promised only a feasibility study for a new zone. The people have assumed this means the BJP government will give a railway zone to AP. No one knows what the status of this feasibility study is. A railway zone brings along with a plethora of opportunities, and the central government has been woeful in its communication strategy regarding the same.

The Polavaram irrigation project is a lifeline to the state of AP. And as with any big project, is taking a very long time to build. The Centre has agreed to fund the project in its entirety, and in a unique decision, has also given the responsibility of constructing this to the State government itself. The targeted date for completion was 2018. Recently, the state government received a notice seeking the stoppage of tenders’ process because of some anomalies detected! All hell broke loose yet again – the Center is against AP; the Center doesn’t want the project to finish etc – all kinds of arguments flew around. It took multiple meetings between Nitin Gadkari and the state ministers, one meeting between Vice President Venkaiah Naidu and Nitin Gadkari; one meeting between Chandrababu Naidu and Nitin Gadkari, to remove this new hurdle!

The details of this or any such issue have become irrelevant. It really didn’t matter if the AP government was flouting any rule or not – all it mattered was that the Modi government stopped Polavaram project for nearly 50 days!

Venkaiah Naidu was seen as the only saving grace. He was seen as the man fighting for AP, and whatever is due to the state. His elevation to the Vice President of the country was also seen as a demotion through promotion by many in AP. People and media have criticized Modi for removing Venkaiah from a position of power! We have elaborated more on this argument, in an earlier article on MyInd Makers here.

The BJP is thus badly losing the perception battle in the state. In fact there is sympathy towards Chandrababu Naidu for waging a ‘losing battle’ with the Center. I believe the 12 seats projection by the C-Voter survey is primarily towards TDP. And I also believe that as of today, this will not translate into a defeat for the TDP in the assembly elections – because there BJP is a marginal player and only the TDP and YSRCP will fight it out (with film star Pawan Kalyan’s Jana Sena all set to play spoilsport in splitting up these votes).

Electorally, the southern states of Andhra Pradesh and Telangana hold out immense promise for BJP’s growth, provided they put in some dedicated efforts to remove these perceptions and revive their functioning. Amit Shah and Narendra Modi need no lessons on electoral management, but if they want their party to grow like it did in Karnataka, what is currently being done by their state units is certainly not enough.

Note: The Telangana piece will be up tomorrow.