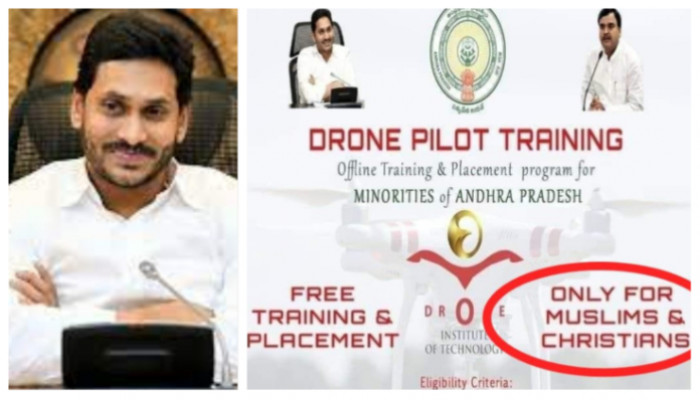 Vishnu Vardhan Reddy, the BJP general secretary of Andhra Pradesh has taken to Twitter to bring this to notice that how the YS Jagan Mohan Reddy government, has allegedly launched a drone pilot training program, only for candidates belonging to the two minority communities.

According to the poster shared by the BJP leader, the course is being offered by the Drone Institute of Technology (DIT) in Andhra Pradesh. The ad published inviting aspirants to join the offline course specifically mentions that the course will provide free training and placement only to Christian and Muslim candidates.

The BJP leader questioned Andhra CM YS Jagan Mohan Reddy’s anti-Hindu stance and tweeted, “Everyone has the equal rights on the resources then why @AndhraPradeshCM has specifically kept training only for students of 2 communities? It could lead to communal tensions; Andhra government is doing very dirty politics with our students. They should take back this decision.”

Notably, the opposition parties in Andhra Pradesh have always accused YS Jagan Reddy, a Christian, of spending huge on the services of the Christian community, with an eye on encouraging conversion activities, ever since he became the Chief Minister of Andhra.

Last year, the National Commission for Scheduled Castes (NCSC) issued a notice to the Chief Secretary of Andhra Pradesh seeking a report regarding the action taken against the forceful conversions targeting the Scheduled Caste (SC) community in the state.

NCSC had taken cognisance after, the Hindu legal-activist group – Legal Rights Protection Forum and SC-ST Rights Forum, a non-profit legal activism organisation that works for Dalit rights, had, in January 2020 written a letter to National Commission for Scheduled Castes (NCSC) over rampant forced conversions activities by the Christian missionaries and Church.

In 2019, the Jagan government had hiked the financial assistance, which was being given to Christian pilgrims going to Jerusalem, from Rs 40,000 to Rs 60,000 for those with an annual income up to Rs 3 lakh. The assistance money given to those who are earning over Rs 3 lakh per annum has been increased to Rs 30,000. In August 2019, Jagan’s government announced that they would provide an honorarium of Rs 5,000 per month to Christian pastors.