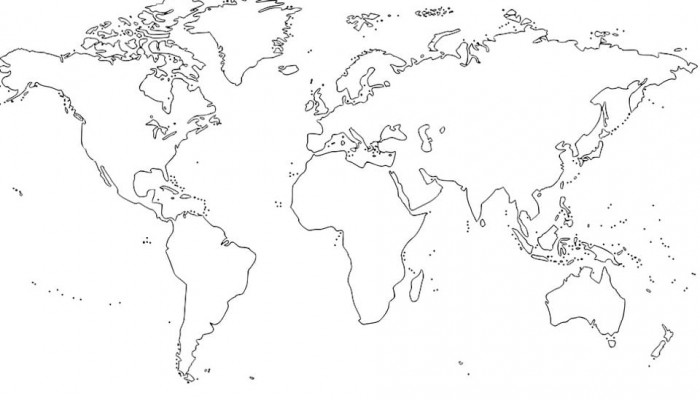 Instead of explaining why borders, let us logically speculate with historical examples as to what happens when borders are erased:

Firstly, borders are drawn by governments, therefore, erasing borders is same as erasing governments. Does that sound eerily familiar to you? Perhaps you are a Useful Idiot unaware of true Left, so to remind you, erasing governments is one of the penultimate goals of Communism as enshrined by Marx in the Communist Manifesto some 150yrs ago. Ergo, desire to erase borders is simply old wine in new bottle. The same Communist wine which - even as per grossly moderate estimates - killed 100 million (10 crore for desis) people world over; of which in China alone, Mao Zedong’s “Great Leap Forward” (an actual plan of his) led to a man-made famine in which as many as 45 million people perished - the single biggest episode of mass murder in all of world history (source - Mao’s Great Famine by Frank Dikötter). So, do we really want to be sipping on the same, time-tested, wine of genocidal Communism? (Spare us the answer if you are a Leftist)

Secondly, broadly speaking, the role of government (regular ones, not totalitarian Leftist governments) is:

Thus, in absence of borders i.e. government, who exactly will undertake these roles? Ghost of Christmas Future or Ghost of uncle Marx? (Do answer us if you are a Leftist)

Thirdly, some intelligent Leftist to counteract will argue that a singular government must be established for the entire Globe, the citizens of whom will be Global Citizens. However, these are not ‘intelligent’ Leftists, they are simply the regular elite ‘tyrannical’ Leftists - the type straight out of some Orwellian novel. You see attempts to establish a singular world government has motivated many tyrants such as Mao, Stalin and Hitler. They all promised their followers a peaceful united world under THEIR RULE AS PER THEIR DEFINITION.

Now what if others don’t see eye-to-eye with their ‘definition’ of good rule and/or don’t agree with submitting themselves to foreign governance preferring their local governance? Let us go to the newest entrant to the tyrant club from popular show Game of Thrones - Daenerys Targaryen; as she answers this question succinctly by exclaiming: “THEY DON'T GET TO CHOOSE.” (Sadly, at times fictional characters make better examples, for majority of the populace knows fiction better than history!) What must we do to such intelligent tyrants (Leftists in our case)? We must do what Jon Snow did to Daenerys - end her miserable life before she could make life miserable for all. (P.S. - Not asking for murder, simply hurling slippers at Global Citizen promoters are enough)

Fourthly, it will be a logistical, legal and administrative nightmare, when the world is united under a Global Government, even when it is magically established without bloody wars (YOU: “C’mon even the so called peaceful Leftists in Communist Manifesto wrote that a Global Government cannot be established without terrible war.” ME: “I Know! Just argument’s sake, stay with me.”). You see, man cannot function without governments. More distant a government, less responsive it is to the people's needs. That is why we have municipalities, states, and countries. We don’t need to complicate the matter further by adding one more layer on top: the so called Global government. Even among states of a country itself, there are oftentimes varying levels of legal and societal differences. Thus, there are not agreements even among the people of a country. How the people of the World will agree on tax rates, on welfare, on penal code, on moral code, etc.? To give some illustration: Mike and John want to marry; Abdul wants to behead both because his God tells him that homosexuals must be killed. Jane wants to sun-bath topless on the beach; Aslam has learnt that improperly dressed women are inviting molestation. French want to draw cartoons of Mohammed as they have done of Ganesh and Christ; Kareem wants to behead those who do so. How do the Leftists working for the Global Government plan to resolve these differences?

Fifthly, who will lead this so called Global Government? Has to be one person at top. Will Joseph from Arizona take to Rahul from Wayanad as his leader? Will Vlad from Siberia take to Kim from Korea as his leader? Will Itachi from Tokyo take to Ricardo from Rio as his leader? How can people relate to their All Supreme Leader if the leader doesn’t even share the same culture, history or language as them? Of course, people can be forced to accept and relate to one Supreme Leader so long as there is Totalitarian State to enforce it (which is why ALL Leftist governments inevitably lead to - Totalitarian State).

Sixthly, let us analyse historically what has been the case. Today’s 15 independent nations (one of which being World’s Largest) in past were united under the Soviet Union, which spanned across 11 time zones and covered 1/6th of the entire Earth. Citizens of the USSR were not Russian or Uzbeki or Ukranian or Tatars, they were all 1/6th of “Global Citizens.” Yet this “small scale” replica of Global Citizenry could not stand united as too many people of different ethnicities, backgrounds, cultures, languages were placed under a common rule where mostly the interested of the contributing regions were sacrificed for the interests of the collective. Resulting in widespread dissatisfaction amongst the citizens of those regions (ex. Estonia and Lithuania) who were small and/or economically weak. This model experiment at a mini Global Citizenship hardly lasted 70yrs, but of course, Leftists have not given up on the notion at all, and neither have the Useful Idiots - like my former self - who mindlessly echo the words of their Leftist overlords.

Now that you realize what a scam a World without Borders is, we must understand how it came to existence.

Reality is that the Leftists in power in Asia, Africa and South America have ravaged these areas of the world. The populations are demanding answers, "Where is the utopia you thugs promised?" So, the Leftists are telling them that actually the utopia they were building in Venezuela, West Bengal and Zimbabwe has been stolen by the Americans and Europeans (basically all Developed countries), and we will take you to those countries, so that you can enjoy it. Therefore, help us erase the borders. To those living in the Developed countries, Left sells its drugs by middlemen of: intelligentsia, ill-informed movie stars, Leftist and Neo-modernist college professors, Left-approved Music personalities and Bands, Leftist media houses, Urban Naxalites (for India) and basically any gullible idiot who happens to be famous.

This is the whole story. At every mound of their failure, the Leftist will simply point you to the distant horizon: “..the utopia is there, walk some more, give me some more power, you good proletariat!” The countries they seized have all collapsed in hunger, poverty, and lawlessness. So, the Leftists thugs have come up with their next FiveYear Plan, the next Grand Yojana”: Borderless World (slow clap).