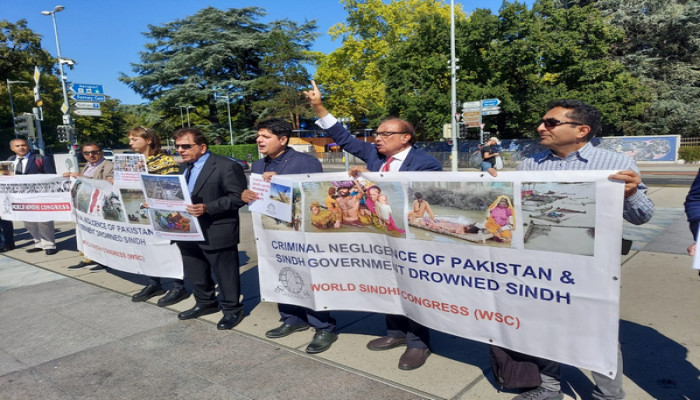 The World Sindhi Congress (WSC) held a large protest in front of the United Nations office in Geneva during the ongoing 51st session of the Human Rights Council on Thursday.

The protest was joined by the exile leaders of Balochistan and Pakistan Occupied Kashmir and human rights defenders from various countries of Europe, news agency ANI reported.

The speakers reiterated that Pakistan continues to commit heinous crimes against Sindhi, Baloch, Kashmiri and Pashtun people through enforced disappearances, extrajudicial killings, persecution of religious minorities, looting and occupation of their resources.

WSC representatives said Sindh is witnessing the worst devastation in its thousands of years’ history, impacting more than 20 million people, which has turned more than 10 million homeless.

Lakhu Luhana, Secretary General of World Sindhi Congress said, “The Pakistan government is saying it is a climate change. Yes, there is climate change but it’s not scientifically established that it was climate change. We have got more than enough evidence that they did it deliberately to drown Sindh and the Sindhi people”.

He added, “There are now millions impacted and millions who are homeless. Thousands of villagers have been displaced and it’s an active act of genocide, therefore, it is the duty of the international community to investigate the genocide of Sindhi people”.

Dr Hidayat Bhutto of WSC said, “Pakistan mismanagement and criminal negligence has drowned Sindh and they have blocked our natural flows of flood water and our rivers have been blocked. There is a climate element, but it’s a manmade disaster.”

A memorandum was presented to the UN Secretary-General requesting the UN and the International Community to set up a committee to investigate the floods and how to stop the genocide of Sindhi people using floods and support their relief and rehabilitation.

While Pakistan is spreading this narrative that it is caused by climate change, the evidence clearly suggests it was preventable, the continuing mismanagement of the water resources and ways and systematic criminal acts in the current catastrophe have resulted in this huge human tragedy.

Sindhi rights activists say that Pakistan is trying to use their tragedy to extort money from the world. They claim that the Pakistani government is completely out of providing meaningful help to millions of Sindhi people.