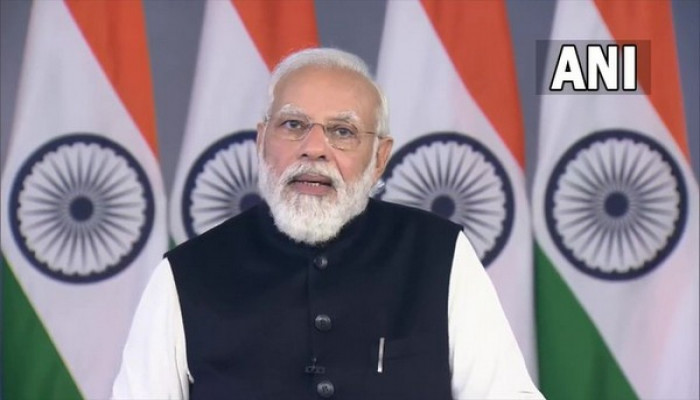 Prime Minister Narendra Modi on Monday addressed the World Economic Forum’s Davos Agenda via video conferencing. During his speech, he talked about some of the pressing issues like Covid-19, climate change, cryptocurrency, reforms and initiatives taken by his government for enhancing efficiency in business.

He started the speech by saying that India is moving forward with great strength and vigour. “We have recently completed the enormous task of administering 160 crore vaccine doses," he said.

During the address the PM proposed a 'P-3' approach which stands for "Pro Planet People".

"'Throw away' culture and consumerism has deepened the climate challenge. It is imperative to rapidly move from today's 'take-make-use-dispose' economy to a circular economy", he stressed.

"Today's "take-make-use-dispose", which in this economy, it is very important to rapidly move it towards a circular economy. This is the spirit at the core of the mission LIFE idea I discussed at COP26. LIFE - i.e. Lifestyle for Environment, the vision of such a Resilient and Sustainable Lifestyle which will be useful in dealing with Climate Crisis as well as future Unpredictable Challenge. Therefore, it is important for Mission LIFE to become a global mass movement. We can make a campaign of public participation like LIFE, P-3, and when I say P-3, also make a big basis for "Pro Planet People", said PM Modi.

The Prime Minister further emphasized that India is making policies, taking decisions regarding the present as well as the goals of the next 25 years, ANI reported.

"In this period, India has set the goals of high growth, a saturation of welfare and wellness. This period of growth will also be green, it will also be clean, it will also be sustainable, it will also be reliable. Continuing the tradition of making big commitments and living up to them for the global good, we have also set a target of net-zero by 2070," said PM Modi.

Reiterating India's commitment towards climate change, PM Modi said that with 17 per cent of the world's population, India contribute only 5 per cent to global carbon emissions and the commitment to tackle the climate challenge is 100 per cent.

"Initiatives like International Solar Alliance and Coalition for Disaster-Resilient Infrastructure for Climate Adaptation are proof of this. The result of the efforts of the past years is that today 40 per cent of our energy mix is coming from non-fossil sources. We have already achieved what India announced in Paris 9 years before the target," said the PM.