With one vituperative attack after another against PM Modi, a jittery opposition is showing signs of nervousness 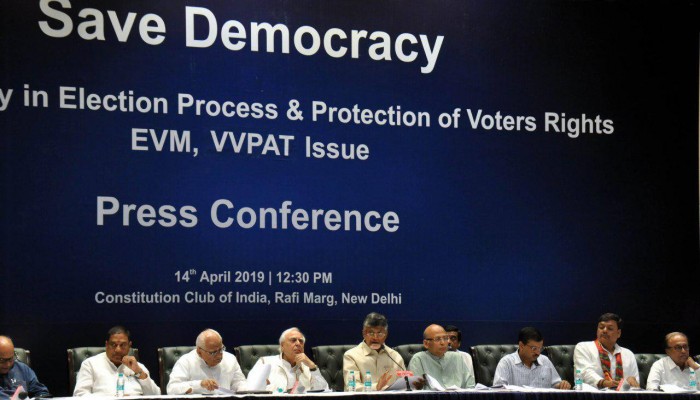 With one phase of elections still remaining and the other one in progress, news emerges that 21-opposition parties have intensified talks to form a coalition government. Major political parties of India, baring BJP and its allies are planning to meet on May 21st two days before the final electoral verdict to consolidate the plans of forming an “Anti-Modi” bloc as a last-ditch attempt to stop the Modi-Shah juggernaut. Even before commencement of elections, it was clear that Modi is fighting General Elections-2019 against no credible alternative. Now given, the quality of the political narrative it is amply clear that having failed in donning the role of responsible opposition, political parties have left the electorate of the country with no credible choice. In the absence of constructive debates resonating the aspiration of the youth, election battle has turned into an empty rhetorical war of narratives.

After the Supreme Court dismissed opposition’s plea to review the order on VVPAT counting, leaders of 21-parties are learnt to have closed ranks to form a united front. There has been a sudden spurt in the political activity with leaders of the regional parties Chandrababu Naidu of Telugu Desam Party (TDP) and K Chandra Sekhar Rao of Telangana Rashtra Samiti (TRS) taking the lead to create a cohesive coalition even before the D-Day of May 23rd. Responding to a question after the SC’s verdict on EVMs, Naidu reiterated that due to political compulsions, parties are forced to bury their differences. He hinted that there would be no third front or federal front but a united opposition or an anti-Modi front. NDTV reported that the opposition parties are planning to meet the President after May 19th to urge him not to call the single largest party for government formation if it fails to get absolute majority on its own. The opposition is readying letters of support to form an alternative government. Defending their move citing the developments in recent state assembly elections, opposition is preparing ground for keeping BJP out of the power. The desperation writ large on the faces of opposition leaders even before completion of poll process is palpable. With these elaborate plans and intense parleys, the opposition appears to be getting ready for an electoral drubbing.

Last year at the swearing in ceremony of Karnataka Chief Minister H D Kumaraswamy, marking the coming together of Congress and JD (S) in the state, opposition leaders put up a show of unity against the BJP. A galaxy of leaders stole the thunder of the occasion by embracing each other heralding the formation of a supposed “Mahaghatbandhan” to stall BJP’s electoral run. Leaders of the regional parties urged others to come together to form a united federal front. The inaugural united front included Congress and other regional parties. After parting ways with NDA, Naidu setting aside political animosities, joined hands with Congress and contested in the Telangana elections. While the “Mahakutami” or united coalition with regional parties performed abysmally, Congress managed to crack the electoral code in the assembly elections of Madhya Pradesh, Rajasthan and Chhattisgarh.

This positive outcome in the Hindi heartland injected fresh energy into the Congress cadres. But this has critically altered the electoral calculus between the opposition parties. Boosted by the major wins in the state elections Congress wanted to extract its pound of flesh and other parties refused to oblige. Indeed, by December last year, political pundits announced the resurgence of Congress. Surveys claimed that Congress popularity has reached its peak. Congress which is in the position of strength remained averse to any coalition. Even regional parties hardly reposed any faith the party led by the dynast Rahul Gandhi. Interestingly, while the political parties opposed BJP tooth and nail, multiple contenders for the Prime Ministerial position within the coalition emerged as the major bottle neck to churn out a workable coalition. Without losing much time, SP and BSP immediately clinched alliance in three states-Madhya Pradesh, Uttarakhand and Uttar Pradesh leaving Congress to fend for itself. Much touted opposition coalition almost crumbled.

By January, surveys soon ruled out possibility of BJP returning to power after it lost three assembly elections. Undeterred by the outcomes of the elections BJP began preparation for the upcoming general elections. NDA government rolled out a friendly budget, slashed GST on certain category of products, reservations to economically weaker sections, unveiled direct cash transfer to farmers through the Pradhan Mantri Kisan Samman Nidhi. Meanwhile, the benefits of universal health care, Ayushman Bhava project launched in October began to percolate to the lower rungs of the society. By raising the tax slab, NDA addressed the apathy of the middle-class. Unlike the state assemblies where poll plank is dominated by local issues and drive of local leadership, beneficiaries of NDA government’s initiatives strongly rallied behind Modi. Support for NDA has been intact. Surveys and analysts have indeed erred in extrapolating the results of assembly elections to national scenario. On the contrary, the much-hyped opposition unity began to wither. Regional parties and allies began to desert Congress led by Rahul Gandhi.

Eventually by February, opposition’s reluctance to name and shame Pakistan for the dastardly Pulwama attacks cast an indelible impression on the minds of the people. Notwithstanding, the international support for India’s right to self-defence after the Balakot strikes, opposition demanded proof of airstrikes by IAF. Also, an avalanche of attacks on the Prime Minister for escalating the tensions after the capture of Indian wing commander while outrightly endorsing the Pakistan’s devious approach has confounded the masses. Political animosities aside, Indians became wary of the leaderships which failed to express solidarity with the government in the hour of grave national threat. Though intellectuals would like to dissect Pulwama issue by reducing the endorsement of Balakot terror strikes as “ultimate patriotism test”. In simple terms, post-Pulwama episode is all about entire nation coming together and sending out a message to perpetrators of terror in unison. Clearly with a forthright approach towards terror and reiterating his commitment towards building a strong a stable India, Modi has unequivocally stated his position. With his decisive action and resilience in the face of external conflict Modi earned the confidence of people.  Opposition dithered and frittered an opportunity to assert their commitment towards nation.

In the run up to the elections, opposition parties irrespective of their ideologies forged coalitions of convenience. Staunch enemies turned into political allies overnight. None of these coalitions or political understandings bothered to evolve a common minimum program geared up for elections with a single point agenda of defeating Modi. For the three past decades, India had coalition governments. Electorate well-versed with compulsions of the coalition government and the prospect of instability always lurking in the corner have always been sceptical about these dubious political alliances. Besides, the absence of a putative Prime Ministerial candidate exacerbated worst fears about the performance, stability of this kind of khichdi sarkars.

Accentuating these apprehensions, the opposition instead of issue based political debates overpowered by a sense of entitlement and arrogance began to pass off-cuff remarks against the Prime Minister. People began to detest the opposition’s frivolous war of words and name calling which exposed their shallow political acumen. Even their election manifestos failed to chart out a vibrant vision for the nation. Opposition parties clamouring for power failed to come with constructive agenda for ushering the country into a new era. Even in the 21st century, the fourth-generation dynast of Congress party, underpinned his idea of India with special focus on “garibi hatao”, which has been its poll mantra since 1960s under the new name NYAY. The only aspect, where parties out competed each other is in doling out freebies and extending subsidies. In sharp contrast, BJP released a “Resolution document” (Sankalp Patra) which resonated with the aspirations of India’s new generation. The manifesto which enumerated 75 goals is applicable till 2022 which marks the 75 years of India’s independence. Outlining a clear frame work, BJP promised to lay a firm foundation for India’s development towards 2047, the centenary year of Independence.

At a time when India is starring at the two and half front battle and unabated terror attacks in Kashmir valley, Congress party the principal opposition undermined the national security. It promised to reduce deployment of forces in Kashmir valley AFSPA, repeal the sedition laws under the garb of right to dissent. As elections neared the political discourse touched new lows. Unrelenting mudslinging, hurling volley of abuses and wilful denigration have been the highlights of the election campaigning so far. Political narrative has plummeted to such a low level that President of Congress party, Rahul Gandhi was forced to tender an unconditional apology for misquoting the Supreme Court judgement and wilfully propagating lies after inviting the wrath of CJI in his third affidavit.

During various phases of elections, not even a single issue of national relevance was seriously debated. The entire election campaigning is replete of malicious personal attacks. Aside the contemptuous slanderous personal attacks against Modi, Mamata Banerjee by refusing to accept the constitutional position of Prime Minister displayed her visceral hatred towards Modi. By disapproving and insulting a democratically elected leader, Banerjee displayed her despotic tendencies. In line with his trend of malicious campaigning, Rahul Gandhi is an interview with India Today admitted that he wants to tarnish to image of Prime Minister. The unabated volley of abusive appellations against Prime Minister media by all and sundry is a testament to the defeatist attitude of the opposition. Instead of pulling up ruling dispensation for the unfulfilled promises if any and seeking account of the developmental work and benefits accrued to people during their tenure, opposition has resorted to the hostile name calling. In the process it has reduced the largest democratic exercise into a show of entitlement and arrogance.

While a supremely confident Modi and Amit Shah in their dozens of interviews confidently announced that NDA will come back to power with bigger mandate, opposition leaders are busy evolving alternate plans to stall the BJP by all means. If this is not desperation what is. Having exhausted every trick in the book, the opposition is resorting to lowly abusive attacks.