Why India is Right in Staying Away from RCEP - Chinaâs Geostrategic Tool? 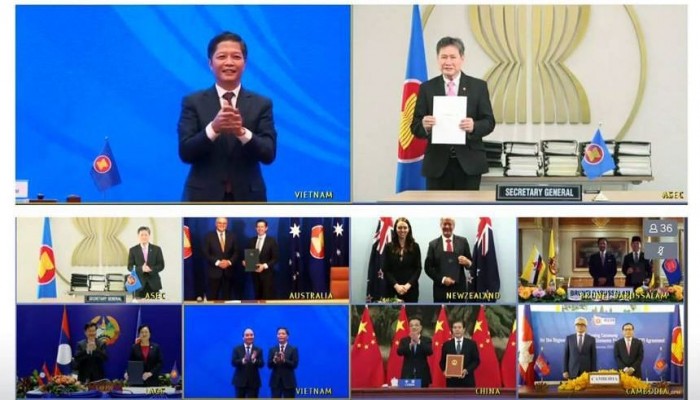 Timing of RCEP (Regional Comprehensive Economic Partnership) is salient. Just two days to the first anniversary of public knowledge of Wuhan virus outbreak and commencement of second phase of Quad Joint exercise in the Arabian Sea, 15 countries signed RCEP. At a time when the loosely woven Quad, a constellation of democracies is taking shape to emerge as counter weight to China in the Indo-Pacific, members of Quad, Japan and Australia have acceded to China-led and China-driven RCEP. The ambiguity of these and other Indo-Pacific nations is incomprehensible.

In response to Chinese aggressive expansionism, Trump administration has resurrected the Quad and even made FOIP, the major concept of its foreign policy. After 12 years, The Quadrilateral Malabar exercises, teeming solidarity and friendship began gaming exercises in the first week of November as a strategic message to China the region. Barely the message would have sunk into the CCP (Chinese Communist Party), RCEP saw light of the day.

China conceived RCEP in 2012, to counter growing influence of the US in the Asia-Pacific. After eight years of negotiations, on November 15th, 10 ASEAN Nations, China, South Korea, Japan, Australia and New Zealand have signed RCEP, the largest free trading arrangement. RCEP includes the second and third largest global economies, makes up for one third of global population and 30% of Global GDP. India has been initial negotiating partner of RCEP. But last year, India pulled out after RCEP failed to address its concerns.

Perturbed by the prospect of China writing trading rules for the Asia-Pacific, Obama envisaged Tran-Pacific Partnership (TPP) comprising of Australia, Brunei, Canada, Chile, Japan, Malaysia, Mexico, New Zealand, Peru, Singapore and Vietnam but excluded China. In 2017, Trump administration withdrew from TPP. After US exit, Japan took the lead and formed Comprehensive and Progressive Agreement for Trans Pacific Partnership (CPATPP). RCEP and CPATPP have seven common partners in the Asia-Pacific region. RCEP’s conclusion has given China a clear edge over the US in the region. Written with Chinese characters, RCEP unlike CPATPP doesn’t include any provisions for labour and environment.

Reeling under the impact of the Wuhan pandemic, nations vowed to decouple and restructure their trade supplies. Japan, Australia and India launched Resilient Supply Chain Initiative (RSCI) in September to build resilient supply chains. The moot point has been to diversify sourcing across various sectors to minimise risk from disruption and enhance resilience. Wuhan pandemic caused a disruption of global supplies sourced from China in the initial stages of the outbreak. While China quickly recovered and restored supplies, the impact has been felt across the globe. To avoid such recurrence in future steering an alternate course for new geostrategic realm, countries wanted to disengage and reposition supplies to countries which posed no security threats. The larger objective of RSCI has been to build multi-country initiative.

RSCI was spurred by strong security and political concerns as well. Wary of Chinese history of using trade as a strategic weapon, nations envisaged this new idea. The genesis of this proposal had its roots in the trade spats with Australia, contesting claims over Japan’s Senkaku island and the prolonged stand-off with India across the LAC. Coming in the wake of Japan offering subsidies to companies relocating from China to South East Asia, India and Bangladesh this proposal eventually shaped into an anti-China alliance symbolising emergence of an initiative along geopolitical lines. It also pointed to fashioning of new global economic order where strategic partnerships are fortified by robust economic diplomacy.

In the backdrop of such alternative grandiose plans, conclusion of China-driven RCEP has raised doubts over the strategic perspectives of the signatories. ASEAN countries have been circumspect of China’s ambitious hegemonic expansionism. Australia openly rebuked China’s coercive diplomacy and mercantilist approach. Japan is raising alarm over Chinese frequent incursions. Post-THAAD installation, China imposed trade sanctions on South Korea. New Zealand and Australia are intimidated by China’s growing influence in the Pacific Islands. Notwithstanding the growing disaffections, nations displayed no compunctions to align their economic fortunes with China.

A popular counter argument is now piquantly played in support of signatories- stung by recession, swayed by perception of lower tariffs of free trading regime like RCEP might fuel growth, countries have huddled to sign the agreement. But all of them clearly missed the forest for the woods. With India out of the deal, the gains are projected to be marginal. China is going to be the major beneficiary of RCEP.

For all the devastation inflicted by the China-originated Wuhan pandemic, countries are rewarding China by sourcing their supplies and allowing access to their markets. By signing RCEP countries undermined China’s hegemonistic behaviour and lent Beijing a strategic handle to mangle their economies. They inadvertently created a benign external environment which will act as driver for Chinese economy.

RCEP is China’s geostrategic tool. China has been stealthily expediting RCEP negotiations, to deepen its integration with Asian economy and to offset the damage suffered by the US trade war1. With India and the US, the two major balancing forces staying away from RCEP, Beijing is at the verge of evolving a China-centric Asian economic order. With India out of the picture, China will opportunistically reassert itself in the Asia-Pacific region, thwart the evolving Indo-Pacific fabric where India’s role as major regional power is acknowledged.

With concerns of a smooth transition of power in the US abound, roping in Japan and Australia, strong advocates of FOIP into RCEP, Beijing has consolidated its influence over the region. Trump for all his fallacies understood Chinese game plan and propped up the concept of Indo-Pacific, renamed US Pacific Command as Indo-Pacific Command as a strategic message to China. Went hammer and tongs after China over the mounting trade surplus.

President elect Joe Biden’s ambiguous messaging is a reprieve to China which is steadily cementing its position as a major economic and military superpower of the region. Lured by economic gains, nations let China scot free despite the havoc wrecked by China originated Wuhan pandemic. Economic gains apart, China duped nations and successfully regained dominance over the global supply chains.

Europe is slowly waking up to a reality of a 21st Century, dominated by Sino-centric Asia. Manfred Weber, leader of the European People’s Party, began advocating for a “new transatlantic agenda” and pronounced the need for an urgent re-unification of the Western World to battle China3.

India is privy to Beijing’s nefarious tactics since independence. Still New Delhi went out of way to accommodate Chinese interests and facilitated its global rise by openly pitching for its UNSC membership. In reciprocation, India was handed over the most humiliating defeat, years of creeping expansionist attempts and tumultuous encirclement.

China’s empty talk of “shared future” and tall claims of “win-win cooperation” through various flagship initiatives remain a myth. It is interesting that ASEAN, Japan, Australia, New Zealand which expressed concerns and raised alarm over the pursuits of the hegemon have given into the financial pressure.

By staying away from RCEP, India has made a point. The open-ended Indo-Sino logjam across the LAC, during the pandemic has irrevocably changed New Delhi’s approach towards China. Galwan clashes has hardened its stance. Reiterating, business can’t be as usual, India upped ante against China, banned popular gaming app PUBG mobile and 223 apps with Chinese links citing security reasons1 and began decoupling.

India owes its present geopolitical profile to a formidable growth trajectory in highly competitive sectors. There is a growing recognition that, “international relations have increasingly come to be shaped by economic relations”. In this context, New Delhi is facing strident criticism from certain quarters for staying away from RCEP, believed to trigger growth. Fears of India losing out of the economic race for failing to accede to RCEP are abound. Some critics even alluded to this move as India’s regression into a pre-1991 scenario.

Rebutting these concerns Foreign Minister Jaishankar said, “the recent debate on RCEP offers lessons in foreign policy as much as in trade domain. On the one hand, we should not go back to the old dogma of economic autarky and import substitution. But at the same time embracing the new dogma of globalisation without cost benefit analysis is equally dangerous…. We negotiated till the very end, as we should. Then knowing what was on offer, we took a call. And that call was that no agreement at this time was better than a bad agreement.”4

With regard to cost benefit analysis, Ministry of Finance report pointed that FTA with ASEAN countries has risen the trade deficits from $5 billion in 2010 to $22 billion. While India’s abysmally poor manufacturing is a major cause of concern, misuse of FTA route is found to be impacting the domestic industry and widening trade margins.

Certainly, India has to buckle up its manufacturing sector to stay competitive. Atma Nirbhar Bharat approach to enhance resilience of country has all the attributes to revive the economy. To plug the loopholes of FTA, India has notified Customs authority to stringently implement, “Rules of Origin Under FTA”5. It is anybody’s guess as which products are inundating Indian markets. Over the years India is paying hefty price for the non-reciprocal FTAs which exempt service sector.

It is common knowledge that China leveraged initiatives are devoid of “openness and efficiency”. Clarifying India’s stand, Jaishankar, stated that India is not averse to free trade pacts which are “fair and balanced” with EU as opposed to RCEP which would have “negative consequences”. FTA with EU is no cake walk. Given, EU’s growing scepticism and disenchantment with China, EU might be keen on exploring new alternatives to cement trade ties with India. Besides, India is also swiftly working towards conclusion of FTA with America.

Having ceded billions of dollars as trade deficit to China, India has learnt its lessons the hard way…. Currently, 20 negotiations for bilateral FTAs are underway. Clearly India is not ready to give into “agreements that are FTAs by stealth with China”. RCEP is clearly not the end of the road for India. RCEP will eventually take several months or years to come into effect. At least six ASEAN members and three non-ASEAN members should ratify for RCEP to kick in.