Why have the lies spread by Chandrababu Naidu gone unquestioned? Why are his false claims on Andhra Pradesh not being challenged? 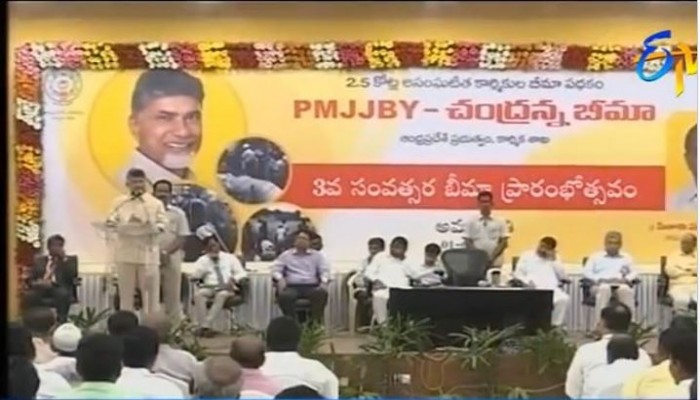 Ever since Chandrababu Naidu decided to move out of NDA, he has spent his every waking moment telling people that Prime Minister Modi has not given anything to AP. Even in an event where he was distributing cheques in the name of the Prime Minister, he took the mike and said despite Modi not giving anything, AP has progressed well. Don’t believe me? Look at the picture above:

The event is distribution of insurance cheques. The scheme, as you can clearly see in the background is PMJJBY-Chandranna Bheema! PMJJBY stands for Pradhan Mantri Jeevan Jyothi Bheema. This is a scheme initiated by Prime Minister Modi. Chandrababu Naidu added 2.25 lakhs to the 2.75 lakhs that the central government gives, and added his name also to the scheme. Hence, PMJJBY-Chandranna.

He stood on this stage and continuously berated Narendra Modi, that nothing was done for AP. And the heavily compliant media, could not even point out to the irony of doing this on stage for a scheme that the central government initiated!

I am not at all exaggerating when I say that CBN is spending his every waking moment with attacks on Prime Minister Modi. So, I went about digging out information on what is the truth. I have done a twitter thread on the same, and would like to use the same graphics and data in this article.

The Andhra Pradesh Reorganization Act 2014, mandates setting up of 11 educational institutes *before* 2022. Not only have the 11 been established/approved, an additional 5 institutes also have either been approved or established! 5 more than what has been mandated! Please note that this could have been done any time before the year 2022 – and yet we have to continuously hear the ranting of CBN.

The moment I put up the below graphic on twitter, I was bombarded with questions from TDP cadre on how much money has been allotted and in which campuses. I found the argument amusing. Except for a couple of institutes approved in 2018, every other institute mentioned is functional. Classes are ongoing in temporary campuses, until permanent campuses get ready. When will permanent campuses get ready?

Construction can start only after the state government hands over the land along with a fully constructed boundary wall. I had repeatedly sought official documents that can help add such information to the below table – when was the land with a boundary wall handed over to the central government? Needless to say, no answer yet!

The promise:  The AP Reorg Act mandates providing tax incentives to both Telangana and AP, “to promote industrialization and economic growth in both states”.

The status: On 30th September, 2016, the central government has notified that 7 out of the 13 districts can avail tax incentives. The tax incentives can be availed by any manufacturing unit that is setup anywhere from April 1st, 2015 to March 31st, 2020.

In addition to this, in the budget speech for the year 2017, Finance Minister Arun Jaitley has announced a special Capital Gain Tax exemption for all the 24,000 farmers who participated in the unique land pooling for Amaravati.

It’s important to check media reports from the day after, when TDP was ecstatic on hearing an announcement that they did not expect!

The promise: The central government shall support the development of backward areas, including expansion of social and physical infrastructure.

The current known status: The central government released a Rs. 1050 crores up until March 2017. The AP government spent only 950 crores up until January 2018. Instead of spending every waking moment berating the PM, perhaps CBN should have spent time in discussing how to utilize already available money!

The promise: The central government, shall examine the feasibility of expanding the existing Visakhapatnam, Vijayawada and Tirupati airports to international airports.

The current status: The Tirupati and Vijayawada airports have been declared International airports. Visakhapatnam was already an international airport, and since further expansion is not possible, a new greenfield airport has been sanctioned in Vijayanagaram (~100 kms from current site). In addition to this, 2 more new greenfield airports have been approved. The Kadapa airport has been included in the UDAN scheme, and the Rajamahendravaram airport would be expanded to have the largest runway in the state!

The promise: The central government shall examine feasibility of metro rail for Visakhapatnam and Vijayawada.

The current status: An in-principle approval was given to Vijayawada in 2014. However, there has been a change in the central policy in the year 2017, and a revised proposal is awaited. The Visakhapatnam metro is being planned in a unique PPP model (GO 378 of Municipal Administration and Urban Development, AP government) that was suggested by the central government.

The promise: The central government shall examine the feasibility of a Vizag-Chennai Industrial corridor (VCIC).

The current status: The VCIC is in various stages of planning and approvals currently. The Asian Development Bank has conceptualized the VCIC and has approved US $631 million so far!

The promise: The central government shall provide financial support for the creation of essential facilities in the new capital city of AP, including Raj Bhawan, High Court, Secretariat, Legislative Assembly, Council etc.

The current status: 1500 crores has been released for buildings in Amaravati. So far, only temporary constructions are in place. There is no clarity yet on finalized designs for many of the buildings mentioned above. In addition to the 1500 crores, 1000 crores has been released for the capital region in Vijayawada-Guntur. Chandrababu Naidu has admitted in the Assembly that they spent only 22% of these 1000 crores (as of June 2018).

Have all promises made in the AP Reorg Act been fulfilled then?

No, there are some still in limbo. An MOU for a petrochemical complex has been signed, but unfortunately is stuck in viability funding discussion. The feasibility study for a separate Railway zone for Vizag is still under examination. A new port was promised at Duggarajipatnam – however it has been found not feasible to have a new port so close to an existing Kakinada port. The state government has not come forward to suggest an alternate place for a port.

The state government has also been dilly dallying on providing necessary information for setting up of a steel plant in Kadapa. Instead, CBN as usual has accused the central government of not co-operating and went ahead to lay a foundation stone for the Kadapa Steel plant!

In addition to this, a whopping Rs 1,23,729.26 crores have been released to AP through various categories as envisaged by the 14th Finance Commission.

Friends, the sources for all my articles have been official documents – GOs issued by the AP government; Answers given in the Lok Sabha and Rajya Sabha; the AP Reorganization Act 2014 etc. The heavily compliant media in AP has corrupted the minds of crores of gullible citizens. The media has simply parroted the lies of Chandrababu Naidu, without a single fact check. Neither have they provided ample space for anyone who has attempted to even counter Chandrababu Naidu.

It is unfortunate that after so much work that has been done by the central government, it is Chandrababu Naidu who is gaining an upper hand in the perception battle. It is time to challenge these blatant lies, and question CBN as to why he is investing so much time in just berating the Prime Minister.