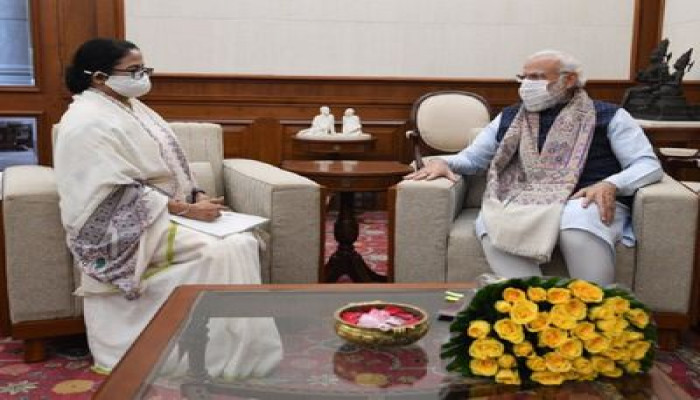 As a part of her three-day visit to Delhi, West Bengal Chief Minister Mamata Banerjee, on Wednesday said that she met Prime Minister Narendra Modi and demanded that the decision to extend BSF’s jurisdiction in the state be withdrawn. Besides the BSF extension, she raised several state-related issues, news agency PTI reported.

Banerjee also invited the Prime Minister to inaugurate Global Business Meet in West Bengal to be held next year.

The TMC chief also announced that she will be in Mumbai from November 30 to December 1 and will meet Maharashtra Chief Minister and Shiv Sena chief Uddhav Thackeray and NCP president Sharad Pawar during her visit.

She also raised concerns with the PM regarding the “widespread violence” in Tripura. TMC MPs have been staging protests against “attack on party workers” in Tripura as it heads towards the local body polls.

Talking about Bengal's BSF jurisdiction, the chief minister mentioned, "If BSF gets more power, it disturbs the law and order situation and one must know that law is a state subject."

"This is why, I requested the PM to discuss the issue and to make sure the federal structure isn’t unnecessarily disturbed."

Speaking about Trinamool Congress fighting from other states, Mamata said, "TMC will fight from where it is needed. If Akhilesh Yadav wants us to support them in Uttar Pradesh, we will."

Earlier in the day, Banerjee met BJP leader Subramanian Swamy. Following the meeting, Swamy laid speculations about him joining the Trinamool Congress to rest. “I was already with her (Mamata). There is no need for me to join the party,” he told reporters.