View from Ground Zero- In Tripura, BJP could spring a Surprise 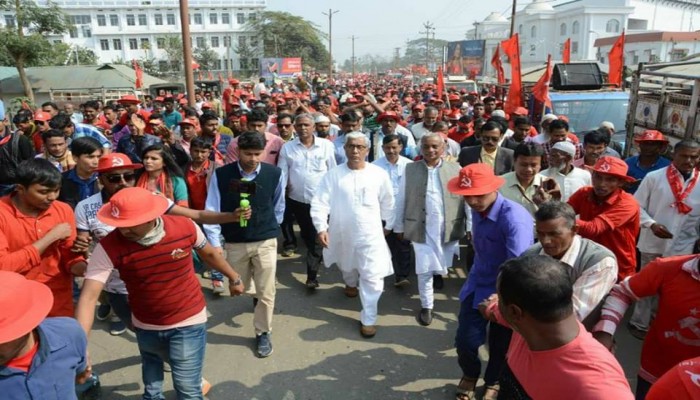 Elections in Tripura concluded on February 18.  BJP-IPFT Alliance is contesting the CPIM led government in a direct battle. The voting percentage was reported to be 78.53% till 9 pm. Congress, though contesting is not a serious electoral player, as it is appeared from:

A)    Absence of foot on ground

B) Lack of serious attention of party high command

C) Dilution of local unit post alliance with CPIM in West Bengal after 2013.

BJP which managed 34000 standalone votes, lost deposits in most of the seats contested in 2013 has emerged as the principal opposition post 2014.  BJP in Tripura has become the pillar around which anti left voters are consolidating. This makes Tripura an ideological battle exercised through elections and therefore is a unique battle.  Even though Tripura elections rarely capture imagination of Delhi based media, this election with its renewed energy and vigour has been consistently attracting headlines in media.  The opinionated media however waiting to take sides should keep the ground reports at the centre of their analysis.

The state with the population of 38 lacs, roughly 24 to 25 lakh voting population,  on an average 38000 voters per constituency and more than 90% voter turnout is witnessing a battle between two slogans - Tripura Trusts Modi -  ‘Chalo paltai’ and ‘Shanti Unnati Unnayan’.

‘Chalo paltai’ is a slogan coined by the BJP team reflecting an undercurrent against the current government of Manik Sarkar after 25 years of continuous rule. The slogan has resonated reasonably well with people which is evident from the historic response received from the people Prime Minister Narendra Modi’s rally in Agartala, North Tripura, and South Tripura on 15th and 08th February 2018 respectively received huge audience. It is one of the many firsts for the state to witness Prime Minister himself address large number of people on four occasions.

The slogan ‘Chalo Paltai’ also reflects a confidence in the path that the people of Tripura can take once they reject CPI (M) rule in the state, away from Red to Saffron. The popularity of the slogan on the ground is indicative of people yearning for a change. The state of Tripura has highest unemployment rate, has highest number of people below the poverty line, selective deprivation, denial of MGNREGA benefits, absence of industrial development, only 30 % people able to complete college, and 4th pay scale model commission for government employee, in short- a state where poverty is manufactured, deprivation is created to win votes”. The only saving grace was the clean image of the incumbent Chief Minister, Manik Sarkar and people’s confidence in his modest living, however post ‘rose valley scam’ his clean image has suffered a blot. A blot not necessarily on the Chief Minister’s image personally, but on the party at large

Tripura is full of anecdotes of pain of Berozgar, Bhatta and Bhedbhav. I remember meeting a young boy Shyan in Agartala who was regularly following my team’s election reportage. He met me and said, “Sir, should I ask you a question, please do not mind?” I responded in affirmation. He said, “Will the Government change this time? I hope it does. I work for 20 hours daily but still manage to earn 5000 rupees”. Syan’s story of grief echoes the sentiment of the youth in Tripura. I remember travelling to Khowai. Khowai is heart of CPI (M) movement in Tripura. Most of the political members of the party hail from this area of the state including Nripendra Chakravarty. The battleground of Khowai which was earlier considered to be a no-contest is being sought closely between BJP’s Amit Dixit and CPI (M)’s Nirmal Vishwas. CPI (M) is suffering an internal rift having denied ticket to popular candidate Vishvajeet Sharma. It is facing a resurgent BJP which is getting support from youth, women and local business community in Khowai. Amit Shah’s road show in Khowai has given momentum to the local unit of BJP in Khowai,

Business in Tripura works on “Cadre favouritism model”. People who do not support the ruling party do not receive support from the Government – no capital, no employees, no loan. Shantir Bazar, a constituency in south Tripura is one of many such constituencies with optimum business potential yet negligible job and business creation. Many native Bengalis have local Photo-shops, kirana shops despite being graduate and post graduate degree holders in this constituency. The state is known for rubber and bamboo plantation, however despite emphasis on declassifying bamboo as a forest produce, it has limited the economic benefit reaching the small and marginal farmer (though the current Union Budget has now declassified bamboo as a non-forest produce), and absence of rubber manufacturing and packaging industries does not complete the economic supply chain of farm to market.

The state despite deprivation in all areas has given repeated mandates to Manik Sarkar and the CPI(M) Government. The mandate has been for
A - Shanti – The Congress Government in 1990s reminded the state of violence and religious riots. The people in presence of no other alternative thought and believed peace as a better option.

B - Fear of exclusion – Since the anti-left opposition in Tripura was weak, virtually absent, dissenting voices had no pillar to gain strength and speak up. Any voice of dissent was crushed, excluded in welfare, and in some extreme cases even eliminated.

C – Tacit alliance with Congress at Centre – Congress Government at Centre worked in alliance with the CPI (M).     Congress gave Tripura no serious electoral thought and worked without any sincere electoral strategy.  Elections were tactical for the Congress, not strategic. It could never position itself as the centre-right or an anti-left party ideologically. The alliance partner CPI (M) Government governed the state surviving on increasing percentage of money from the centre, which continued even post 2014. Though post 2014, Centre was no more an ally of CPI (M), the BJP could position itself as the anti-left, centre right party.

Closer to election the alliance with IPFT give the BJP acess in tribal areas, It was a common saying in Tripura that CPI(M) fought any election as a plus 20 election, plus 20 reflected the 20 tribal seats  that CPI(M) always won convincingly. IPFT party representing the aspirations of tribals, with its aggression along with the support from the  BJP has made the election unique and an evenly fought matter in these 20 seats. IPFT’s aggression along with the support of the Center is giving karyakartas the confidence to fight the CPI (M) in its own backyard. The demand of independent Tripura-land has been rested and broader goal to defeat CPI (M) has taken priority. The demand of independent tribal land should not be viewed as a step to divide the state, but a genuine aspiration of tribals who are dependent on the land for economic activity. Addressing the aspiration for better economic living is the genesis of the demand.

The state has witnessed the voter turnout of more than 90% vote in successive elections but behind this number are also the stories of sharpest increase of 200% in polling post 2 pm, a non-transparent voter list,  and a ballot preferred over EVM. Tripura is also a rare state where  the  CEO  of election commission  resides in the same building as the Chief Minister’s Secretariat. However, the presence of sufficient number of CRPF and Central forces, a more active, aware, and concerned election commission should be enough to bury these aspersions of free and fair polling. Every serious political analyst, commentator and student of Indian politics should analyse results keeping these points in mind.