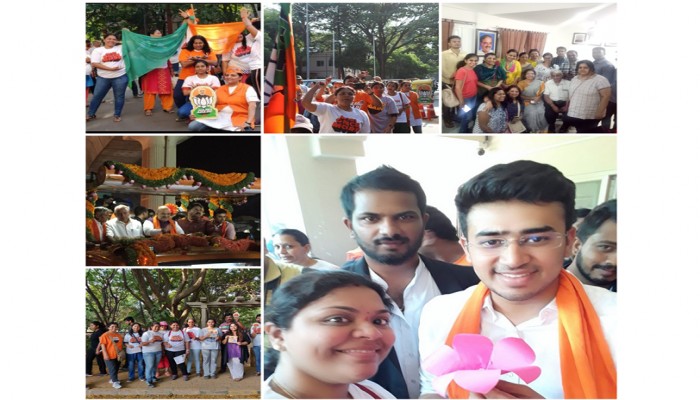 These slogans are still resonating in my mind!!!

Being a Kendriya Vidyalaya alumnus and a swayam sevika, my first-time campaigning experience was indeed a cherishable one

Be it wearing ‘MODI ONCE MORE’ t-shirts and doing Mall-o-thons or distributing pamphlets at Lalbagh and Cubbon Park!

From performing a flash mob at Jayanagar or door to door campaigning in Arekere!

This entire experience was just MAGICAL!!

This period provided me an opportunity to meet a few eminent leaders and many volunteers and mainly commoners like us.

I am so proud to be a South Bangalorean where people are almost wedded to Bharatiya Janata Party since decades.

While campaigning, few voters said they do not even need a pamphlet to vote for BJP, rather Modi ji, whereas few were finally happy to see BJP seeking votes and providing voter slips. In few areas we were welcomed with lime juice but in few other areas we were told not to enter as it belonged to another political party!

With the collaboration of multiple volunteer groups like Namo Bharti, TPC (Third Party Campaigning) of Sangh and volunteer Group of Team Tejasvi Surya, I am happy to say that we could achieve successful increase in voter turnout percentage in most of our booths.

Bengaluru has seen abnormal and unchecked growth in the past 3 decades owing to its popularity as the IT hub. People including our BJP candidate Tejasvi Surya are aware of these problems and have voiced their concern regularly. Some of the issues that need to be addressed immediately without any delay are listed below.

Job creation by industrial development in South Bengaluru: Bengaluru is known as the IT capital of the country. But not many are aware that many manufacturing units have shut down in the past 3 decades owing to multiple reasons. While IT can continue to be a major revenue earner for the state and the nation, the city can also afford to set up special industrial development zones in and around the Greater Bengaluru metropolitan area. Efforts in this regard will invite major foreign direct investment and also create large number of jobs in the blue-collared workforce sector.