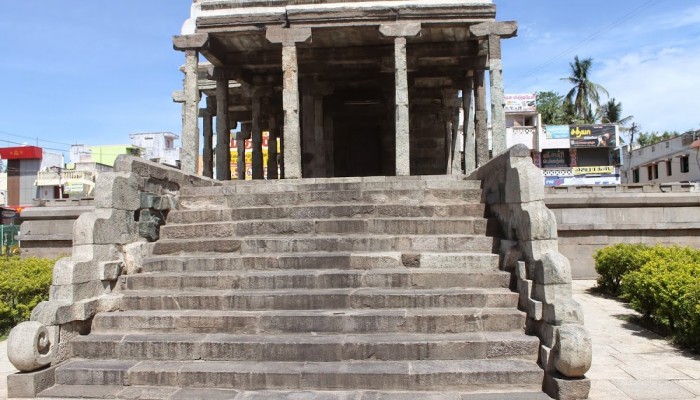 There is a small town in the state of Tamil Nadu called Uthiramerur. It is about 90 Kms from Chennai, not very far. In the past it was part of the Kanchipuram district but today it is part of Chengalpet district. The town should have been famous all over India, particularly so in the modern era, if not world famous. All concerned authorities are in absolute knowledge of its importance. Yet, it remains a nondescript town occupying an insignificant space in the tourism map of the state.

Uthiramerur has a small Vaikunta Perumal Temple. It is small by Tamil Nadu standards. However, it is really big from its historical, cultural and civilization importance stand-point. Its unassuming walls contain an inscription, recorded in the 10th Century AD. It holds an etched record of a very detailed Democratic Process of Governance. For academic purposes, you can call it Semi-Democratic yet even to a modern mind steeped in the sophistry of democracy it is stunning. Bharatamandala has a rich history of such democratic form-Janapadas go well into the BC era. But such a detailed record in writing does not exist. The Greek records of Athenian democracy are indeed detailed. But it is doubtful if the design, context, process everything is in one place recorded as in Uttiramerur, matching modern sophistication in articulation. It could be the world’s most ancient such record. This article will cover elements, essentials, insights and conclusions of the inscription. They deserve our deep reflection and contemplation. We have lost a lot; we must regain a lot.

Paranthaka Chola I was the Chola King in the early part of the 10th Century in Tamil Nadu. The Villagers of Uttiramerur decided to elect or realize a system to decide who their representatives were by themselves. They went to the King who granted their wish. The result was a system called Kuduvolai. Volai means a palm leaf both in Tamil and in some ways in other South Indian languages as well it means leaf. The name of a person was to be written on. Kudam means Pot, in which they put the leaf containing names of eligible candidates. Why is this such a big deal? Because, it is a stunningly detailed account semi-democratic process. Well, it is democratic in its essence and only semi-democratic in its process. It is a fascinatingly sophisticated design and thought process. The Inscription in its complete detail can be found in this link ifih.org/UttaramerurIns… . Renowned scholars, such as Sri. RA Nilakanta Shastri, Sri. S. Krishnaswami Iyengar and Dr. Nagaswamy, have studied it.

Look at the essential elements of the democratic process documented. It is difficult to not wonder at the sophistication of the design.

If one takes away the context, one could mistake this for a modern innovation. Bharatamandala had this in full measure in a village in the 10th Century AD, with an approval granted by Royal authority.

The inscription is written as 'We the Villagers', a sensibility that one would exclusively ascribe to the Modern era. A self-declaration with Royal authority is a metaphor for how the Bharateeya civilization evolved. Its bottom up in its innovation and top down in its authority. The scribe of the inscription (Kadadippottan Sivakkuri Rajamallamangalapriyan) is mentioned as well. That says so much about the importance given to inclusion in society. The King’s Officer is also mentioned - quite an egalitarian achievement that everybody gets mentioned in the same vein.

Let us look at the qualification of the candidates-

The design principle seems to be to keep those who have wronged away from Governance, as well as those near to them. The latter may protect the former with proximity to power. This is also a soft pressure on the community to reign their members from wrong doing. There is no persecution but the public space is beyond their reach. As a result, the damage is limited. Such a fascinating, sensible design could not have evolved in isolation. Many other records must have been lost otherwise; else one would have found in adjacent areas. Any system is the result of years of evolution within a community and its interaction with outside world. Hence, it is safe to assume that large parts of the Chola Kingdom must have had similar systems. Especially when the King himself accorded it a Royal Authority. We must wonder about that approach to Life, Philosophy and Concern in the society that shaped such a sophisticated design. That the King allowed it and did not think of it as an erosion of his authority - says so much about the Kingship that ancient India shaped. There is much out there in our past that we can be proud of in the Modern era.

Of course, it is important to not lose perspective. It is not a very strict democratic election process. Nomination of candidates was certainly democratic. But finally, it was a lottery-based selection - read the section on Electoral Process. The eldest in the community opens the Pot and the youngest person in the community is asked to choose a person from the nomination. This is more of a Selection. However, it worked well for a small community that knew each other. Further, an explicit one-vote-per-person may have created severe ill-will in the community. When democracy translates itself into a stretched process it tends to tear the fabric of the society. Often, there is intense animosity created between the victorious and the defeated. A lottery is a chance and reasons cannot be attributed to anybody. With governance alone being the overall objective, the Uthiramerur system may have realized a greater balance. If the democracy quotient had to be partially sacrificed, so be it. That people agreed for a system such as this proves that the design of the system in itself was democratic. Nevertheless, it is also important to note that there were many such Brahmana Sabhas and other communities in the Chola era. This means the larger governance had everybody participating in it. As an aside, Uthiramerur was a Brahamana Chaturvedi Mangalam settlement, largely SriVaishnavite. Around 25 important inscriptions are found in Uthiramerur.

In summary, this was semi-democratic, semi-lottery electoral system, definitely a written constitution. Its scope may be small being a village but the grand concern was a self-governance system. The functioning of each committee was quite detailed consisting of judicial, commercial, agriculture, irrigation and transportation functions. In addition, that concern to recall representatives is remarkable. That they designed an effective process with a set of conditions for the same is fascinating. The icing on the cake - every single person in the region had to be present during the elections. Only the sick were exempted. That demonstrates the intention to include the society in the process and conduct it as another dharmic ritual. Only such a ritual could make any social process an integral part of the community life. That alone resulted in a process playing a positive role in the community. This probably will be so in future too. Modernity is yet to achieve that for it reduces community into a set of individuals. It believes that great individual actions automatically result in a good community, but modernity is mistaken. In this semi-democratic election, every eligible candidate gets a reasonable opportunity of winning. Law of probability ensured everybody got an equal chance of running the office over a period of time. With the term being just one year nobody could dig in heels beyond a point and exploit the system. A simple system that everybody could understand, a sustainable system that the community could practise efficiently and a sufficiently democratic system that one provided equitable opportunity for all. A little democracy compromised at the process level resulted in a greater democracy on the ground because of the wisdom in the overall design. Quite a few people have written about the inscriptions, a lot of them are independent bloggers. This is one such blog with many photographs- https://know-your-heritage.blogspot.com/2014/07/uthiramerur-inscriptions-on-chola.html.

Outside the context of the Uthiramerur inscription, there are some important aspects of the Sabha System of the Chola era. It accepted endowments to run temples, gifts from Kings and kept very detailed records of the grants. It became a centre of village economy and village welfare. This model must be an inspiration for today’s governments to end temple control. They must let communities run them independently for the welfare of the society. It will significantly unburden govts of many daily affairs.

Interestingly, this temple is studied by every UPSC candidate as part of exam preparations. Wonder why curiosity does not go beyond. This is quite well known in the circles of authority. In the past - The Hindu, rediff.com have written about it. Dr. Nagasamy seems to have written a book but cannot find any more, Shri. S. Gurumurthy has written a detailed Twitter Thread on the inscription, the TN Govt is quite proud about it, former PM Shri. Rajiv Gandhi seems to have referred to it in 1984, Shri. TN Seshan seems to have referred to this at the time of his electoral reforms. The legend has it that he was reminded of it by the great Sri Sri Chandrashekharendra Saraswati Swamiji (the Kanchi Paramacharya). Travellers/TN pride folks have written immensely about it. A fine article on myindmakers on the democratic culture in India refers to Uthiramerur. Yet, it has not entered our textbooks yet.

Nevertheless, what Uthiramerur temple inscription clearly establishes is that

In summary, they could think through everything - a kind of 360 Degrees thinking. In some ways, we could hypothesize the philosophy of our tradition political system.

Fundamentally, a practical/balanced system, without an ideological overload in any aspect of the political design.

Looking at all this, one is forced to ask a few questions. Why is Uthiramerur

Irrespective of all this, let us tell this to our children. Let them keep the memory alive in the society until it gets into the formal institutions.