US Vice President refers to Pakistanâs role in terrorism 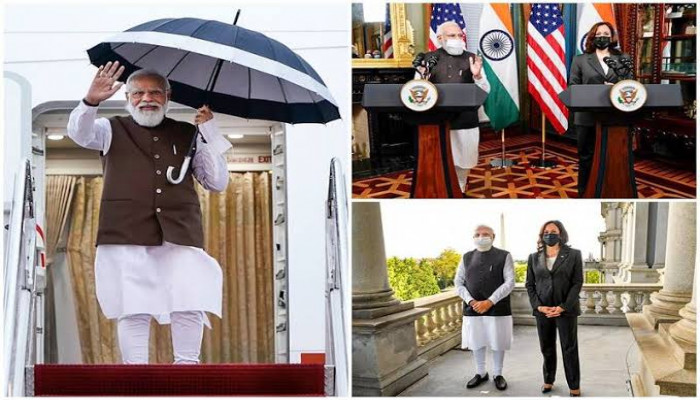 Addressing a press briefing, Foreign Secretary Harsh Vardhan Shringla said, “When the issue of terrorism came up, the Vice President suo motu referred to Pakistan's role in that regard."

“She asked Pakistan to take action so that this will not impact on US security and that of India. She agreed with the Prime Minister’s briefing on the fact of cross border terrorism and the fact that India has been a victim of terrorism for several decades now and on the need to rein in, and closely monitor Pakistan’s support for such terrorist groups”. Shringla said.

They not only discussed global issues of common interest, including threats to democracy, Afghanistan and the Indo-Pacific but they also decided to further cement the Indo-US strategic partnership.

"India and America are natural partners. We have similar values, similar geopolitical interests," Modi said in a joint media appearance with Harris.

Modi further added that both the countries share values and their coordination and cooperation is also gradually increasing.

Later in tweet, Modi said, "Glad to have met @VP@KamalaHarris. Her feat has inspired the entire world. We talked about multiple subjects that will further cement the India-USA friendship, which is based on shared values and cultural linkages."

In a statement, the Ministry of External Affairs said the two leaders discussed the COVID-19 situation in their countries, including ongoing efforts to contain the pandemic through expedited vaccination efforts, and ensuring supply of critical medicines, therapeutics and healthcare equipment.

Both sides acknowledged the importance of collaborative action on climate change. Prime Minister spoke about India’s push for increasing renewable energy and the recently launched National Hydrogen Mission. He also emphasized the importance of lifestyle changes to promote environmental sustainability, the statement said.

Both leaders acknowledged the vibrant people-to-people linkages as the bedrock of the mutually beneficial education linkages and the flow of knowledge, innovation and talent between our two countries.

They also discussed areas of future collaboration, including space cooperation, Information Technology, especially emerging and critical technologies, as well as the cooperation in healthcare sector.

Harris said the world is more interconnected and more interdependent than ever before. And the challenges that we face today have highlighted that fact. COVID-19, climate crisis and the importance of our shared belief in the Indo-Pacific region, she said.

Harris described India as a "very important partner" to the US and welcomed New Delhi's announcement that it will soon resume vaccine export.

"As democracies around the world are under threat, it is imperative that we defend democratic principles and institutions within our respective countries and around the world. And that we maintain what we must do to strengthen democracies at home and it is incumbent on our nations to of course protect democracies in the best interests of people of our countries”, she added further.

VP Kamala Harris pointed at the need to reign in and closely monitor Pakistan’s support for such terror groups, Shringla said.