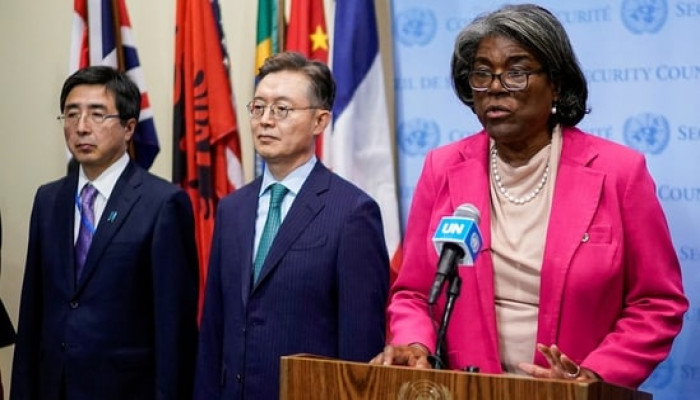 Without naming China and Russia, the United States on Wednesday accused "two permanent members" of the United Nations Security Council of enabling North Korea by protecting Pyongyang from attempts to strengthen UNSC sanctions imposed over its nuclear weapons and ballistic missile programs.

"The DPRK (North Korea) has enjoyed blanket protection from two members of this council," US Ambassador to the United Nations, Linda Thomas-Greenfield, said at the UN. "In short, two permanent members of the Security Council have enabled Kim Jong Un," she said.

The 15-member council met on Wednesday after North Korea test-fired a ballistic missile on Tuesday that soared over Japan for the first time in five years and prompted a warning for residents there to take cover, news agency ANI reported.

North Korea on Tuesday conducted its longest-ever weapons test, a nuclear-capable ballistic missile that flew over Japan, after which Tokyo urged residents to evacuate to shelters.

According to Kyodo News, early Tuesday, the government issued an alert urging residents in Japan's northernmost main island of Hokkaido and the country's northeastern prefecture of Aomori to stay inside buildings.

The White House said that both Biden and Kishida confirmed that they would continue to closely coordinate their immediate and longer-term response bilaterally, trilaterally with the Republic of Korea, and with the international community.

"They confirmed they would continue to closely coordinate their immediate and longer-term response bilaterally, trilaterally with the Republic of Korea, and with the international community. The leaders discussed the importance of immediate return and resolution of the cases of Japanese citizens abducted by the DPRK and resolved to continue every effort to limit the DPRK's ability to support its unlawful ballistic missile and weapons of mass destruction programs," the statement added.

Tuesday's missile launch was the first such missile launch, in years, prompting a warning for residents to take cover in northern Japan.

Last week, North Korea fired missiles in an apparent protest against joint naval drills involving the United States and South Korea. Under the Kim Jong-un regime, North Korea this year has tested a record number of missiles as it expands its weapons arsenal.