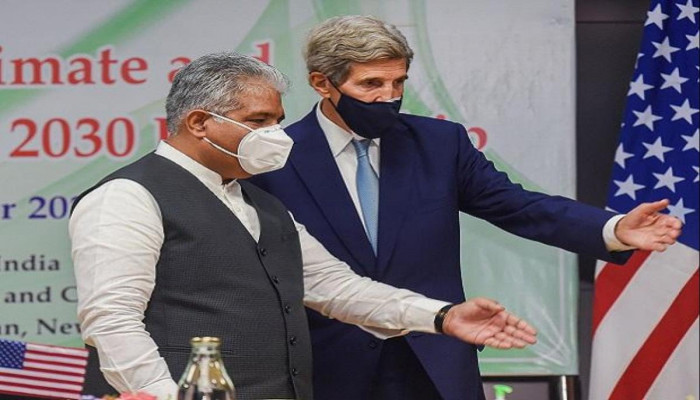 Kerry launched the 'Climate Action and Finance Mobilisation (CAFM) Dialogue' with the Indian government. He said the three-part focus of the dialogue would be finance mobilisation, clean energy development and climate adaptation measures.

Speaking at the event where he signed the CAFM Dialogue with Yadav, Kerry said a robust India-US Climate and Clean Energy Agenda 2030 Partnership would set an example for the world "on how swift climate action with inclusive and resilient economic development can bring the world closer to the climate goals and build stronger economies for both."

The Agenda-2030 partnership was launched at the April 2021 Leaders’ Summit on Climate between Prime Minister Narendra Modi and US President Jo Biden.

Kerry said Prime Minister Modi “has set a very ambitious targets in India. The target of 450 GW by 2030, of renewable energy, is one of the most powerful goals set in the world. You've already reached about 100 GW. I congratulate India for reaching that remarkable milestone.”

He said that India is a world leader in demonstrating that economic development and clean energy can go hand-in-hand.

“We're absolutely confident that the 450 Gigawatts as a goal can and will be reached and we look forward to partnering with India in the context of what we are talking about here today--in order to bring finance, bring technology and other elements to the table in order to achieve it,” he added.

He said India is a world leader in demonstrating that economic development and clean energy “isn't a zero-one sum choice, one or the other, you can do them both at same time”.

“I look forward to seeing this ambition hopefully given its proper due credit at COP 26 in Glasgow.”

He said the Climate Action and Finance Mobilisation Dialogue “will serve as a powerful avenue for US-India collaboration” and added that there will be three pillars to it.

“First, through the climate action pillar, we will develop proposals together that can contribute to curbing emissions in this crucial decade all across our economies.”

In the power sector, this would translate to a roadmap to achieve the 450 GW renewable energy target, at across transportation, buildings and industry. “It means charting pathways for a clean transition.”

The second point, was through the finance mobilisation pillar. “We will collaborate on attracting capital and enhancing the enabling environment to deploy 450 GW of renewable energy capacity and demonstrate and scale innovative clean energy technologies and promote bilateral clean energy investment and trade.”

“I’m very pleased that we have such robust participation from the Indian government in this launch of CAFMD,” he added.

The third pillar would be “adaptation and resilience”. “We are going to collaborate to build capacity to measure and manage climate risks in those other sectors of the economy. We are also going to be active on the protection of forests which is a major responsibility,” Kerry said.

He said PM Modi “has been a tremendous leader in this and we look forward to his visit to the US in a few days when we’ll have an opportunity to discuss this further,” referring to the Prime Minister’s proposed travel to the US, where is scheduled to address the UN General Assembly next week.

“There’s never been a better time to invest in the energy transition,” he said, adding that the International Energy Agency has forecast that if India seizes the clean energy opportunity "which it is, it could become the world’s largest market for batteries and solar panels.”

“There is a major opportunity for us to coordinate our two countries in a way that expands our bilateral investment and trade in clean energy products and services to both of our economic benefit. We need to develop, demonstrate and scale up emerging technologies that will be crucial for the net zero transition,” he added.

Earlier, the Environment Minister Bhupender Yadav, in his remarks, said that India is committed at the highest levels to combat climate change and also for meeting its commitment made to the international community.

He said the government is “addressing the climate change challenges through several key initiatives, working proactively in promoting low carbon and sustainable lifestyle, and our actions translate into India’s multiple policies and programmes aimed at synchronising development and climate change action at the national, state and local levels”.

He said, “the Indian economy is becoming greener through this conscious action and the effort to enhance energy efficiency through the economy, increase the share of renewably energy in the national mix and enhance forest and tree cover while simultaneously meeting India’s developmental challenge in a sustainable manner”.

Monday’s launch comes ahead of the UN Climate Change Conference in Glasgow, UK, -- COP 26 – which will take place from October 31 to November 12.

The US’s Special Presidential Envoy for Climate John Kerry arrived in India on Sunday for his two-day visit that aims to lay the groundwork for American efforts ahead of a key United Nations climate conference scheduled for November.

Kerry will meet with both ministers and officials in the Indian government, as well as private sector leaders to “discuss efforts to raise global climate ambition and speed India’s clean energy transition’’.

This will be his second visit to India as Biden's point-person on climate change, a priority area for the President.

On Monday afternoon, the former US secretary of state and Yadav launched the Climate Action and Finance Mobilization Dialogue (CAFMD), one of the two main tracks of the US-India Agenda 2030 Partnership that US President Joe Biden and Prime Minister Narendra Modi announced at the Leaders’ Summit on Climate in April.

Kerry is coming to India after failing to get any deals on climate change from China.

He met China's climate envoy Xie Zhenhua in Tianjin, away from the capital Beijing, but Foreign Minister Wang Yi spoke to him only by a video link.

Kerry visited India in April before the Climate Leaders’ Summit that Biden convened virtually to increase commitments to cutting greenhouse gas emissions and enhancing the use of clean energy.

The U.S. is pressuring India to set a net-zero emissions target that would require it to bring down its greenhouse gas emissions and to neutralize them with carbon and greenhouse gases being absorbed through more forests that absorb them or use new technologies to capture them.

The U.S. paints India as the world's third-biggest emitter of carbon dioxide, accounting for 7.17 percent of the world output. It ranks below the U.S., which puts out 27.92 percent of the global emissions, and China, which emits 14.5 percent.

But this hides the fact that an Indian's greenhouse gas emission is only 1.91 tons per year, compared to 15.52 by an American even as Biden and Kerry press other countries to cut their emission.