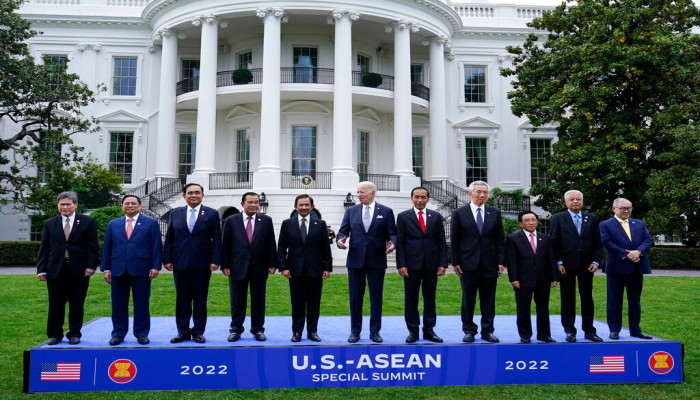 U.S. President Joe Biden welcomed leaders from the Association of Southeast Asian Nations (ASEAN) on Thursday at the White House for a two-day summit, as the Biden administration seeks to keep an eye on Asia while it supports Ukraine in its war with Russia.

The summit marks the first time ASEAN leaders have been invited to the White House in 45 years. The last time all the countries’ leaders visited the US was in 2016, when they met then-President Barack Obama at the Sunnylands ranch in California.

Despite strong Russia ties among many in the bloc, the two-day summit is expected to include a heavy focus on the war in Ukraine, as the White House seeks to encourage the Southeast Asian nations to join the international sanctions program or at least take a stronger rhetorical stance against Russia.

One of ASEAN’s 10 members, Myanmar, will not take part, as the group and the wider international community dither on how to prod the country’s military government back toward democracy following its Feb. 2021 coup.

Outgoing Philippine President Rodrigo Duterte will also be absent, in part because of the recent election of Ferdinand Marcos Jr. as well as his stated desire to avoid the United States “as a matter of principle.” The country will be represented by Foreign Secretary Teodoro Locsin Jr. at the summit.

ASEAN leaders have a packed schedule yesterday, beginning on Capitol Hill with House Speaker Nancy Pelosi followed by meetings with U.S. business leaders and trade officials before attending a dinner with Biden.

Today the leaders will spend time with U.S. Vice President Kamala Harris to discuss maritime cooperation and pandemic recovery before being joined by more Biden administration cabinet members to talk about climate change issues. Their day ends at the White House with Biden for a two-hour meeting.

A senior Biden administration official, speaking to reporters on Wednesday, said Biden would not single out any one leader for bilateral meetings but would have “a quick, private time” with each of them.

Biden’s challenge in reaffirming U.S. leadership in Southeast Asia hinges on Washington’s ability to provide meaningful economic engagement with ASEAN countries to offset China’s deep inroads into the region, particularly through its Belt and Road initiative.

U.S.-ASEAN relations are a key component of the Indo-Pacific strategy’s goal of reinforcing what Secretary of State Antony Blinken calls the “rules-based international order.”