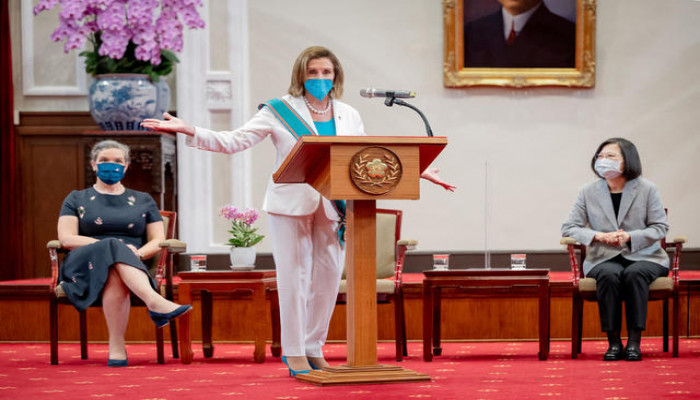 Aggressive posturing and brinkmanship are now threatening the stability of the Indo-Pacific region. Speaker of US House of Representatives Nancy Pelosi’s visit to Taiwan along with the Congressional delegation has turned into a watershed moment, triggering a diplomatic storm between the US and China. Pelosi embarked on a trip to East Asia - Singapore, Malaysia, South Korea and Japan and made an unconfirmed stop at Taiwan.

Stating that the Congressional delegation is travelling to the Indo-Pacific “to reaffirm America’s strong and unshakeable commitment to our allies and friends in the region”1, the statement by Pelosi deliberately avoided any mention of Taiwan.

Pelosi who is second in succession to the US presidency, postponed the scheduled trip to Taiwan in April after she was affected by Covid. Her comments in July about the need to show support for Taiwan, sparked speculations about her visit to Taiwan. The last high-ranked visit to Taiwan was over 25 years ago made by Republican Newt Gingrich in 1997. Against these developments, President Xi in a telephone conversation with President Biden reiterated that China’s position on Taiwan is consistent and resolute and warned, “those who play with fire will perish by it” and added, “the US should honour the one-China principle and implement the three joint communiques both in word and in deed”2.

Maintaining that the “one-China policy of the US has not changed and will not change”, Biden in response to the strong objection from Beijing said, “well, I think that the military thinks it’s not a good idea right now,” about Pelosi’s reported visit3. But President can’t force the legislative wing to change its decision as the Executive can’t undermine the Legislative branch in a democracy.

Beijing deems any deviation from the One-China policy as a “red line” and Biden fomented a nebula of suspicion with his repeated flip-flops. In a joint press meeting with Japanese PM Kishida in Tokyo, Biden said the US is prepared to defend Taiwan if attacked but the White House immediately walked back on his claim. The “strategic ambiguity” of the US stems from the Taiwan Relations Act, 1979, which offers to defend the democratic Taiwan framework providing for a diplomatic and economic relationship and would “consider any effort to determine the future of Taiwan by other than peaceful means, including by boycotts or embargoes, a threat to the peace and security of the Western Pacific area and of grave concern to the United States”4. (Meaning any embargo or boycott of Taiwan be considered a threat to peace).

America’s strategic ambiguity is rather intriguing, for the provisions of TRA permit the US to supply defence equipment to Taiwan but don’t guarantee that the US will intervene militarily if PRC attacks nor does it relinquish it. While Biden lived up to the guidelines of the TRA, his multiple gaffes have elevated temperatures in the region and provoked angry outbursts. Also, a recent surge in high-profile visits to Taiwan by US officials, which included Democrat and Republic senators, has made China jittery.

Signalling its disapproval of these developments, China began sending warplanes into Taiwan’s ADIZ (Air Defence Identification Zone). Indeed, China’s insecurity deepened as Taiwan’s recent successes in the fields of health, semiconductors and scientific technology has made it a natural magnet for productive collaborations drawing legislators from several Western countries.

This new global acclaim for Taiwan, together with the dire expansionist pursuits of Beijing has indeed, prompted countries like Japan to recommend the US to shift from a policy of strategic ambiguity to a policy of clarity. China’s recent announcement insisting its “sovereign rights and jurisdiction over the Taiwan Straits” and totally rejecting that these are “international waters”5 has only reinforced the concerns of countries in the region. Around one-third of global maritime trade passes through the Taiwan Straits which connects South China and the East Sea and China’s fresh claims over its sovereignty pose a grave challenge to the movement of commercial vessels.

Since the Ukraine crisis, China has been eyeing a forcible reunification of Taiwan and waiting for an opportune time to unleash its strategy. Setting the stage for the upcoming 20th National Congress of the Chinese Communist Party (CCP), where Xi is expected to nullify Deng Xiaoping’s two-term Presidency rule and claim his third term, addressing a study session of provincial and ministerial level officials on June 26-27, Xi has asked the party “to hold high the banner of socialism with Chinese characteristics and stay committed to driving forward the historic process of national rejuvenation”6. The reunification of Taiwan is the core aspect of the postulated national rejuvenation.

Hailing the efforts of the Central government in enacting law safeguarding national security in the Hongkong Special administrative region, in securing firm control over the region, Xi urged the party to “thoroughly review the international and domestic situation to have a clear understanding of the strategic opportunities, risks and challenges we face”. He stressed that “achieving national rejuvenation will be no walk in the park, and it will take more than drum beating and gong clanging to get there. We must undertake a great struggle with many new contemporary features and be prepared to work even harder toward this goal”.

Rightly so, amid burgeoning domestic troubles of real estate crisis, a slowing economy, and demographic decline, to distract the public attention, Xi is resorting to ultra-nationalist brinkmanship. Nancy Pelosi’s visit to Taiwan provided an opportune moment for China to intensify its reunification agenda. Taiwan besides being a prized economic and strategic asset is now being used by both the US and China as leverage.

After rather symbolic responses to China’s expansionist moves for over a decade, the US which lost its credibility is now using Taiwan to resurrect its position in this part of the world. Taiwan is a bridge that separates the two spheres of influence of the US and China and is strategically very important for both countries given Taiwan’s geographic location and its supremacy in semiconductors.

By ceding the island, the US would completely lose its influence in the region. It would pose a grave threat to US allies in the region. Also, considering the aggravating Sino-US strategic competition, the changing international scenario, the US need to prove its ability to control China’s strategic design toward Taiwan, Washington wanted to use Taiwan question as a tool.

Moreover, China’s remonstrance of “the US will bear the responsibility and pay the price for undermining China’s sovereign security interests”6 and PLA “will not sit idly by” if Pelosi makes a pitstop at Taiwan and strengthened the resolve of Speaker Pelosi, a supporter of Tibet and vocal critic of China’s human rights violation to go ahead with the visit. With the US heading for a midterm election, Pelosi who is almost on the fag end of her career, cognizant of the implicit domestic imperatives, couldn’t have cowered down to Chinese threats.

Though Biden doesn’t want an escalation, a cancellation of the visit would erode US’s strategic messaging and would indicate that the Chinese Communist Party (CCP) could dictate America’s Taiwan policy. While the strategic community and the policy wonks in the US are deeply divided over the visit with some outrightly arguing that the visit isn’t worth the risk, Pelosi landed in Taiwan. She held talks with Taiwanese President Tsai Ing-Wen and said, “America has made a bedrock promise to always stand with Taiwan. On this strong foundation, we have a thriving partnership grounded in self-government and self-determination focused on mutual security in the region and world committed to economic prosperity”8.

Slamming Pelosi’s visit as “extremely dangerous”, China stated, “the Taiwan question is purely an internal affair of China and no other country is entitled to act as a judge on the Taiwan question” and urged the US to stop playing the “Taiwan card” to contain China9. Ahead of Pelosi’s visit, China held live-fire exercises and military drills dangerously close to Taiwan. Shortly, after Pelosi’s arrival, Eastern Theatre Command announced long-range live-fire drills near Taiwanese islands, sent 21 fighter jets and fifth-generation J-20 planes into Taiwan’s air defence zone and threatened targeted military operations.

In response to Pelosi’s visit, China’s military and propaganda fronts went on an overdrive. In addition to the export ban on 100 Taiwanese products announced earlier, China has now suspended imports of citrus fruits, white scallop and mackerel and banned the export of natural sand used for producing silicon wafers in chip production. Ahead of the visit, the Taiwan Presidential Office website was hit by a cyberattack.

Flexing its military muscle, China is attempting a trade blockade on Taiwan. Beijing warned airlines to avoid the Taiwan airspace designated as “danger zones” and vowed disciplinary action against Taiwan Foundation for Democracy and Taiwan Foreign Ministry’s International Cooperation and Development Fund10. Stirring up nationalistic fervour, Beijing is now seeking refuge for its aggressive confrontation under the pretense of “upholding sovereignty”. While the Indo-Pacific region is aware of China’s combative belligerence, the world at large and the US would now experience the peaceful rise proclamations of Beijing.

With economic interests at stake, turning a blind eye to China’s expansionism, the US operational strategy has been strategic competition. Ever shy of calling China an adversary unlike its relative ease in terming Russia as one, the US is now at crossroads. To cater to its domestic interests and geostrategic alliances, the US has vowed not to abandon Taiwan. Will it now uphold the rules-based order and amend its strategic ambiguity toward Taiwan?

Though the US warned that the unilateral change in the status quo of Taiwan is unacceptable prospects of outright military war between China and the US are bleak thus far. But the current episode has created frictions in Sino-US relations which might be hard to revive. Interestingly, unlike the US, the Taiwan issue is essential fodder for Xi’s political fortunes and Beijing will perpetually indulge in war-mongering to defend its claims.  The moot point is whether Washington can deliver on its promise to Taiwan.