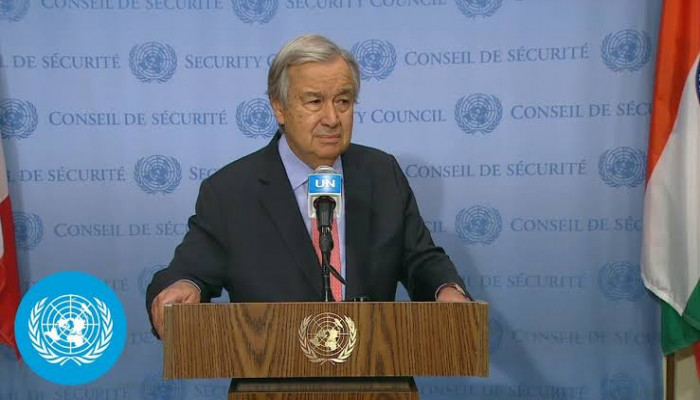 During a visit to Colombia, United Nations Secretary General Antonio Guterres called for an end to fighting in Ethiopia while in Colombia's capital Bogota on Wednesday. He also called for an immediate end to hostilities and urged Ethiopian leaders to follow the Andean country's example of peace.

Guterres was visiting to mark the five-year anniversary of the peace deal between the government and the demobilized leftist Revolutionary Armed Forces of Colombia (FARC) guerrillas.

"The peace process in Colombia today inspires me to make an urgent call to the protagonists of the conflict in Ethiopia for an unconditional and immediate ceasefire," Guterres said during a joint address with Colombia's President Ivan Duque.

In November 2020, a war broke out in the country's Tigray region between Ethiopian federal troops and the Tigray People’s Liberation Front. In July this year, the conflict spread into two neighbouring regions in northern Ethiopia.

Thousands of people have been killed since the conflict began with more than two million forced from their homes and 400,000 people in Tigray facing famine.

Guterres also urged Colombian lawmakers to ratify the Escazu Accord, an agreement among Latin American and Caribbean countries that enshrines protections for those working on environmental causes.

According to advocacy group Global Witness, Colombia is the most dangerous country for environmental defenders in the world, with a record 65 killed in 2020.

Colombia's government has blamed crime gangs and leftist rebels involved in drug trafficking for the rise in activist killings.

Guterres said a ceasefire should “allow for an inter-Ethiopian dialogue to resolve the crisis and allow Ethiopia to contribute again to the stability of the region.”

Earlier, Ethiopian government informed Ireland’s embassy in Addis Ababa that four of the six Irish diplomats stationed there must leave the country within the week. However, Ireland ambassador and one other diplomat have been permitted to stay.

According to a statement from the Department, Ethiopian authorities indicated that the decision was due to Ireland’s position on the ongoing conflict and humanitarian crisis in Ethiopia, articulated at the UN Security Council.

The Irish embassy in Addis Ababa remains open, and its focus will be “the provision of consular services, although the reduction of our diplomatic staff numbers by two thirds will inevitably affect our ability to fully provide such services,” Foreign Affairs Minister Simon Coveney said in the statement from the Department.

Coveney said that “for many months now … Ireland has been shining a spotlight on things that have been happening in Ethiopia that really are breaches of international law.”

He added that Ireland has led many of the political debates within the Security Council on the need for the UN to intervene, and to expose human rights abuses that have been happening there.

“We really are at the edge of a very, very dangerous situation, not only for Ethiopians, but also for their neighbours,” Coveney said, adding that Ireland has been and continues to be extremely vocal of this issue.

“Unfortunately, the Ethiopian government has taken that as Ireland speaking against them, that is not what we have been doing,” he said.