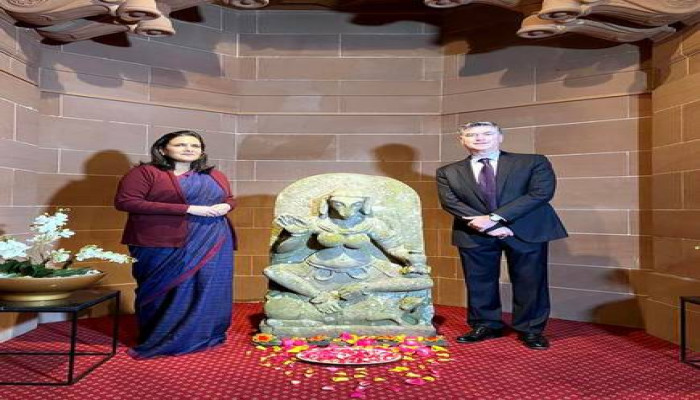 An ancient Indian sculpture dating back to the 10th century was returned to India after being illegally removed from a temple in Uttar Pradesh and discovered in England around 40 years ago on Friday. Yogini, the goat-headed goddess, vanished from Lokhari in the 1980s and reappeared in 1988 on the London art market.

According to news agency PTI, Chris Marinello of Art Recovery International, the organisation that assisted in the repatriation of the idol, at the High Commission of India in London returned the idol to the Indian High Commissioner to the United Kingdom, Gaitri Issar Kumar. The sculpture, which is part of a Yogini set from Lokhari Temple in Bundelkhand's Banda area, will now be sent to the Archaeological Survey of India (ASI) in New Delhi. Chris Marinello called Vijay Kumar, who is the Co-Founder of the India Pride Project, that aims to restore India's lost artefacts, who was able to identify the sculpture.

At a transfer ceremony at India House, Gaitri Issar Kumar stated that it is really auspicious to be receiving this Yogini on Makar Sankranti, according to PTI. Kumar also said that this will now be forwarded to the ASI, who will likely send it over to the National Museum.

It is very auspicious to be receiving this Yogini on Makar Sankranti,” Ms. Kumar said, at a handover ceremony in London at India House.

“The process of repatriation was completed in record time after the High Commission was made aware of its existence in October 2021. This will now be sent to the ASI and we assume they will hand it over to the National Museum,” she said.

Kumar recalled the “happy coincidence” during her diplomatic tenure in Paris that another ancient sculpture of a buffalo-headed Vrishanana Yogini, apparently stolen from the same temple at Lokhari, had been recovered and repatriated to India.

The goat-headed Yogini is most likely to end up at the National Museum in New Delhi. Yoginis are powerful female divinities that are involved with Tantric worship. They are worshipped as a group, usually in groups of 64, and are thought to have limitless abilities.