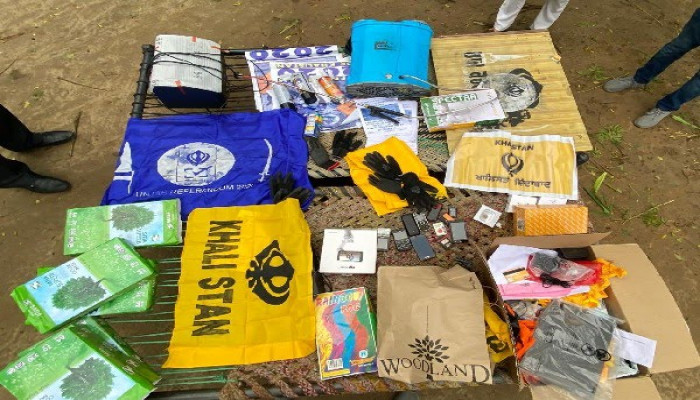 British police carried out raids on the Hounslow office of the group Sikhs for Justice (SFJ). The outfit was banned by the Indian government in 2019 under the Unlawful Activities (Prevention) Act for promoting secession and violent militancy in Punjab.

Founded in 2007, SFJ is a primarily US-based organisation that has been demanding a separate homeland for Sikhs in Punjab, dubbed “Khalistan".

Sikhs for Justice (SFJ), fake "Referendum" on the creation of Khalistan, for a separate Sikh nation was exposed in a raid by UK police that said that very few people participated.

According to DailySikh, the UK Metropolitan police carried out a raid on the office of Sikhs for Justice (SFJ) located on the First floor of Sadda Superstore, 356 Bath Road, Hounslow, UK on November 15.

The police took away all electronic devices and documents pertaining to the so-called 'Referendum' held by the SFJ recently. While the 'Referendum' turned out to be a farce with very few people participating.

There was speculation that SFJ members were using various electronic devices to create fake Identity cards and relevant documents pertaining to bogus voters in order to push up the voting numbers during the 'Referendum'.

Police had received information regarding nefarious activities being carried out by SFJ representatives at their office. Significantly, police detained an individual with links to Pakistan.

The British Sikh community are generally aware of the latest developments including the search having been carried out at the SFJ address and are relieved that finally, the law is taking its course in controlling the activities of SFJ.

The majority of members of the Sikh community consider the SFJ and other Khalistanis as nothing short of "nuisance value" whose only agenda is to raise funds and use Khalistan for their personal economic benefits, as per the DailySikh.

The community has been angry over the years for such elements have tried to create a rift within the British Sikh community and among Sikh and British Hindus.

There is thus a broad consensus among the Sikh community that UK law enforcement authorities should take strict action against the "hate campaign" being carried out by certain elements in the name of Khalistan which is spoiling the name of peace-loving British Sikhs.

The National Investigation Agency this month requested the Canadian government to declare Sikhs for Justice a terrorist entity in the country.

Earlier in September, Punjab police had busted an SFJ module and arrested three of its members after recovering lakhs of pamphlets promoting ‘Referendum 2020’ activities during a raid at village Rampur in Khanna.