Two decades since 9/11, Americaâs war on terrorism turned out be an unmitigated disaster 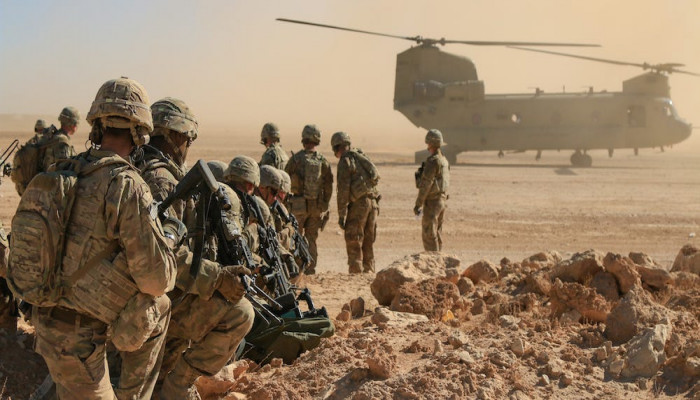 In keeping with the Trump’s military retrenchment, President Biden, in April, announced the withdrawal of troops from Afghanistan by September 11th, the 20th anniversary of fall of twin towers in terrorist attacks. The bizarre symbolism is not lost on the World which enigmatically rued America’s move. In the aftermath of 9/11 in 2001 President Bush announced Global War on Terrorism (GWT) and attacked Afghanistan.

Two decades later the GWT have come full circle with Taliban government taking charge in Afghanistan on the very day America suffered its worst terror attack. Facilitating the return of a Caliphate through a Faustian bargain America not only emboldened the terror groups across the globe but inadvertently paved way for annihilation of an indigenous culture in Afghanistan.

In the wake of return of fundamentalist Islamic regime fearing persecution, even the last of Hindus and Sikhs have majorly migrated to India along with their deities. The harrowing experience of fleeing their ancestral homes will forever be etched in collective memory of the Indic civilization which had to bear the brunt of intolerance and ideologically inspired extermination of Indic civilisation in Afghanistan.

Against the stated position of Afghan-led, Afghan-controlled, Afghan-owned peace process for Afghanistan, America’s disgraceful exit led to the emergence of Taliban-led and Taliban-controlled government. By ceding ground to Taliban who sheltered the Al-Qaeda the perpetrators of 9/11, America has miserably lost its touted “forever war”.

Barring the lone objective of averting major terror attacks on its country, America has terribly failed in its mission. A slew of mispriorities, ill-conceived judgements and undeserving generosity has entangled the country into more conflicts. As the super power of a unipolar world at the height of its glory, America attacked Afghanistan and then giving into proclivities of top members invaded Iraq.

Deeming the 9/11 attacks as a war against the civilized war, US along with NATO members, Northern Alliance and ethnic Pashtuns launched the first military salvo “Operation Enduring Freedom” on October 7th,2001. With less than 3000 troops on ground, in the first 100 days, America destroyed Al-Qaeda, disrupted its terror networks, global finances, terror camps and drove Taliban out of power.

In the fierce fighting between the coalition forces and Taliban, many terrorists were neutralized. But at the behest of Rawalpindi, US turned a blind eye to a stream of terrorists that found safe havens in Pakistan. The master mind Osama bin Laden also fled to Pakistan.

After the collapse of Taliban regime, US installed an interim government comprising of all factions of Afghanistan by Dec 5th 2001. Intensifying combing operations against Al-Qaeda, coalition forces unveiled “Operation Anaconda” in March 2002 and the US announced a reconstruction assistance to Afghanistan till 2009. Operation Anaconda wasn’t quite successful though, since America’s focus has shifted to Iraq where forces were diverted. After installing the transitional government led by Hamid Karzai in 2002, Major Donald Rumsfled declared an end to major combat on May 1st 2003.

Instructively, having destroyed the terror networks, America should have ideally pulled back from Afghanistan. But expounding the doctrine of weak-nations and ungoverned spaces becoming the festering grounds for terrorist activities, embraced ‘nation-building’ project. Subsequently, undertaking its first operational commitment outside Europe, NATO began growing the International Security Forces (ISAF) in Afghanistan.

By 2005, with the first democratic elections and a constitution a new political system was in place Afghanistan. Barely a year into first democratic government, violence resurfaced, and owing to rifts in coalition forces, a deadline of 2008 was set for withdrawal of foreign forces and take over by the Afghan national forces.

In response, President Obama deployed more troops to Afghanistan in 2009 and stepped-up nation-building efforts calling for provincial reconstruction teams (PRTs). He even rolled out a new American strategy indicating that a success in Afghanistan is linked to stable Pakistan and began pumping more funds. Even as the World could see through the double game of Pakistan, America deepened its ties with Islamabad. America’s strategic blunder stared in its face when the Marine corps, traced and hunted down Osama bin Laden in Abbottabad in 2011, a stone throw away from Pakistan military base.

Amid talks of gradual troop withdrawal from 2011, their numbers surged to its highest by 10th anniversary of Afghan mission. While America continued to drag its feet to withdraw troops, terror groups used to opportunity to regroup and stoke insurgency.

In 2013, America stopped combat operations and handed over security control to Afghanistan forces. By then, the terror outfits who fled to Pakistan started penetrating the rural provinces. As per some reports, terror groups gained ground in over 50% of Afghanistan. Reluctant to rein in and sanction Pakistan, US slowly lost the war to Pakistan-controlled terror groups.

Notwithstanding its mechanisms like FATF (Financial Action Task Force) created post 9/11 to disrupt terror activities, America’s series of missteps and its penchant for good and bad terrorist classification have proved to be counterproductive. America’s dubious position on terrorism is truly intriguing. America’s poor understanding of terrorism that stems from a malicious ideology of jihad despite its pernicious war in Afghanistan is rather alarming.

In pursuit of its strategic goals, America began arming terror groups in Libya and Syria to topple regimes. Thanks to these ill-conceived acts, Iraq, Libya, Syria, Afghanistan have turned into contestation ground for various terror groups.  Deprived of peace and stability, thousands of citizens began fleeing these countries sparking an unprecedented refugee crisis surpassing even the World War-2 numbers. With these acts, America normalized the process of arming one terror group to take on another.

America’s selective strategy towards various terror groups is rather amusing. In 2017, attempting to revamp its Afghan policy, US attacked the hideouts of IS-K group which is gaining ground in Afghanistan with a weapon, colloquially referred as “the mother of all bombs”. America’s duplicitous approach towards terrorism puzzled analysts who couldn’t reason out US keenness for peace process negotiations with Taliban and its attacks on IS-K. Rolling out similar strategy, in the light of IS-K attacks on Kabul airport during evacuation, US military openly supported the idea of coordinating with Taliban to attack IS-K.

Ironically, America’s yardstick for terror threat from groups has been transmuting rapidly. In 2001, America implored on UNSC to designate Taliban and Al-Qaeda as terror groups. In the next decade and half, abandoning its stated position, US made quick amends to its approach, calling for lifting of sanctions on designated sanctions in return for mythical peace, bestowed legitimacy and made it an important stakeholder of Afghanistan.

In a press statement post IS-K, Kabul attack, terming IS-K is an archenemy of Taliban, President Biden almost whitewashed the atrocities of Taliban and rued IS-K rise.  Through its willingness to co-opt Taliban, US has condoned the Taliban. US message of using terrorism as strategic weapons for its interests is not lost on the terror outfits. Going ahead, these groups, might inexorably use this very weapon as a bargaining chip against the US.

Two days ago, a White House statement praised Taliban of being “cooperative” and “professional” for permitting the American citizens to leave Afghanistan. America’s reconciliatory approach towards a Taliban government comprising of 17 listed terrorists is appalling.

From sharing the details of Afghan interlocutors and others seeking refuge with Taliban and recklessly leaving behind the biometric data of Afghan security forces, the unending series of America’s missteps continues to baffle the World. With its ignominious and embarrassing exit, America inflicted an unmitigated disaster on Afghanistan and the entire region.

Except for the saving grace of not suffering any major terrorist attack since 2001, losing over 2000 personnel and  expending $6.5 trillion1 in its war on terror America retreated from Afghanistan pushing it into darker ages. America’s unceremonious and humiliating exit will stand out as textbook case of what not do in a war against terror.

By failing to evolve a coherent and cogent policy even after engaging 20 years in the so called war against terrorism, the US reputation is in free fall.