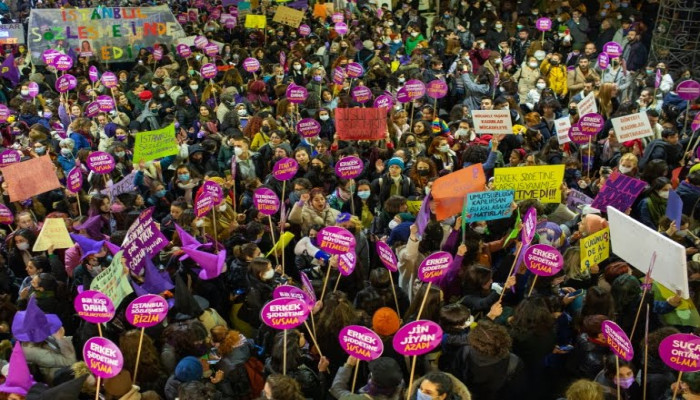 Turkish police fired pepper gas and rubber bullets on Thursday to push back thousands of demonstrators, many of them were women, who took to the streets of Istanbul to mark the International Day for the Elimination of Violence against Women.

The group marched to the city centre's Taksim Square, blocked off with barriers amid a heavy police presence. The police after urging the crowd to disperse, fired the gas and scuffled with the protesters.

The protesters chanted and held up banners, demanding urgent action against gender-based violence in Turkey.

"We are not silent, not afraid, not obeying," chanted the demonstrators, who rushed at the police barriers.

At the start of July, Turkey withdrew from an international treaty to combat violence against women, known as the Istanbul Convention and negotiated in Turkey's biggest city in 2011, in a move strongly criticised by Western allies. It is a landmark agreement to protect women that includes 45 countries.

Erdogan announced the withdrawal in March, saying Turkey would use local laws to protect women's rights.

While Turkey is the first to withdraw from the agreement, it was earlier the first country to sign onto the convention. The government of President Recep Tayyip Erdogan claims that the initiative had been “hijacked by a group of people attempting to normalise homosexuality”.

According to the We Will Stop Femicide platform, at least 285 women have been killed by men so far in 2021 in Turkey. It is a non-governmental organisation that tracks such incidents and lobbies for killers to be prosecuted.

On Thursday, Turkey’s Interior Minister also acknowledged his own ministry’s statistics on femicides in the country showed this year was on track to exceed last year with 251 women killed by November 15, compared to 268 in 2020 but the government was working to bring that number down.

“These are not just statistics, this is a matter of human lives, and we need to address this issue quickly,” Süleyman Soylu said at a meeting to review a national domestic violence reporting system. “We see violence against women as a humanitarian issue, and we cannot tolerate even one loss of life.”