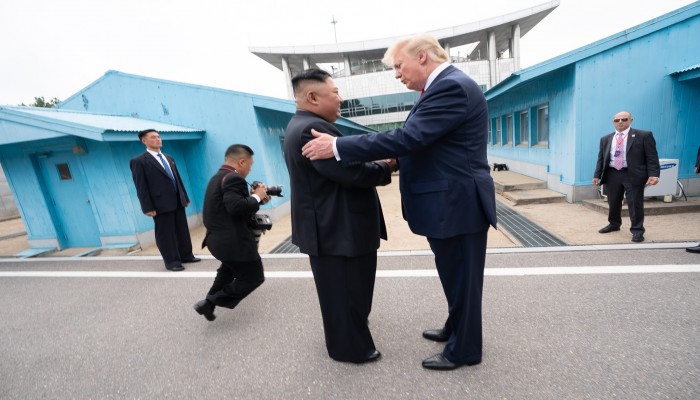 Known for his characteristic uncertain foreign policy moves, President Trump surprised everyone with his impromptu invitation to North Korean Supremo Kim Jong Un to meet at DMZ (Demilitarized Zone).  Wrapping up the G-20 Summit at Osaka, Trump traveled to South Korea and paid a visit to DMZ, the buffer zone between the two Koreas. Known to be an intense conflict zone, laden with thousands of booby traps, the region even poses major security challenges to both countries, the region is extremely significant for both Koreas. Previously, American Presidents- Bill Clinton, George Bush and Barak Obama had visited the DMZ. But Trump became the first American President to script history by crossing over to North Korean part of the territory through DMZ at the behest of DPRK leader Kim.

US and North Korea have a signature topsy-turvy kind of relations; therefore Trump’s twitter invite to Kim generated huge interest. Back in 2017, in response to North Korea’s string of missile tests, Trump left no stone unturned to unleash fury on Kim for creating a reign of instability in the Korean Peninsula. Upping his attack against North Korea, in his maiden address at the UN Assembly in 2017, Trump referred to him as a “Rocket Man on a suicide mission” and threatened to “totally destroy his regime”. North Korea condemned Trump’s public mockery and called him “mentally deranged US dotard”. Elsewhere Trump aggressively warned North Korea “(they) will be met with fire and fury like the World has never seen”.

But the things took a conciliatory turn, after President Moon Jae, an advocate of Sunshine policy batted for rapprochement between Koreas in his Presidential campaign, initiated confidence-building measures. He warmed up to North Korea and sent an official invite for the Winter Olympics. Symbolizing truce, a unified Korean team took part in the Women’s ice hockey event. Adding momentum to confidence-building measures, President Moon, on his state visit to Washington, urged President Trump to initiate North Korean outreach and prepared ground for the peace talks. This eventually paved the way for the first summit meet between Trump and Kim at Singapore in June 2018 which began with much fanfare. Reiterating his commitment to bring peace to Korean peninsula, ahead of the talks, Kim ordered the suspension of proliferation activities including development of Intercontinental Ballistic Missile (ICMB) capable of reaching American shores. Trump, on his part, canceled joint military exercises off the South Korean coast.  During the first meet, both leaders agreed to “word towards denuclearisation”.

Both leaders, known to be tough negotiators, conceded little. But Kim walked with an advantage of having shed the image of “hermit king”. The summit helped North Korea in main streaming itself and diplomatically absolve its global pariah status. For long, North Korea was shunned for its human rights violation record. In the runup to Singapore Summit, Kim renewed outreach with China, Russia, Korea, and also meet with leadership of Singapore.

From the beginning, while Trump batted for complete, irreversible, and verifiable nuclear nuclearization, Kim reiterated that denuclearisation must be complete, implying evacuation of America’s nuclear assets from South Korea leading to denuclearisation of Korean Peninsula. Showing his firm intent, North Korea returned remains of fallen American soldiers and dismantled Sohae Satellite Launching Station used for assembling space launch vehicles and developing liquid fuel engines for ballistic missiles. At the inter-Korean summit in September 2018 both Koreas signed a Comprehensive Military Agreement to reduce tensions in the Korean peninsula. Additionally, DPRK pledged permanent dismantling of nuclear site region, Yeongbyeon and called for delivery of “corresponding measures” by America, which by definition implied the removal of official sanctions.

Kim Jong Un, unlike his predecessors, advocated byungjin policy, expounding simultaneous economic and military development. Ever since Kim took over DPRK after the death of his father, Kim Jong Il in 2011, he focussed on nuclear development despite sanctions of 2006 nuclear testing and explored ways to boost economic progress. Kim Jong Un’s ideology is effectively an amalgamation of juche (the battle cry of DPRK’s industrial policy) meaning spirit of self-reliance of depending on its own powers, adopted by Kim Il Sung, back in 1950s and Songun Chongch (Military First) the clarion call of Kim Jong Il to deter US-ROK (Republic of Korea’s) aggression. In his new year message to America, Kim appealed for a relief from sanctions, an essential breather for North Korean economy. Anticipating partial relief from sanctions, DPRK readily agreed for a second summit at Hanoi in February.

However, America dangled some concessions like reconsidering joint military exercises with South Korea, opening of a liaison office in DPRK and a formal declaration of end of Korean war. These “corresponding measures” of America reflected its inflexible and rigid approach. Indeed, America believed that in exchange for a comprehensive lifting of sanctions, it would convince Kim to give up its stockpile of nuclear weapons. Cognisant of America’s combative actions in Iraq and Libya, Kim refused to yield to America’s concessions. Kim offered to have an interim agreement whereby DPRK offered a formal moratorium on ICBM and missile testing. He sought partial lifting of sanctions in return. But America demanded a total surrender of diligently accumulated nuclear assets in return for a comprehensive relief. Given America’s previous experience of DPRK’s violation of nuclear moratorium, US rejected DPRK’s stepwise dismantling of nuclear sites. DPRK which felt enthused by Trump’s praises of Kim in the run up to the Hanoi Summit felt let down. Kim walked out of the summit. Post-summit, DPRK officially announced that Kim has lost the will to negotiate further.

Given the intransigent approach of Trump failure of Hanoi summit was written all over the place. After its eventual failure, the possibility of a one on one meeting between of the leaders seemed negligible. Since then, for months there was hardly any communication between both countries. Trump’s impromptu meeting with Kim at the DMZ reignited hopes of diplomatic talks. If reports are to be believed, the meeting is said to be fruitful. DPRK appointed Kim Mong-gil former NK’s ambassador to Vietnam, who actively oversaw the Hanoi Summit will lead Korean negotiation team. He will replace Kim Hyok-chol rumoured to have been purged after the failure of Hanoi summit. An American delegation will be headed by US special representative for North Korea Stephen Biegun. A fresh round of talks will be held in Thailand soon.

Instead of “complete denuclearisation” whose definition and terms are not clear as yet according to NYT, softening stance, America is now calling for the total freeze of North Korea’s nuclear program. Though hawks National Security Adviser Bolton rejected this new approach as reprehensible, flexibility in North Korean talks must be seen together with President’s decision of stalling attacks against Iran at the eleventh hour.

Diplomatic negotiations between the US and DPRK have considerably defused tensions in East Asia. But simmering US-Iranian crisis in the Persian Gulf is posing a threat to global energy security and peace as well. Interestingly, Trump’s DPRK model is in sharp contrast to his Iranian approach. By inviting DPRK to negotiation table, Trump legitimately acknowledged North Korea as nuclear power. In the process, he has set a precedent that America would rather cut deal with a nuclear capable country than attack it. Kim, who has rightly assessed American propensity for impulsive action, is now using the nuclear deterrent to strike a deal. After acquiring nuclear capabilities, ICBM’s and dozens of ballistic missiles, Kim besides meeting Trump thrice, has not only refused to concede but is trying to extract concessions despite being a repeat violator of nuclear freeze. With his obscurantist approach Kim has set an example and Iran would definitely emulate this to have its way. While US-Korea hardly made any progress, Trump’s penchant to negotiate authoritarian Kim despite failed summits underscores his pursuit to script history and earn laurels as a deal maker.

While America continues to threaten Iran with more sanctions and isolation if it accelerates Uranium enrichment, Trump’s shift in stance after the Panmunjom (DMZ) talks symbolised his double standards. His contrasting stands on two nuclear threats is sending confusing signals. Both DPRK and Iran are designated as dangerous countries for their implacable tendencies and are also known for heightened anti-Americanism. His stern warning to Iran for surpassing uranium enrichment level as opposed to rewarding DPRK with one more chance of diplomatic negotiation is intriguing. Through unilateral withdrawal from the iconic P5+1 Joint Comprehensive Plan of Action (JCPOA), Trump has stirred a hornet’s nest. Despite its fallacies, the deal has successfully halted Iran’s nuclear aspirations and brought a semblance of stability in the region.

Interestingly, Trump’s reconciliation towards DPRK and disastrous dismantling of Iranian deal took place around the same time.  Ironically, on the pretext of giving enough rope to Iran, Trump pulled the plug on Iranian nuclear deal but now he is ready to come down from “complete denuclearisation” to “total freeze” of nuclear weapons to DPRK. While Iran is facing international pressure for exceeding limits of enrichment which are way short of developing a weapon, concessions await DPRK on the negotiation table. Though both countries refused to succumb to America’s unilateral disarmament, the only difference appears to be DPRK’s readiness to negotiate as opposed to reluctance of Iran for a direct dialogue. But with his summit meets America acknowledged North Korea as a nuclear power.

Though it might be perfunctory to drawn parallels between nuclear issues of DPRK and Iran, in the absence of a firm and unequivocal commitment towards nuclear proliferation and disarmament doctrines, America is at risk of stoking more tensions than defusing them.