Thousands march in Kandahar to protest against Taliban evictions 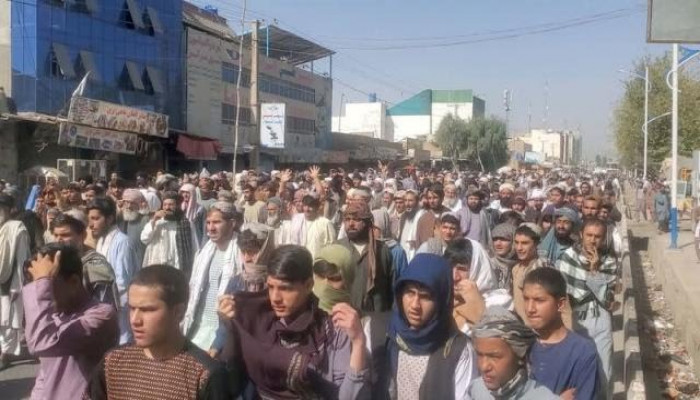 Thousands of protesters from a neighbourhood populated by former Afghan army servicemen marched in Kandahar Tuesday against plans by the Taliban to evict them from their homes.

Residents of Zara Ferqa, a suburb made up of government housing and ramshackle huts, said they had been ordered to leave by the Taliban, but had nowhere else to go.

One resident said they were told to vacate their homes and give them to Taliban fighters.

The affected area is predominantly occupied by the families of retired army generals and other members of the Afghan security forces.

The families, some of whom had lived in the district for almost 30 years, had been given three days to vacate, the official, who had spoken to some of those affected, said.

The crowd, mainly made up of men and youths, along with some women, many burqa-clad, took to the streets despite the Taliban having banned unauthorised protests after taking power on August 15.

Protesters gathered in front of the governor's house in Kandahar after around 3,000 families were asked to leave the colony, according to the former government official who witnessed the crowds.

Footage from local media showed crowds of people blocking a road in the city.

Some reporters covering Tuesday's march said they were harassed and beaten by Taliban guards along the route.

Kandahar is Afghanistan's second-biggest city, as well as the birthplace of the Taliban movement and its spiritual heartland.

Taliban spokesmen did not immediately respond to a request for comment on the evictions.

Sporadic protests against the Taliban, who swept to power in Afghanistan with the capture of Kabul almost a month ago, have ended in occasionally deadly clashes, although there were no confirmed reports of violence on Tuesday.

Taliban leaders have vowed to investigate any instances of abuse, but have ordered demonstrators to seek permission before holding protests.

The United Nations said on Friday the Taliban's response to peaceful protests was becoming increasingly violent.