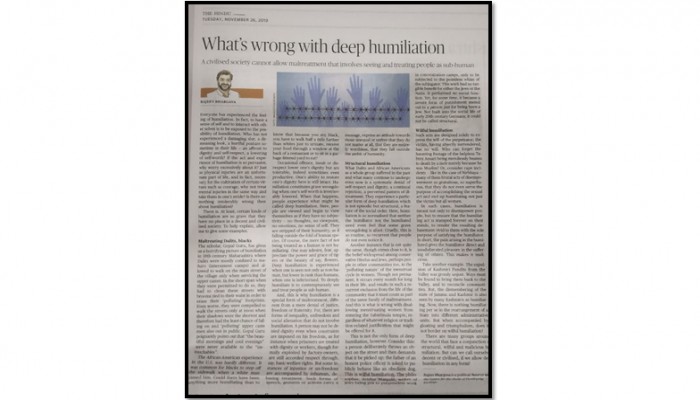 “What’s wrong with deep humiliation” screamed the op-ed headline in The Hindu.

I couldn’t help but wonder why anyone would even want to discuss or debate what is wrong with humiliation! I mean, isn’t it humiliating enough to discuss why humiliation is wrong?! It stuck to me that this is The Hindu and perhaps there is an ulterior motive in this.

The article largely revolves around rhetoric on Dalits and African-Americans. And then the ulterior motive hits you. And it hits you hard. Because we are told that “The expulsion of Kashmiri Pandits from the Valley was grossly unjust.”

Expulsion, dear The Hindu? Expulsion? Expulsion is when a teacher asks a student to stand outside the class. Humiliation is when you assume your reader needs a lecture on why it is wrong to humiliate. Neither of these adjectives remotely qualify to explain what the Kashmir Pandits have gone through.

Because Kashmir Pandits were murdered. In cold blood. You know it, and yet would not even care to acknowledge it. They were dragged from their homes and murdered. Journalists performing their duty were shot dead merely because they were Kashmir Pandits. Not humiliated, not expelled, but murdered.

Because Kashmir Pandits were threatened. Through public announcements from the speakers of Mosques. Through phone calls to their homes.  By terrorists with weapons. Threatened to either leave, convert or get murdered. Not humiliated, not expelled, but threatened.

Of course, you know all this. Because you and your ilk conspired to NOT tell us their story. For years together. I didn’t even know such a carnage happened right here in our country. The surviving Kashmiri Pandits had to further live in the ignominy that their story wasn’t being heard or written about.

Do you want to know further what is “grossly unjust”? You telling us that “Ways must be found to bring them back to the Valley, and to reconcile communities.” Oh, how so sweet of you! If you hadn’t given us this phenomenal piece of advice, us ordinary souls wouldn’t even thought about this. You could have redeemed yourself by dwelling more into what are the different “ways to bring them back to the valley”.

Instead what do you do? Humiliate the survivors further. How? By telling us that “But, the dismembering of the state of Jammu and Kashmir is also seen by many Kashmiris as humiliating.” At this point, words fail me. Did you really compare the reorganization of a state to murder? Did you actually use the word “dismember” and not in the context of the actual dismembering of many Kashmir Pandits on that fateful January in 1990?

How low of you to compare an event where no lives were lost, to the ghastly crime of murder and carnage?  It is already humiliating that your ilk has kept away this story from us for such a long time. What prompts you to add further fuel to it?

Perhaps you did realise how pathetic your comparison was. And that’s why you told us in the very next line that “Now, there is nothing humiliating per se in the rearrangement of a State into different administrative units.” How very noble of you. But if you were really serious about it, you wouldn’t have made the comment in the first place. And your very next line confirms your small-minded thought process. You ask us - “But when accompanied by gloating and triumphalism, does it not border on wilful humiliation?”

You know what - It is your article that amounts to “willful humiliation”. Not just to the Kashmir Pandits. But to the very Dalits and African-American community you refer to for most part of your article. To trivialize their travails and to compare their trauma to an event in which there was NO loss of life, simply exposes the depths to which you will plunge to. The story of Kashmir Pandits would have died a natural death if not for the internet and social media.

I grew up reading The Hindu and I have never known the story of Kashmir Pandits until the Internet ear dawned upon us. Only after the Social media era began is when I came to know the ghastly details of that carnage in January 1990. This deadly conspiracy to keep this story from reaching the country is simply unbelievable. And even in this age of information, The Hindu thought it could get away with merely terming the entire saga as a “grossly unjust expulsion”. Nothing can be more humiliating than that!