There is Zero Ground Level support for TDPâs unholy alliance with Congress. 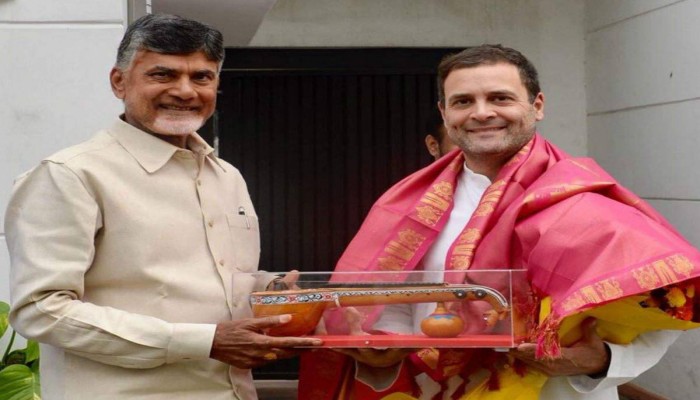 A couple of days ago, Congress leader and former Chief Minister of Rajasthan, Ashok Gehlot visited Vijayawada to meet new ally Chandrababu Naidu (CBN). This was about a week after Chandrababu Naidu met Rahul Gandhi and announced an alliance with the Congress party. During this one week, not a single Congress leader from the Andhra Pradesh Congress has met CBN. One would assume that perhaps they waited for some senior leader to come to Andhra Pradesh and the regional leaders can tag along.

However, when Ashok Gehlot met CBN, not a single AP Congress leader accompanied him. It was only Ashok Gehlot and a whole  bunch of TDP leaders who were eager to be photographed with CBN and Gehlot. An on November 12th, the AP Congress President categorically stated that the only direction from the High Command is to strengthen the party, and there has been no talk of any alliance! Unfortunately, the news I saw (ETV, 12th November 8pm news) is not available online. However, there are a few newspaper reports that quote the AP Congress President telling us that “In AP, Congress will decide the fate of regional parties.” The arrogance of Congress aside, doesn’t it strike as odd to you that ground level leaders of the dead Congress party are unable to fathom the deal Rahul Gandhi and Chandrababu Naidu made? What else explains their reluctance to meet CBN till date? Have you ever heard of regional Congress leaders not accompanying Central congress leaders? The level of opposition between the TDP and Congress is very strong and therefore this reluctance is on full display.

Meanwhile, telugu media is parroting and amplifying CBN’s every statement, where he is claiming that he is uniting all parties in an anti-BJP coalition. After meeting Rahul Gandhi, CBN went and met H.D.Kumaraswamy. He then went and met M.K.Stalin. And the entire media was celebrating CBN as the great unifier. And this clamor provoked an interesting response on Social Media. JD(S) and Congress are already in alliance. DMK has been in alliance with the Congress since more than 10 years. Why is CBN mysteriously going around claiming that he is stitching an already stitched alliance? The Congress has already stitched up alliances with the SP in addition to JD(S), RJD, SP, and DMK – what exact role will Chandrababu Naidu play with these parties? Will he now sit and resolve seat sharing issues between these parties?

Earlier, CBN had met Arvind Kejriwal and Mamata Banerjee. Are we to assume that the Congress and AAP will contest elections together in Delhi? And hope to really win? Mamata Banerjee hasn’t committed anything yet. As of today, Mayawati hasn’t even allied with the Congress in states like Madhya Pradesh CBN is making a lot of noise about meeting these leaders and inviting them to a conclave type of meeting. A lot of leaks are being put out saying CBN is the great unifier. All these silly attempts and statements by CBN are very amusing. By meeting allies of Congress and claiming that he is unifying them with Congress, what exact message is he trying to send?

I had earlier written on how disappointing it was to note that CBN chose to ally with this Congress party. Many old videos were released where he had attacked the Congress party. However, the most revealing videos have been of CBN’s speeches on the floor of the assembly - praising Prime Minister Modi as the as the only PM who bought name to the country; an assembly resolution thanking the PM for granting special package to the state; a challenge to parties to explain to him how special status is better than special package! Just two years back, there is also a TV interview where CBN has called for a permanent boycott of the Congress party! CBN’s current strategy is as disgusting as Arvind Kejriwal’s 2013 strategy of taking help from Congress party to run his government.

While it remains to be seen how this alignment will impact 2019 elections, as of today, there is zero ground support for this unholy alliance that CBN has formed. And there is all around amusement of CBN meeting allies of Congress and claiming he is unifying them!