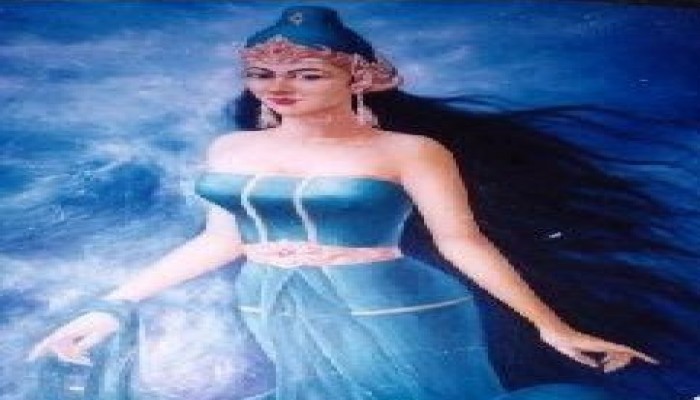 This is the story which pieces together different Indianized Hindu kingdoms/empires of Indonesia whose leaders had valor and honor which was no less than many of the Dharmic kingdoms of India. This is the tragic tale of the Hindu Princess of the Kingdom of Sunda, which influenced the Balinese into preserving their culture and religion. Now, even after centuries the island of Bali is a Hindu majority population. This story also talks about the eminence of the Majapahit empire and its heroes, Emperor Wayam Wuruk and Prime Minister, Gajah Mada. There were no villains in this melancholic tale, only misunderstanding and miscommunication between different honorable souls.

After the retirement of Queen Tribhuwana’s golden era 1, the Empire of Majapahit reached its zenith under her son, Emperor Hayam Wuruk or Sri Rajasenagara Jaya Vishnuvardhana. He ascended the throne in 1350. The hero of the Golden era, Gajah Mada, the Mahapatih (Prime Minister) continued to be the Prime minister under the new emperor having grown into an elderly statesman. The Kingdom of Sunda, in the west of Java was the last remaining independent Kingdom in the Nusantara (archipelago of Indonesia and Malay) as Gajah Madah was near to fulfilling his Palappa oath 1. The Kingdom of Sunda, an Indianized kingdom which included the modern-day Jakarta and the surrounding region in West Java followed Hinduism since 4th CE. Perhaps influenced by the Kalingas, who were the early traders cum sailors to these parts.

In 1357 CE, proposal for marriage, between the princess of Sunda, Citra Rashmi or Dyah Pitaloka Citraresmi daughter of Maharaja Lingga Buana, King of Sunda and young emperor Rajasenagara was received. Princess Rashmi was born in 1340 and was 17 years old at the time of the marriage alliance.  Most members of the Royal family of Sunda traveled to the Majapahit empire and camped in the northern part of Trowulan, the capital in a square called Bubat. The Emperor, Rajasenagara, having fallen in love with the beautiful princess Citra Rashmi, sent his trustworthy statesman, Gajah Mada to Bubat Square to finalize the marriage alliance. Due to some misunderstanding/miscommunication, the alliance talks failed. The King of Sunda, Maharaja Lingga Buana aspired of a friendship between the two Kingdoms through marriage while Gajah Mada was of the impression that Kingdom of Sunda would become a vassal state of the Mighty Majapahit empire through the alliance. A fight erupted between the Majapahit empire and the Maharaja Lingga Buana’s soldiers at Babut Square, where the Maharaja and his soldiers fought bravely but fell subsequently. The young princess, heartbroken hearing her father’s death as per the code of honor of Kshatriyas committed suicide along with others in the royal family and her maids.

Gajah Mada, took the blame for the bloodshed in what is today called as the Incident of Bubat and retired at a place called Madhakaripura in modern day Probolinggo in East Java. Thus, ended the glorious saga of Gajah Mada who died in 1364.

The emperor Rajasenagara was both heartbroken over the suicide of the princess and the bloodshed. He did not marry for few years. Subsequently he married his half-sister, Paduka Sori in 1365. He continued to rule till 1389. He expanded the empire to include other islands and regions corresponding to modern Papua, West Papua and even the few islands of the Philippines. His illustrious era, similar to Rajendra Chola, finds an illustrious mention in Nagarakretagama written by a Buddhist monk, Prapanca in a palm leaf manuscript or Lontar. This manuscript which is the primary source, provides an insight to the periods of Queen Tribhuwana and her son, Emperor Rajasenagara.

As for the Kingdom of Sunda, the youngest son of Maharaja and the brother of Princess Citra Rashmi, Prince Wastu ascended the throne in 1371 assuming the name Raja Wastu Kancana. He is credited with ruling the Kingdom of Sunda for a long period as an Independent territory.

Influence of the Princess Citra Rashmi on Bali

Balinese’s Hinduism practices were influenced by the Majapahit empire. A priest from the Majapahit empire, Dang Hyang Nirarth traveled to Bali in 15th CE and founded the Saivite priesthood in Bali. Legend has it that he traveled in a giant Pumpkin using his magical powers after the boat he traveled, developed leaks. So, till day Brahmins of Bali do not eat Pumpkins. He landed on the rock of what is today the Tanah Lot temple and meditated and preached to the nearby villagers. He encountered resistance from the local chief but showcased his magical powers by moving the rock into the sea and having sea snakes to protect the rocks, which impressed the chief, who along with his followers started following the priest.

Thus, the Balinese were influenced by the Hindu religious practices of Majapahit empire that they carry even today. But the Balinese did not take to the Bubat incident lightly. They recognized the valor of the Sunda royals, especially the Princess Citra Rashmi’s suicide which is recorded in the Balinese manuscript, Kidung Sunda. They considered the action of Gajah Mada Un-Kshatriya like act on the part of Majapahit empire.

The suicide of Citra Rashmi along with her maids and fellow royals served as the template for similar rituals centuries later in Bali. The suicide ritual called Puputan is the reason for Bali being a Hindu region today.  In 1906, Dutch invaders attacked the Kingdom of Badung, Bali and reached the palace at Denpasar. The King emerged from the palace along with 400 followers including wives, children and priests all dressed in white symbolizing the death ceremony, in a silent procession. Once they came out, they started stabbing each other instead of surrendering to the Dutch. The Dutch soldiers were stunned as the deaths mounted and many threw jewels at the startled Dutch. The king himself was stabbed by the chief priest and ultimately all the 400 died. Another 2 Puputans happened in Tabanan and Klungkung. These brave Puputans (literally meaning the end) made a serious dent on the image of the Dutch colonists back home, who strived to protect the Balinese culture and religious beliefs to salvage their reputation through Dutch Ethical Policy. The preservation of the culture unlike South America is the reason Hinduism in Bali is the dominant religion and has emerged as a popular destination for travelers.

Gajah Mada’s legacy was invoked by Indonesian nationalists in early 20th CE for unifying Indonesia. He has a university named after him in Yogyakarta, Java. Likewise, many streets in many cities including Jakarta are named after him. Even a badminton shuttlecock brand carries his name.  Remember badminton is huge in Indonesia and is its National sport.  Also, the emperor Hayam Wuruk has a main road in Jakarta named after him.

Princess Citra Rashmi’s suicide today is enacted as dance stories in Indonesia. There is a book covering this tragic saga named after her in Indonesia.

As for me, it is a realization that the end of a travel to a region is the start of the journey to understand the history of that region. I was in Probolinggo in 2015 traveling to Mount Bromo Volcano, where the 300,000 strong Hindu Tenggerese ethnic community live. These people are the descendants of the subjects of the Majapahit empire preserving their culture living in 30 villages around Mount Bromo 2. But I am still learning the history of that region and regret having not visited Trowulan or the territory where Gaja Mada lived though I was in the region.