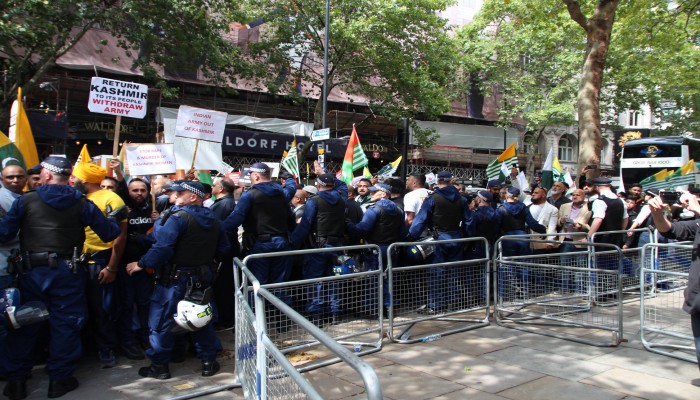 Violent protests erupted outside the Indian High Commission in London on 15th August, where thousands of Pakistani immigrants and anti-India groups took to the streets to disrupt the Indian Independence Day celebrations.

Protestors waving Pakistani and pro -Khalistani separatists flags arrived in over 50 chartered coaches from all around the country, including Birmingham, Manchester, and Bradford.  These 5000 + protestors who had only one purpose –to interrupt, intimidate and attack the peaceful Indians marking their 73rd Independence day. Hundreds of them could be seen holding up abusive placards and shouting obscenities at the Indian Diaspora.

Whilst Stone pelting had become a common attack method by separatists in Kashmir, it was now happening on the streets of London.  Stones, Frozen water bottles, large potatoes, eggs, hot coffee, explosive powders and firecrackers were being hurled at the crowd of peaceful Indians. Many were injured in process, one person receiving a nasty gash to the head after being hit with a projectile.  Petrified children as young as 4, women and elderly-none were spared from the hellfire of missiles that rained down upon them.

These riots seem to have had the blessings of Pakistani Prime Minister who in his speech the day before had said that they would be protesting 15th August as ‘Black day’ around the world. Along with Sayed Bukhari- ‘Special Assistant to the PM for Overseas Pakistanis & HRD’ was present and inciting the protesters.  Amongst the crowd, Lord Nazir Ahmed who is currently on trial for child sexual assault, and has a history of inflammatory divisive speeches was another leader instigating this aggression and rabid atmosphere.

Contrast that with professional Indians, who kept their calm and discipline in the frenzy and did not retaliate but did their best to continue their celebrations and joyous mood, until the music and dance was brought to an abrupt halt when protesters seized upon the area of Indians.

‘We were being systematically surrounded from all sides- This reminded me of the winter of 1990 and how 500, 000 + Kashmiri Hindus were hounded out of Kashmir valley with loudspeakers shouting “Kashmir banega Pakistan”( Kashmir will become Pakistan).  The slogans in the streets of London outlined the Dichotomy of fundamental fault lines in the so called Azadi or freedom movement.’ Expressed Vinod Tikoo. Another Kashmiri Pandit Lakshmi Kaul recounted that whilst standing outside India house ‘I was assaulted and directly threatened with rape if I continued to stay there and support India’.

Despite the recent Indian government decision to abrogate article 370, thereby uniting the state of Jammu & Kashmir into the union of India, this was not a political event – but one where all Indians regardless of state, religion, or political persuasion celebrated together.  Importantly, most of the Indian diaspora had absolutely no interest in politics whatsoever but just patriotism to just celebrate a day of cultural activities and performances with their families and fellow Indian brothers and sisters.  Sushil Rapatwar said his 8 year old daughter was still shaking into the night after the ordeal of the protestors screaming and threatening behaviour , with the protesters then taking further religious undertones, shouting ‘Hindu Kutta (dogs)’ and ‘Cow piss drinkers’ amongst other racist slurs.

Whilst fire crackers and smoke bombs were being thrown to frighten the mounted police horses, countless calls and twitter requests had been made to the Mayor of London Sadiq Khan and to the Metropolitan police for reinforcements, but still no response.  It was only the quick thinking of Lakshmi Kaul who in desperation called on the home secretary Priti Patel, and along with the sheer insistence through Indian diplomatic channels were trained riot police deployed over an hour later to take control and push back the protestors.

Indians were thankful to Indian High commissioner opening the doors to the mission for their refuge. When inside India house HC Mrs Ruchi Ghanashyam commended Indian peaceful resilience and bravery in the face of adversity and threats.  Nevertheless there was a serious flashpoint where these aggressive protestors had blocked the entrance to the High Commission, One Pakistani supporter on twitter later congratulating the protesters ‘We nearly got in’ (into India house).   Reminding some of another Benghazi style attack.

In a democracy, a right to peaceful protest must be respected, but planning an organised assault on an innocent community cannot be tolerated.  Who had given permission to such huge numbers of protestors in a confined space, why was there not adequate police presence and a barricaded zone for the protest, despite a spokesperson from Scotland Yard saying that police arrangements were in place?  How were security services so easily overpowered and protesters allowed to once again burn the Indian flag?

Questions need to be asked of the authorities, including Mayor Khan, who is responsible for law and order in the capital. Have they not learned anything from past experience with aggressive anti-India protests and public disorder transpire during both visits to the UK by democratically elected Indian Prime Minister Narendra Modi?   Why have only 4 people have been arrested, (including one who attempted to stab a police officer) when hundreds were complicit in this violence?

To this point the Mayor of London is yet to make a statement on the events that occurred. Who is guilty for the systematic intelligence failure despite authorities being made aware of potential hazards from high octane environment surrounding the recent Kashmir issue? Who is to blame for the innocent people being made to feel like they are in a warzone? Will lawlessness be the status quo in the future, with police and media also being assaulted? Whilst government leaders including PM Boris Johnson and the Home secretary all consider India as a ‘friend’ and partner going forward wanting favourable deals with India-why the indifference towards Indians from all the government?

Ultimately, the Indian Government is within its rights to amend its constitution.  The ‘Jammu & Kashmir Reorganisation bill’ as it is formally known, democratically received majority approval in both houses of Indian parliament. This historic bill giving equal rights to all citizens of Jammu, Kashmir and Ladakh, with an opportunity for development, prosperity, stability and peace that has been missing in the region since India’s Independence.

Why has the UK media kept quiet on the plight of the Kashmiri Hindus and Indians, some  media houses even calling it a ‘peaceful protest’, whilst the protests causing road blockages, violence, carnage and injury to pensioners seemed to pass them by?  It is about time they stopped looking at it through their emerald tinted glasses and see the true picture.

Are people of Indian origin not safe in this country? A Kashmiri Hindu traumatised by the events, described ‘it is now a 5th generation of my family who has been affected by this issue- my family was killed by extremists, I was exiled out of Kashmir, and now we are being chased across the world facing the same extremist slogans, same ideology and same threats.” Will authorities take tough action on perpetrators and organisers of violent protests?

Is London under Sadiq Khan turning more intolerant and dangerous for the peaceful Indian community who are an intrinsically integrated part of society? 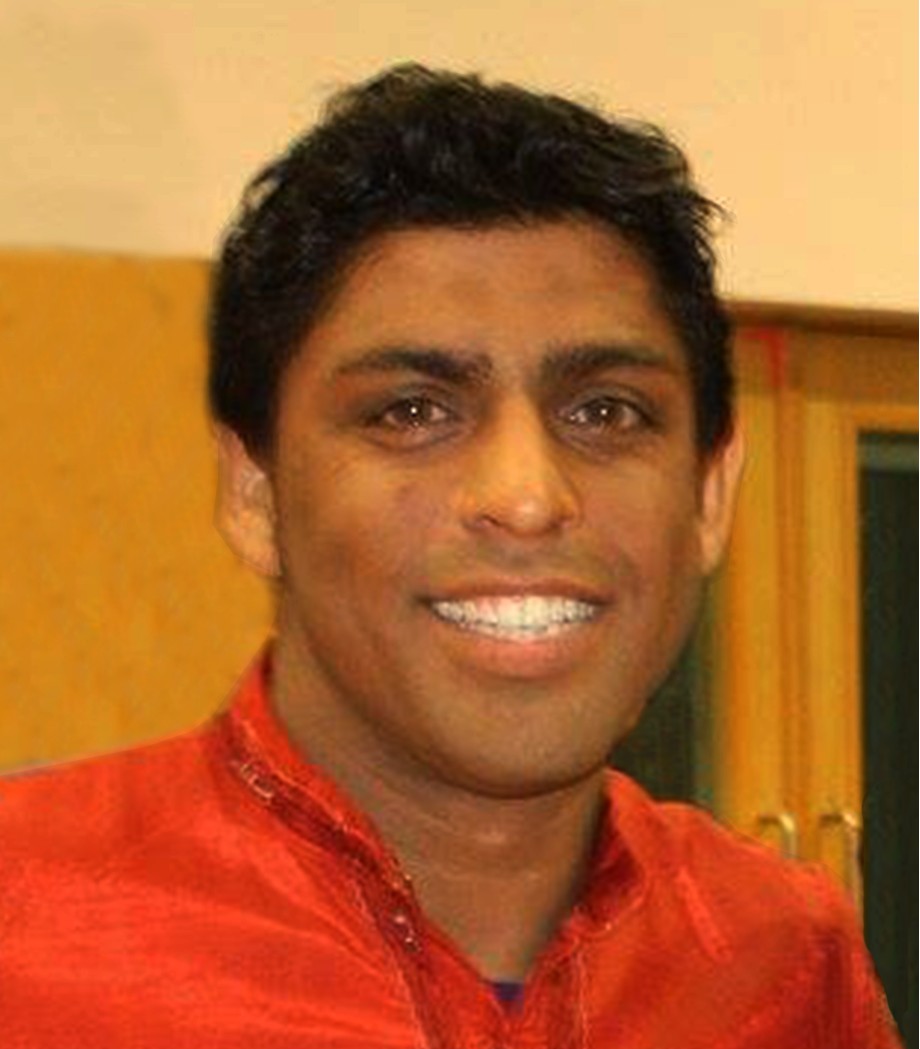