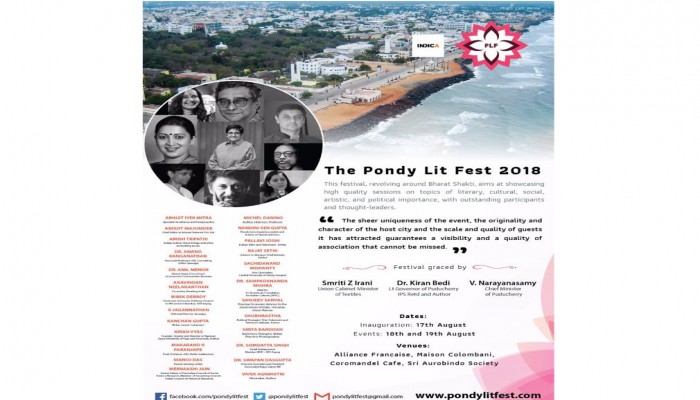 Amidst the plethora of Literature festivals that have sprouted in last few years, The Pondy Lit Fest (PLF) 2018 aspires to be “different, if not unique, in the circuit of arts and ideas festivals in India and abroad”. The festival will be held in picturesque Puducherry from August 17th to August 19th 2018.

Amish Tripathi, Jay Panda, Bibek Debroy, Sanjeev Sanyal, Swapan Dasgupta are few of the notable speakers of the festival. Many speakers and authors are from Puducherry. PLF is hoping to Puducherry on the literary map of the world and promote it as a destination where best minds in the world congregate every year to discuss ideas. Puducherry is an interesting blend of Tamil and Indo-French culture. According to the organizers, Puducherry, with its multi-domain and diverse pool of talented national and international experts, can well aim to become a hub of smart thinking and ideas for India and the rest of the world.

Debating is intrinsic to Indic ethos. No other civilization has put as much emphasis on debates and exchange of ideas as much as Indic civilization. PLF 2018, modern in its appeal yet emphasizing on civilizational greatness of India, promises to be a great platform for thought leaders to come together and ‘vigorously but rationally’ debate and discuss.