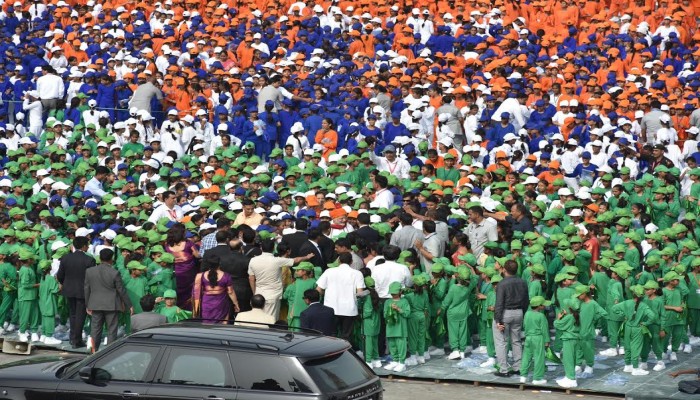 Bharatvarsh - a poetry of eternity, which existed before the beginning of time and will very well survive beyond it. The womb which gave birth to life and also became the cradle of civilizations. The Jagatguru who taught science and culture to the world while also having a monopoly over the global trade and economy for the longest duration till date. The land of dharma - Bharatiya, Hindu, Sanatani, where dharma is a way of life and the way of life is rooted to dharma. Also the land of Dharmrakshaks who lived and died for its protection.

A cry escapes my heart when I see questions being raised about the 'Idea of India'. When people from other nations - whose age of existence would probably count as infancy against India - question the authority or the ability of India as a nation, I get angry. But the true fire rages on when the sons of our motherland themselves discredit our nation. When Indians claim there was no India before 1947, or that there was no prosperity and culture before followers of desert cult took over, blood boils. How did we reach this stage? Why are we not 'Ghamandi' enough for being Indian.

Being an eternal moral optimist, I believe that the Political leadership of our nation during the 1947 independence movement truly had the interest of our nation at heart. While their actions might have led to ill-effects, I would stay away from judging their intentions. That the partition of our great nation was on the basis of Religion cannot be debated. However, in order to probably play down the communal tension and create an environment of co-existence between the warring communities, the partition was appropriated towards all possible factors but not religion. An oft-overlooked disservice of this was that our cultural identities took precedence in a lot of matters while the national identity got downplayed.

As a result, Bangla pride in West Bengal transcends borders, Tamil Nadu heart finds resonance with Tamilians in Srilanka and Kashmiriyat gets misguided by Pakistani propaganda.

Look at the surface narrative in West Bengal of today. While Bangladeshi infiltrators might be a national security threat, they still find place in the heart and cities of West Bengal. Assured that no one can touch them as long as they are in West Bengal. Go back a couple of decades and an ex Indian Prime Minister was assassinated by Indian Tamils, for his misadventure against Tamilians in SriLanka. Kashmir - the land of Rishi Kashyap exhibits Kashmiriyat which is devoid of its primary constituents i.e. Kashmiri Pandits.

The downplaying of national identity didn't just happen by putting Culture before Nation. There was also the other play in action. One of Religion before Nation. How else will you explain the destruction of Indian properties by Indian Muslims to support Palestinian Muslims? However, the cultural identity appropriation was limited only to the Majority population. The major 'minority' connected with its religious brethren across the globe with the blood bond.

One of the biggest change since 2014 has been the subtle restoration of 'Bharatiya Asmita' - within India and outside it. Nationalism is now becoming central to our identity once again and conversations as well as narratives are shifting. The shift might be slow, but is undeniable.

This raises hope. Finally, all of us will stop being apologetic about being Indian, rather we would assert it with pride. The new India will rise by embracing the ancient one.  The underlying inherent undercurrent of inferior will make way for a more assertive confidence. It would not be supremacist - as that is not our dharma - but will be based on the principal of equality.

Even if only for this, I am forever indebted to Prime Minister Narendra Modi.