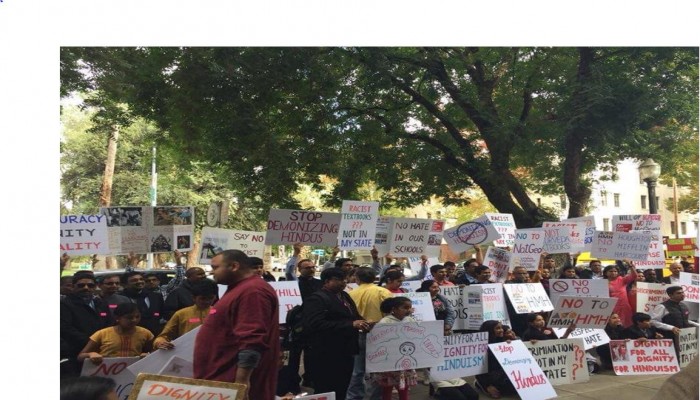 On November 9th, the California State Board of Education ratified the recommendations made by the Instructional Quality Commission on September 28th.

In September, the Instructional Quality Commission (IQC) of the California Department of Education had voted to recommend that Houghton Mifflin Harcourt’s (HMH) Kids Discovery & Social Studies Programs be rejected for California based specifically on

·       52 specific instances in HMH’s texts that were historically inaccurate, had adverse reflection against Hinduism, failed to adhere to the History Social Science Framework (adopted by the State Board of Education in 2016), and failed to adhere to California Education codes as discussed in a letter to them from Hindupedia

·       More than 3,000 edits proposed by HMH which would amount to “rewrites,” something not allowed in the state’s process.

They also voted to adopt many of the edits recommended by Prof. Jeffry Long of Elizabethtown College to McGraw Hill’s texts.  Other than for HMH and Studies Weekly, they adopted most of the changes being requested by the LGBTQ community to bring those texts in line with the FAIR act.

On November 9th, approximately 800 people including many children from across California came to Sacramento to ask the SBE to ensure that textbooks are culturally competent and equitable in their coverage of India & Hinduism.

The State Board of Education (SBE) in days leading up to the hearing had received thousands of letters from Hindu American parents, children, educators and community members from across California, including immigrant Hindus from Fiji, Caribbean and India, as well as letters from a broad coalition of more than 75 interfaith and community groups, 17 state and federal elected officials, and 75 leading academics.  On the day of the hearing, they listened to testimony from approximately 500 people.

Many parents & children who testified talked to their negative experiences with the current California curricula discussing the children being bullied, being ashamed of their religion or being mocked by their teachers.  They felt that other students would be forced to repeat their experience if the textbooks were approved as is.  Other messages that found repetition included an ask that.  Others asked why translations of Hindu scriptures were used by translators outside of the tradition as opposed to excerpts for other religions.

“Its really exciting to see how many people are passionate enough about protecting our children’s future to come to Sacramento during a weekday.  It is important that textbooks present our culture in our voice as is done for other cultures and religions” said Balimardana Das.

Mala Gavin, a retired educator expressed her concern during her testimony.  She reminded SBE commissioners that “all teachers were trained on Cultural Proficiency recently.  So, how could they approve textbooks that are filled with bias and misinformation? “

At the end, the SBE voted unanimously to adopt the recommendations by the IQC. They rejected HMH’s two programs and adopted the remaining 8 programs from the other publishers as long as the publishers implemented the edits recommended by the IQC.   Commissioner Rucker, in the final deliberations, stated that “history social sciences always raise people’s passion as it provides a personal history.  While there will always be disputes but textbooks are not the place to resolve them.”

The SBE’s decision is technically limited in scope to school districts in California, however, majority of states either follow the guidelines and textbooks approved in California or are deeply influenced by them.  The only other states to have a formal approval process are Texas and New York.