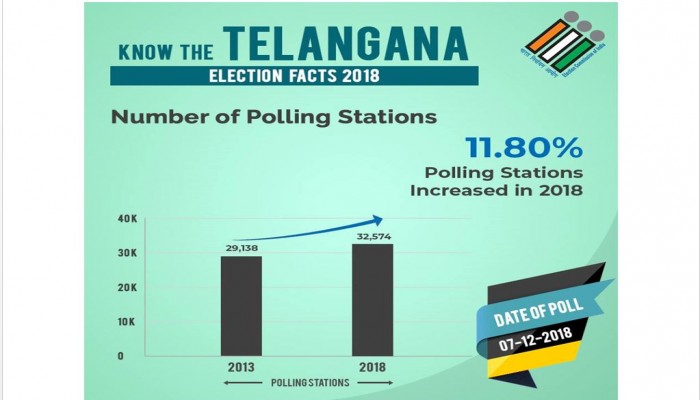 Sometime early this year (2018), Congress leader M. Shashidhar Reddy held multiple press conferences accusing that nearly 20 lakh voter names have been deleted from the electoral rolls. Many figured that this is one of those vague conspiracy theories of the Congress party. So while media covered the pressers, it didn’t look like they were taken to any logical conclusion. Also, at that point of time, no one was worried too much because elections are scheduled in 2019, and when the 2019 revised list is out, this can be taken seriously.

Come September, the Telangana Assembly was dissolved. Elections were scheduled for December. Very strangely, the Election Commission insisted that the cutoff date for 18 years of age is January 1, 2018 (for an election being conducted in December 2018)! That’s a full one year!

Announcements were indeed made announcing the revision of electoral rolls, and also urging people to reapply if there is a discrepancy. Once the final list was published, the completely opaque manner of the functioning of the Election Commission has come to the fore.

The first issue is the duplication of names. Allow me to present a couple of examples for Electoral booth number 96 in a constituency from Hyderabad (I have blacked out some information). By the way, believe it or not - The “PDF Electoral” rolls available on the EC site are not searchable via “CTRL+F!! So if you have to wade deep, you actually need to go over the rolls one by one! Am sure if you make this searchable, then more skeletons will tumble out easily.

These are not isolated instances – I have personally known folks whose names have been duplicated in the *same* booth! It is one thing for duplication to be available at different booths (given how many folks reapply once they change their constituency), but what explains duplication in the same booth? Well, today’s newspaper even had a report of Triplication in a booth !

Under these circumstances, how do we trust the Election Commission number that only 48% of Hyderabad voted? Why should we get bombarded with silly comparisons when the base data itself is very wrong? These are not isolated instances, but have been reported on a widespread manner. What recuse would the citizens have once the “final electoral rolls” have been published? Where is the corrective mechanism for the Election Commission to remove these duplicates and triplicates?

The second issue and a much bigger issue is the deletion of names from Electoral rolls. And yet again, no one has any idea why names got deleted! People who have voted for 30 to 40 years from the same constituency have visited to polling booths only to find their names deleted. They had no other recuse. Imagine the sincerity of these citizens who have voted for 30 to 40 years. Now imagine the pain of these citizens to be told that their names have been deleted. Imagine the pain of 92 year old, Sri Y Chenna Reddy whose name was deleted from the electoral roll.

Initial media reports on the polling day focused on how some important people lost their votes – the biggest one being a serving IPS office of DGP rank!

Then came the shuttler Jwala Gutta. And then many many instances of citizens not finding their names in the electoral rolls came to light. The number was slowly touted to be in the 1000s. Today, that number has been rumored to be in lakhs! Well, that is what the telugu media is reporting. Exaggeration or not – it is a fact that thousands of citizens have had their votes deleted from the “final” electoral rolls. You can safely lay the blame on the citizens themselves – why didn’t they check before? Why didn’t they reapply before? And so on. But please ask yourself, how fair is it to blame 92 year old Y Channa Reddy? Or is it fair to blame an IPS officer if the name is deleted from the *final* rolls. There is nothing, absolutely nothing that you can do once the *final* list is out. No one knows the rationale behind deletion of votes, addition of votes, duplication & triplication of votes.

Why should I keep checking multiple revisions of electoral rolls and reapplying from time to time. The Election Commission tells us that legal notices were served before deletion of rolls. Nothing can be farther from truth on this – instead of accepting their lax role, the commission is continuing to behave as if this is a small aberration.

The third issue is the official declaration of the voting percentages. On the evening of the polling (7th December), an indicative figure of 67% was given. We were told the number is in line with 2014 elections, and any revision of this number will not be too significant. After a whopping 28 hours, yes 28 hours, the election commission releases the final figure – 73.2%. Now, do anyone of you recall such a high percentage gap between the initial figure to the final figure? How can such a huge variation be even possible?

And the icing on the cake is that the voting percentage in Hyderabad has been reduced by 2% compared to the initial estimates!

The Election Commission has a lot to answer for, from these Telangana elections. An apology has been issued with a promise to correct these discrepancies for the upcoming Lok Sabha elections. However, this issue is more serious than a mere apology. The Election Commission must come clean on how this mess has happened in Telangana. , and how exactly they plan to correct this.