The Dangerous Predicament of Disruptive Politics 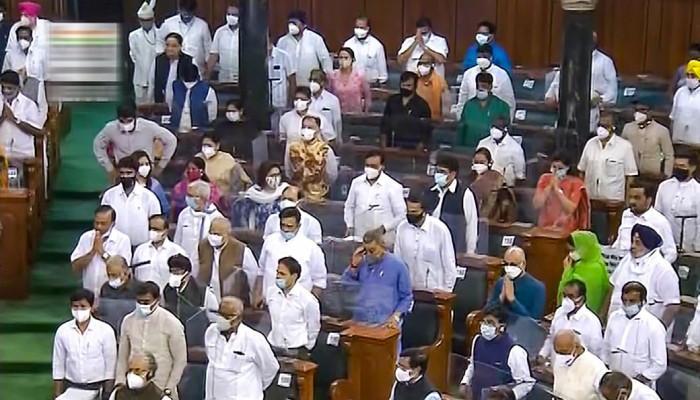 Debate in World’s largest democracy is slowly replaced by disruption. The Parliament, a hallowed platform for critical and constructive debate is turning into an arena of disruption. Revered as a towering encomium of structured debates that laid foundations for the country, the Parliament has now turned into a platform for hooliganism.

Hailed as conglomeration of greatest minds committed for the welfare of the country, the debates in Parliament used to be the trusted source for analysing the nitty-gritties of any proposed legislations from the houses of representatives. But over the years the quality of such rational thinking and the civilised behaviour expected of an iconic legislative body has shrunk.

Instead of respectable debates, the Parliament has become podium for heckling, choicest weapon for settling political scores. Devoid of decency and sane demeanour, besides setting the bad precedent the planned Parliamentary session is turning into notorious spectre of disruptive politics.

Ever since its ascent into power in 2014, the Modi government is accused of being “intolerant, fascist and vicious” by the opposition. But the unabated disruptive politicking ahead of every consecutive parliamentary session has left the common man thinking as who is the right fit for the above sobriquets.

Even before a parliamentary session could kick-in the entire ecosystem is set into motion to overwhelm the political realm with some conspiracy theory or the other. Leaving no space for debate, the media houses with its extensive reach are set into an overdrive of playing the role of an investigator, prosecutor as well as jury.

Interestingly, this cyclical repetition or in fact over use of this new trend of disruption is becoming more predictive. Bereft of productive discussions on issues of development, growth, welfare and progress the vicious underbelly of an intolerance towards the current dispensation is becoming more obvious now.

Despite the best efforts of the opposition to give these conspiracies hewn mostly in foreign countries a different name through its propaganda machinery, the ugly face of its origins and diabolical intentions are getting unravelled. The series of the tool kits designed to create chaos and generate disaffection towards the dispensation have only accentuated the inimical designs of the opposition.

Deconstruction of the unravelled toolkits in recent times has neatly exposed the links between the Indian political parties and their foreign offshore agencies. Rapid busting of a couple of tool kits in tandem in the recent past and their consequent attempts to create unrest in the country has created a doubt in common man about the new kind of politicking employed by the opposition. Bordering on doubt and distrust, the overuse of the foreign agencies for domestic politics has now bolstered the theory of plausible foreign conspiracies at play is taking seed in Indian minds.

Rightly so, just a day ahead of the Monsoon Session of the Parliament, the opposition raked up a spying row and accused government of hacking using the Israeli Pegasus spyware and sought a probe. The Wire first carried out a report stating that 40 Indian journalists are on hacking list of an unidentified agency using the Israeli spyware Pegasus. The list includes journalists at the Hindustan Times, The Hindu, The Wire, The Indian Express, News18, India Today etc.

Indeed, the basis of the report is that a consortium, Forbidden Stories, a non-profit Paris-based journalism and Amnesty International has access to a list of phone numbers living in countries believed to be clients of NSO group, an Israeli firm known for its spyware. These agencies have shared this info to some 15 international agencies. Forbidden Stories claims to have overseen the Pegasus report.

IT Minister Ashwin Vaishnaw on the floor of the Parliament reiterated, “In India there is a well-established procedure through which lawful interception of electronic communication is carried out for the purpose of national security, particularly on the occurrence of any public emergency or in the interest of public safety, by agencies at the centre and states. The request for this lawful interception of electronic communication is made as per relevant rules under the provisions of section 5(2) of Indian Telegraph Act, 1885 and section 69 of the Informational Technology Act, 2000. The procedure therefore ensures that any interception or monitoring of any information is done as per due process of law. The framework and institutions have withstood the test of time”.

He also debunked the charges of opposition by quoting the statement issued by NSO, the company which owns the spyware that the leaked data (released/disseminated) by HLR Lookup services, - “(is)openly available to anyone, anywhere and anytime and are commonly used by governmental agencies as well as by private companies worldwide. It is also beyond dispute that that data has nothing to do with surveillance or with NSO, so there can be no factual basis to suggest that a use of data somehow equates to surveillance”1.

Moreover, the Wire Report, which has been the basis for opposition’s tirade against government has stated- “the presence of a number in the database indicates its likely selection as a target for surveillance but whether a phone was actually hacked and infected can only be established through forensic examination of the device”2.

In the run up to 2019 Lok Sabha elections, opposition has stalled the Parliament on similar charges blaming the government of hacking anti-establishment leaders using Pegasus on Whatsapp. But Supreme Court categorically dismissed all these fictitious claims which had no factual basis. Even all the political parties accepted SC’s ruling. A repeat of similar episode before the onset of a new Parliamentary session can’t be a sheer coincidence.

Having just recovered from a Tsunami of Covid wave that has put country’s meagre resources under severe strain, it is duty of government and the elected leaders to evolve a framework to avert another Covid wave and ensure pandemic preparedness. Instead, the opposition has resorted to a ludicrous game plan of obstructing the functioning of the Parliament on the charges of infringement of right to privacy and the concomitant threat to democracy.

Seriously the charges of spying can’t be ignored.  The agencies have advised affected persons to submit their devices believed to be hacked for forensic examination to factually establish the claims. But instead of relying on the logical scientific investigation that can lend credence to their claims the opposition has resorting to disruption.

On the opening day of the session, Opposition through relentless sloganeering heckled the Prime Minister and interrupted the ‘customary’ introduction of new ministers of Cabinet. Similar ruckus was witnessed in both the Houses forcing an adjournment. According to reports, government proposed to discuss 31 bills during the 19-day long session.

Pegasus spying has snowballed into a massive row with political parties insisting on thorough investigation and resignation of Home Minister Amit Shah. Amid ruckus, both the houses of Parliament are adjourned till Thursday.

The spectacle of disruptive politicking is long past its sell by date now. Aspirational Indians are seeking solutions to put the country back on economic trajectory. By failing to contest an orchestrated propaganda to malign Indian institutions and democracy by the Western agencies especially since the turn of the year all for their hate for a single man, opposition has been complicit in bad mouthing of India.

Parliament session has been an opportunity to assert their commitment to nation. But instead of pulling up the government for glaring lacunae, the inconsistencies in delivery and policies that compounded the Covid crisis, by disapproving a debate, they have abdicated their duties as people’s representatives. They have undermined the Parliamentary Democracy.

While the charges of government posing threat to democracy by throttling dissent remains to be established, by hampering the functioning of the Parliament the opposition has certainly brought the Indian democracy to a dangerous precipice.

In their obsession to stay relevant in the political realm through disruption, the political parties are furthering their descent into abyss of irrelevance.