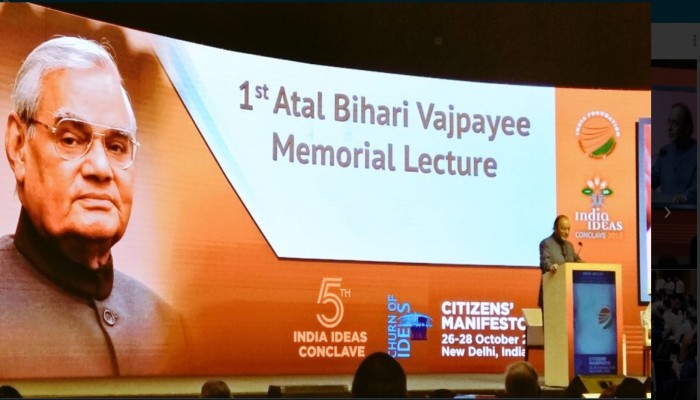 The discovery of the unknown is a fascinating experience. And when it happens at an unexpected place and time, the experience becomes memorable too! I had many such experiences at the recently concluded India Ideas Conclave and would like to share some of my learnings.

Meet 38 year old MP, Atal Bihari Vajpayee. The 1st Atal Bihari Vajpayee memorial lecture was delivered by Mr. Arun Jaitley. Before the lecture began, a video was played on Shri Vajpayee. It contained an excerpt from his awesome speech in 1996, announcing his resignation as Prime Minister of India. The large hall reverberated with the spontaneous applause of the delegates (Many of us had goose bumps listening to it on a big sound system) – a testimony of the impact Shri Vajpayee had on this country. Speaking on this occasion, Shri Arun Jaitley told the audience that in his opinion, Vajpayee’s best speech was the tribute he paid to Nehru in Lok Sabha in May 1964. Arun Jaitley read out the first two paragraphs of the speech (from ~14:00 here). The audience was spell bound after listening to it. Arun Jaitley captured the mood well - how could a 38 year old MP could wax so eloquent with such powerful language about his principal political adversary. Arun Jaitley asked us to reflect if opposition parties today are capable of such maturity. We also can’t help but wonder if the antics-loving, hatred-spreading “young” 48 year old MP can rise up to any occasion that will benefit the country!

As usual, the English media chose only to highlight small portions of his speech that had some reference to the recent Sabarimala crisis. However, Arun Jaitley spoke about Atal Bihari Vajpayee’s unmatched contributions to India; the challenges that our democracy currently faces that includes opposition leaders standing by those who chant “Bharat tere tukde honge”. His 45 minute memorial lecture was truly befitting a man of Shri Atal Bihari Vajpayee’s stature. A benchmark has been set, and will be a difficult act to follow.

Meet Mr. Yogi Adityanath, Chief Minister of UP. Yeah right, as if you didn’t know who he was! But we really met the Chief Minister of Uttar Pradesh! Mr. Yogi Adityanath gave us great details on the many problems that are being overcome by UP. For example, riots were a regular feature pre-2017. There have been no riots since the past 18 months. While the outside world is only aware of the tough measures taken on goons, many small steps like having all police walk on the streets; making them behave more people friendly so that people would want to approach them etc were never known. Yogi Adityanath used this opportunity to explain those in detail.

We were then told a very interesting problem that was solved. Whilst the entire English media was outraging about police showering flowers on those participating in the Kanwar yatra, Yogi explained that this move served two purposes – aerial survey to ensure that the yatra was going peacefully and following SC guidelines + showering flowers on the yatris. Little wonder that the English media picked up only one side of the story.

About 65 lakh students appear for exams in UP. Copying in exams was a rampant thing in UP. Many students from other states also used to apply for exam in UP because all they had to do is apply and some “Munnabhai” used to write the exam for them and behold – you have a certificate! Many small steps were taken to solve this problem – CCTV cameras, multiple sets of Question paper, strict messaging to the Education Officers to inspect every single exam center (he told us details of his phone conversations!) – despite all this, when reports of one bundle missing came in, he filed an FIR against a plethora of officers! The result – nearly 15 lakh students didn’t even turn up for the exam! Today, exams are held in a free and fair manner.

We were told about how 30 lakh fake ration cards were eliminated; how bureaucratic hurdles were surpassed to hold a successful UP investor summit; how UP is making strides in Swacchh Bharat; how a new Deepawali was celebrated in Ayodhya; how electricity is no more a problem (he was quoting generation numbers); how a strong and decisive leadership can usher in good governance with the same bureaucracy. His seminal speech exposed to us a leader who had a firm grip on detail and his administration. Hence my statement earlier - we met the Chief Minister of UP, not a politician who regaled us with rhetoric.

Meet Ms. Geetha Kothapalli, Member of Lok Sabha from the second largest (area) constituency, Araku from Andhra Pradesh. My impression of MPs from the telugu states is that they are generally aloof, are very difficult to have conversations with and have a lot of arrogance. Ms. Geetha has shattered all of these impression within just 10 minutes of interacting with her! Her earthy approach towards conversations was so pleasant that I felt very happy to have been proven wrong! On stage, she was a panelist on “Politics of accountability” and has argued how the legislature is the only institution that must face an exam every 5 years, whilst the executive and judiciary do not have to worry about such accountability. For a question on how bills can be passed in 2 minutes, she has also told the audience that the 16th Lok Sabha, except for the last two sessions, has discussed and debated on many bills; and the hectic workload of MPs that range from attending committee hearings, making laws, reading reports and solving multiple problems of the people.

Off stage she has enlightened us on how the glass train for a trip to Araku has increased tourism to the area. With increasing popularity, Railways will now soon add a second coach to this train. She also spoke about the poor infrastructure to the predominantly tribal areas in her constituency. And about how organic farming is going to help the women of Araku; about how tribals need a more electoral & political participation; about the menace of money in politics and about her learnings while talking to people of her constituency.

Meet Mr. Lobsang Phuntsok, a Buddhist monk and founder of Jhamtse Gatsal Children’s Community in the Tawang district of Arunachal Pradesh. Mr. Lobsang Phuntsok won the Swarajya “Sree Narayana Guru award” for social work. Most of us in the audience never heard of the awesome work that Mr. Lobsang’ s team does in helping children from the remotest villages in Arunachal Pradesh. Earthy humor of Mr. Lobsang was on full display when he was wondering on how India Foundation was able to find out about his work, that happens 45kms from China border and an hour away from Tibet! I also had to further fortune of talking to him off stage.

Meet Shamika Ravi who gave a short speech in which she linked health schemes such as Swachh Bharat to economic prosperity. At least I never looked at this in that angle and found it an apt and also a unique way to look at the success. Infact minister Piyush Goyal told the audience that as of today, every house in MP and Bihar now has access to electricity. Prosperity is all about ensuring that the basic needs are always available – and what better way than to ensure health and electricity for all! Meet Sanjay Paswan, MLC from Bihar who spoke eloquently and with great nuance on the topic of reservations.

And finally meet the Indian English Media, that doesn’t learn anything from anyone at any time! Various representatives of the English media still live in denial. We are told by their representatives only that they don’t have their ears to\ the ground. If so, it is a mystery why they continue the programming they show! President of Editors Guild, Shekhar Gupta spoke on the topic of “Agenda for Peace”. I had the opportunity to ask him about how the English media is on the forefront to spread news that disrupt peace in the country. He invented a circuitous reply so that we are left confused at the end as to what he even said!

These are only a few points that I have discussed here, as opposed to the multitude of people I have had an opportunity to listen to and interact with. It would not be an exaggeration to say that the India Ideas Conclave has yet again provided a great learning platform to exchange ideas and discuss solutions.