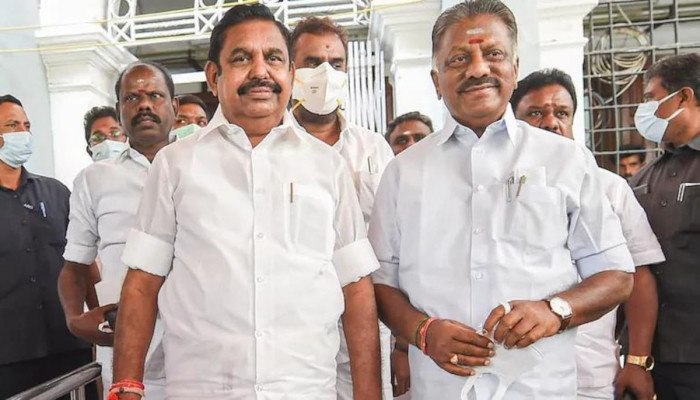 While the intense political drama in Maharashtra continues unabated, another one is unfolding in Tamil Nadu where the BJP ally AIADMK is struggling with a widening split in its top leadership amid the demand for a “singular leadership” in the party.

AIADMK coordinator O Panneerselvam (OPS) and his supporters, who favour “dual leadership”, walked out of the meeting that reported violent scenes. Apparently, OPS supporters were abused and attacked by those owing allegiance to EPS.

Tamil Nadu Chief Minister MK Stalin mocked AIADMK saying that “those who wanted to decimate his party (DMK) had now been wiped out”.

OPS had moved the Madras High Court on Wednesday night, pleading to prevent the scheduled meeting and party bylaws from being amended. If the bylaws get amended, EPS could be elected as the party’s General Secretary.

After the death of J Jayalalitha, the post of General Secretary was abolished and OPS named the coordinator and EPS the joint coordinator.

The EPS side wants him to take over the sole leadership of the party. OPS and his supporters want dual leadership to continue.

Simmering under-the-surface for a while now, the division between the two groups reignited and came into the open around the time of the announcement of the names for the recent Rajya Sabha elections.

Supporters of EPS, who is also the Leader of Opposition in the Assembly, raised the demand for “singular leadership” at the meeting called to discuss plans for today’s GC.

The BJP, which is trying hard to be relevant in the southern state via AIADMK, is closely watching the internal developments within its ally, sources said.

Though Prime Minister Narendra Modi had tried to put an end to the raging debate over the ‘Hindi imposition’, AIADMK cadres are believed to be against the alliance with the BJP, especially after the language row.

The general feeling is that the party should approach the 2024 General Election with a clean slate.

Jayalalithaa’s long-time confidant VK Sasikala is also making the most of the division, taking on the current leadership for being a “weak opposition” to the ruling DMK.