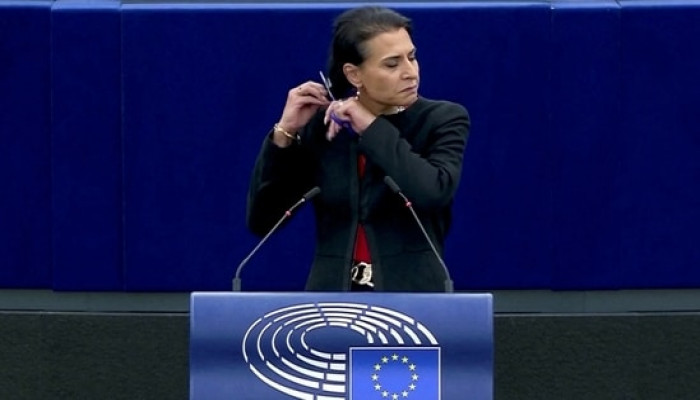 As the anti-Hijab protests gear momentum in Iran, a Swedish Euro MP also chopped off her hair in the parliament a solid show of camaraderie and support for the women demonstrating for their rights. The said politician is demanding European Union’s action against Tehran against the stringent hijab laws.

The anti-Hijab demonstrations, which saw several Iranian women removing their headscarves and cutting their hair as a show of resistance, began after a young woman was killed for not wearing a headscarf in Iran.

"We, the people and citizens in the EU, demand the unconditional and immediate halt of all violence against women and men in Iran," AFP quoted Abir al-Sahlani of the centrist Renew group as saying.

"Until Iran is free our fury will be bigger than the oppressors. Until you, the women of Iran are free, we are going to stand with you," said the deputy before taking out a pair of scissors and hacking her hair.

According to a video posted on the parliament’s website, the MP shouted "Women, Life, Freedom!" holding up a lump of hair.

The parliamentary protest was seen on the same day many French celebrities including Isabelle Huppert, Juliette Binoche and Marion Cotillard, posted videos of chopping their hair off on social media in support of the anti-Hijab demonstrations.

Chopping off hair became a symbol of resistance and show of solidarity among women globally toward the anti-Hijab protest, which advocates for a woman’s choice and free will to wear whatever she wants.

The anti-Hijab protests were sparked by the death of 22-year-old Mahsa Amini, following her arrest by Iran's "morality police" who enforce a strict dress code requiring women to cover their hair in public. Reportedly, many women in recent years became victims of assault and violence due to moral policing.