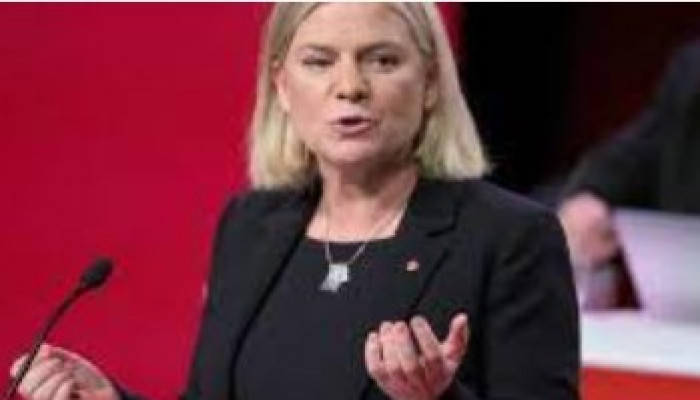 The Swedish parliament has voted to make Magdalena Andersson the country's first female premier after she replaced Stefan Lofven as leader of the Social Democrats on the center-left.

Only Sweden has never elected a woman as a national leader. The vote on Wednesday failed to elect Andersson, who is currently finance minister. In spite of that, she was elected because she only needed a majority of MPs not to vote against her. Standing ovations were given to the 54-year-old Social Democrat leader by sections of the Swedish parliament, or Riksdag.

She became the head of a minority government after striking an 11th-hour deal with the opposition left party in exchange for higher pensions for many Swedes. In addition to the Greens, she had the support of the Centre party. There were 174 votes against her in the Riksdag, which consists of 349 members. 57 additional MPs abstained, which gave her victory by a single vote on top of the 117 who backed her.

She started her political career in 1996 as a political adviser to the then-Prime Minister Goran Persson. She was a junior swimming champion from the university city of Uppsala. She served as finance minister for seven years.

It will be a tough job for her from the start, as extreme right-wing parties have threatened to reject the government's 2022 budget. Despite backing her for the job of prime minister, the Centre party says it will not support a finance package from a government that is "moving far to the left".

The fact that Sweden has not had a female prime minister yet is a paradox, considering the country's self-proclaimed "feminist government" and its "gender-equal" policies like shared parental leave. In all other Nordic countries, women are currently or have previously held leadership positions.

It was Gro Harlem Brundtland in Norway who first led the country in 1981. In Sweden, women have long had a strong political presence, so it is hard to explain why the country has lagged behind its neighbours. The majority of MPs are female.

With the exception of Andersson's Social Democrats, six out of eight parties in parliament are led by women.

In part, this is due to the fact that the Social Democrats have had long periods in power, and parties in power are less likely to replace their leaders as frequently. Tragic events may have also played a part.

During the early 2000s, Foreign Minister Anna Lindh was considered a possible successor to Social Democratic Prime Minister Goran Persson, but she was killed in a stabbing attack. From 2007 to 2011, Mona Sahlin was party leader, but her leadership was low and she lost the 2010 election.