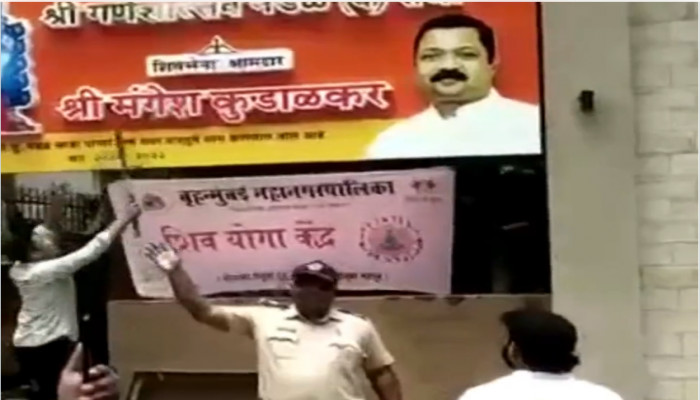 Shiv Sena workers on Friday vandalised a board outside the office of party MLA Mangesh Kudalkar, who is part of the group of rebel legislators led by senior Maharashtra minister Eknath Shinde, police said.

Kudalkar represents the Kurla Assembly constituency of Mumbai. He is camping in Guwahati along with Shinde and other Sena MLAs who have rebelled against Maharashtra Chief Minister Uddhav Thackeray.

A group of Shiv Sena supporters gathered outside Kudalkar's office in the Nehrunagar area of Kurla and tried to smash up a board bearing his name and photograph, said a police official.

Before they could attack the MLA's office, police personnel on the spot intervened, following which they dispersed, he added.

Mumbai Police have stepped up security at several locations, including Shiv Sena ‘shakhas' (local offices) in the city to prevent any untoward incident following Shinde's rebellion.

Sena has, however, said that it can consider walking out of the alliance if the rebel leaders return to Mumbai from Guwahati.

Earlier in the day, Raut said that the Sena will win on the floor of the House, and on the streets. "They (MLAs) have taken a very wrong step. We also gave them a chance to return to Mumbai. Now, we challenge them to come to Mumbai," he said.

"We won't relent...we'll win on the floor of the House. If this battle is fought on roads, we will win that too. We gave an opportunity to those who left, now it's too late. I challenge them to come on the floor of the house. The MVA government will complete the remaining 2.5 years," he said.

Eknath Shinde, who is a sitting minister in the MVA government, is leading the rebellion against CM Uddhav Thackerey. He claims that he has the support of 50 MLAs (38 from Sena and independents). The rebel MLAs have been asking the chief minister to quit the MVA alliance and form the government with the BJP.